#MSBlog: If you have had a brainstem attack you may be at risk of sleep abnormalities.

“This is a reposting in response to an email I received from a reader and correspondence recently published in Neurology in response to the following article.”


BACKGROUND: The objectives of this cross-sectional study were to assess the prevalence and severity of sleep apnea in MSers referred for overnight polysomnography (PSG) and to explore the radiographic and clinical features that might signal risk for undiagnosed sleep apnea.


METHODS: Apnea-hypopnea (AHI) and central apnea indices (CAI) from laboratory-based PSG among 48 MSers were compared with those of group A, 84 sleep laboratory-referred patients without MS matched for age, gender, and body mass index; and group B, a separate group of 48 randomly selected, referred patients.


CONCLUSIONS: These data suggest a predisposition for obstructive sleep apnea and accompanying central apneas among MSers, particularly among those with brainstem involvement.

“We are aware of the sleep problem in MSers, but we rarely test for them. Maybe we should change our practice and screen people more. What do you think? The following is a quick screening questionnaire to assess whether or not you have a sleep disorder. I have designed it as both a self screening tool and an anonymous survey so that we can use the data to see how common the different types of sleep disorders are among MSers who read this blog.”


“It is interesting that when we completed a sleep survey via this blog the majority of MSers had a sleep problem. It will  therefore be interesting to see the results of this survey. Thanks.” 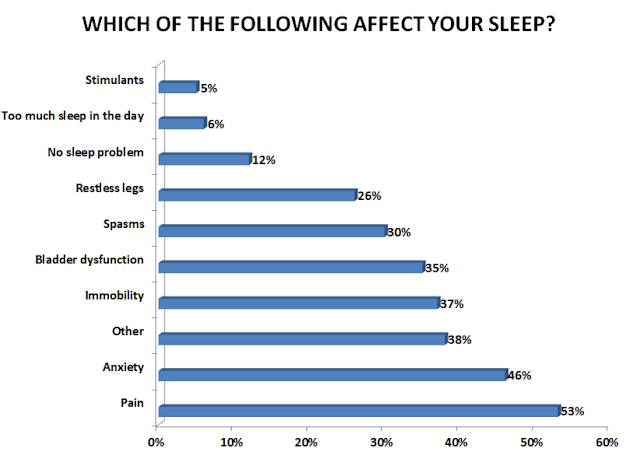