Rosato Siri MV, Badaracco ME, Pasquini JM.Glatiramer Promotes Oligodendroglial Cell Maturation In A Cuprizone-Induced Demyelination Model. Neurochem Int. 2013 Apr. doi:pii: S0197-0186(13)00131-9. 10.1016/j.neuint.2013.04.008. [Epub ahead of print]
The therapeutic potential of glatiramer acetate (GA) in Multiple Sclerosis has been apparent for many years and has been proven effective in Experimental Allergic Encephalomyelitis, one of its animal models. The cuprizone (CPZ) model for the CNS de/remyelination has gained a renewed interest during the past decade. CPZ-induced demyelination is considered to be primarily an oligodendrocyte loss with participation of the inflammatory response. As the blood brain barrier remains intact, we found this model advantageous for studying GA effects on CNS remyelination with minimum influence of the peripheral immune cellular component. Our results show that GA, given one week before the CPZ treatment, had a maturational effect functional to remyelination. However, myelin was unorganized as compared to controls. When GA was concomitantly injected with CPZ, oligodendroglial precursor proliferation diminished in favour of maturation and myelin recovered an organized disposition. GA-treated animals also show microglial cell (MG) activation. In vitro assays demonstrated that GA-primed MG cultures had a significant increase in IL-10 and IL-4 secretion. GA-challenged MG-conditioned media induced oligodendrocyte proliferation and subsequent differentiation. Our results suggest that, in addition to its well-recognized immunoregulatory properties, GA also has an effect on resident immuno-response, which leads mature oligodendrocytes towards CPZ-induced demyelination repair. 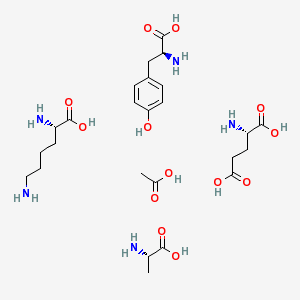 Mixture of Amino acids in Glaterimer Acetate
Yesterday we took some stick for asking what doesn’t glaterimer acetate (GA) do? OK that was a bit tounge in cheek, but the reality is that the mechanism of immunomodulation attributed to GA has been very varied throughout the years.


I suppose as it is doing something positive in MS who cares?


Well if you want to improve the effectiveness this would help. Some people think that a different mixture of amino acids is better, others scratch their heads.

I am interested to see that in this new study it is claimed that GA helps promote remyelination. I think this is yet more evidence for saying that mechanism of action could be varied.


You suggested some explanations……I wonder how the remyelination would be due to cross linking Ig and causing TRegitopes?

Cuprizone is a copper containing substance that is toxic to oligodendrocytes in certain bits of the brain, when added to the diet of rodents. Once removed then remyelination occurs. This may be speeded up by addition of chemicals that promote remyelination. This study suggests that copaxone can do this. The suggestion is that coxpaxone stimulates microglia to produce growth factors that stimulate oligodendrocytes to mature. Does this occur in humans? It would be good if it does. Does glaterimer acetate get into the brain? If if does not would this be important? If it does could it be important?


This study on remyelination repeats something done in a different remyelinating model some time ago,it is suggested to have other functions in neurodegenerative diseases too.


It is hard to get you head round it…….not to say that you can’t..and importantly we do not know how many drugs really work.