“This study looks at the effect of heat stress on the function of central nerves in MSers, compared to controls. No surprises regarding the headline results; heat stress affects the function of MSers more than it does healthy controls. The main reason for this is that demyelinated and/or remyelinated nerves malfunction when exposed to temperatures above normal. Heat sensitivity is a common problem in MSers. We have previously posted on this and have done surveys in the past highlighting this issue. This is why there have been studies on cooling suits in the past and why so many MSers find cooler environments more bearable. What is your experience?” 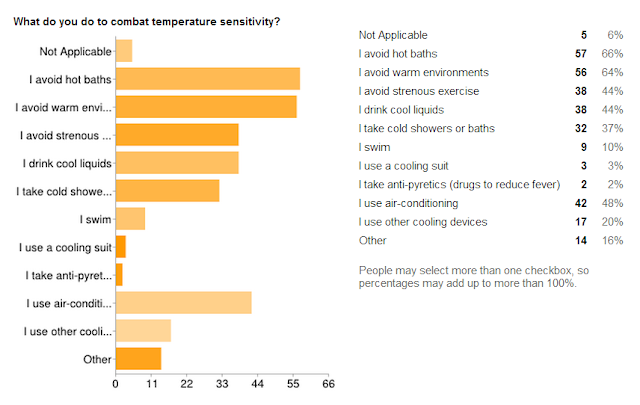 Objective: The purpose of this investigation was to test the hypothesis that passive heat exposure in MSers will produce increased subjective fatigue and impairments in physiologic measures of central conduction and cortical excitability compared to healthy individuals.

Results: Central motor conduction time (CMCT) was significantly shorter during HS in controls; however, in MS patients normal increases in conduction velocity with increased temperature were not observed centrally. MSers also exhibited decreased cortical excitability during HS, evidenced by significant increases in resting motor threshold, decreased MEP amplitude, and decreased recruitment curve slope. Both groups exhibited post-exercise depression of MEP amplitude, but the magnitude of these decrements was amplified in MSers during HS.

Conclusions: Taken together, these results suggest that CNS pathology in MSers played a substantial role in reducing cortical excitability during HS.

Other posts of interest: