Reprogramming somatic cells into pluripotent embryonic stem cells (ESCs) by somatic cell nuclear transfer (SCNT) has been envisioned as an approach for generating patient-matched nuclear transfer (NT)-ESCs for studies of disease mechanisms and for developing specific therapies. Past attempts to produce human NT-ESCs have failed secondary to early embryonic arrest of SCNT embryos. Here, we identified premature exit from meiosis in human oocytes and suboptimal activation as key factors that are responsible for these outcomes. Optimized SCNT approaches designed to circumvent these limitations allowed derivation of human NT-ESCs. When applied to premium quality human oocytes, NT-ESC lines were derived from as few as two oocytes. NT-ESCs displayed normal diploid karyotypes and inherited their nuclear genome exclusively from parental somatic cells. Gene expression and differentiation profiles in human NT-ESCs were similar to embryo-derived ESCs, suggesting efficient reprogramming of somatic cells to a pluripotent state. 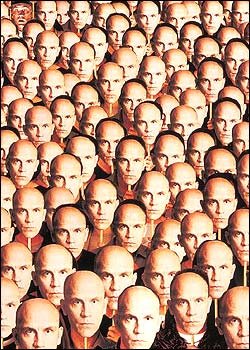 Dolly the Sheep was the first cloned animal made by nuclear transfer. They removed the DNA from any old cell and took an egg (oocyte) and replaced the genetic material with the genetic material from a non sex cell. This study shows that you can now clone humans by the same technique. Is this Brave New World?

This means you do not need embryos to make stem cells, but you do need eggs. But it now allows one to make identical matches to the recipient. Is this a step closer to making replacement parts or a step closer for some megalomaniac trying to recreate “Boys from Brazil” part II, so regulation will need to get its game up to par.

If stem cells are the answer then one giant leap for mankind……..?