BACKGROUND: The MRI incidental finding in asymptomatic subjects of brain white matter (WM) changes meeting the Barkhof criteria for the diagnosis of multiple sclerosis (MS) has been recently characterized as the radiologically isolated syndrome (RIS). This entity needs to be more specifically defined to allow risk stratification of these subjects. We used brain proton magnetic resonance spectroscopic imaging (1H-MRSI) to assess metabolic changes in an RIS population.
METHODS: Twenty-three RIS subjects who were classified according to the Okuda Criteria underwent 1H-MRSI examination with a central brain (CB) volume of interest (VOI) to measure levels of N-acetylaspartate (NAA) and choline (Cho) normalized to creatine (Cr) in the whole CB-VOI, in lesional/perilesional and normal-appearing WM regions, and in the cortical gray matter (CGM). The 1H-MRSI data were compared with those of 20 demographically matched healthy controls (HC).
RESULTS: NAA/Cr levels were significantly lower in RIS than in HC in all regions (p < 0.005 for all). No differences in Cho/Cr levels were found in either brain region. A single-subject analysis showed that NAA/Cr levels were at least 2 SDs below the HC mean in the 44% of RIS in the normal-appearing WM and in the 61% of RIS in the CGM.
CONCLUSION: Decreased brain NAA/Cr levels in a group of RIS subjects indicates that brain metabolic abnormalities suggestive of axonal damage can be significant even at this early disease stage. This information could be useful for stratifying RIS individuals with a high risk of progression to MS 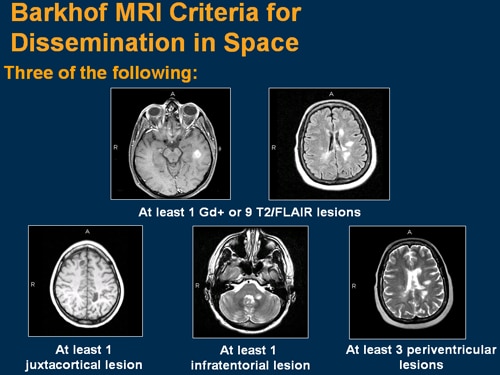 Radiologically isolated syndrome is when someone has a scan and lesions suggestive of MS are found before any clinical indication is found and by applying The Barkoff Criteria to use MRI in the aid of diagnosis of MS, at risk individuals can be found. This study at this early stage there is evidence of  nerve damage as assessed by loss of NAA. So the same as CIS and early MS there is nerve damage occurring from the get go, we need to get moving and treat early. The regulators and NICE need to wake up and give neuros tools to deal with this.