Cortical lesions constitute an important part of multiple sclerosis pathology. Although inflammation appears to play a role in their formation, the mechanisms leading to demyelination and neurodegeneration are poorly understood. We aimed to identify some of these mechanisms by combining gene expression studies with neuropathological analysis. In our study, we showed that the combination of inflammation, plaque-like primary demyelination and neurodegeneration in the cortex is specific for multiple sclerosis and is not seen in other chronic inflammatory diseases mediated by CD8-positive T cells (Rasmussen’s encephalitis), B cells (B cell lymphoma) or complex chronic inflammation (tuberculous meningitis, luetic meningitis or chronic purulent meningitis). In addition, we performed genome-wide microarray analysis comparing micro-dissected active cortical multiple sclerosis lesions with those of tuberculous meningitis (inflammatory control), Alzheimer’s disease (neurodegenerative control) and with cortices of age-matched controls. More than 80% of the identified multiple sclerosis-specific genes were related to T cell-mediated inflammation, microglia activation, oxidative injury, DNA damage and repair, remyelination and regenerative processes. Finally, we confirmed by immunohistochemistry that oxidative damage in cortical multiple sclerosis lesions is associated with oligodendrocyte and neuronal injury, the latter also affecting axons and dendrites. Our study provides new insights into the complex mechanisms of neurodegeneration and regeneration in the cortex of patients with multiple sclerosis. 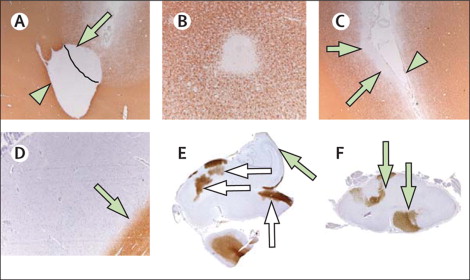 The question is what drives the cortical lesions on the edge of the brain is it the same here in the grey matter, just like the white matter. The suggestion here is that the processes are very similar. We know that grey matter lesions contain less cells than white matte lesion. But the fact that they find T cell and microglial activation cues still indicates an immune driven effect. I would think that others like the antibod-driven cause andothers may say viral infection and immune attack.