“The fact that Alemtuzumab does not stop brain atrophy is not surprising; all of us lose brain volume. Brain volume loss in MS is probably a delayed phenomenon from previous damage years earlier. The process by which nerve cells and their processes (axons) degenerate takes months to years to run its course. Therefore, it will be very interesting to see if Alemtuzumab normalises brain atrophy rates after 2 years? That will be the litmus test. If that is the case it will be protecting brain reserve and hopefully allow you to reach old age with sufficient brain to handle the cognitive stress of ageing and age-related brain disease, for example Alzheimer’s disease and small vessel disease. It is clear that these diseases present earlier in people with reduced brain reserve.”

“Let’s imagine for a moment that a treatment cures you of MS and prevents any further brain damage from MS. What will be the consequences of an early compared to a late MS cure? MSers, for arguments sake, who are cured very early in the course of their disease at a stage with little brain loss will present with Alzheimer’s disease later than MSers who are cured of MS later in the course of the disease. The latter hypothesis is based on the brain or cognitive reserve theory that is now well established in the dementia field.”

“The implications of this example is treat early with effective  therapies is to protect your brain so that you can maximise your chances of a good quality of life in old age.” 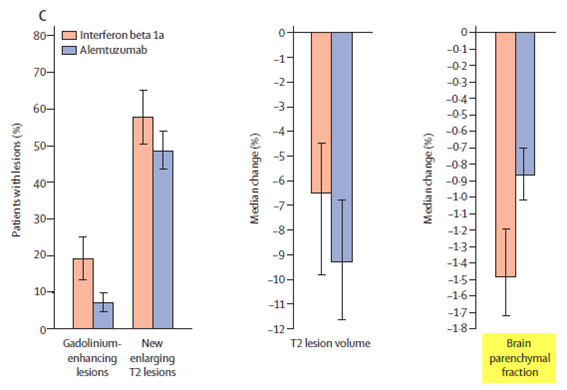 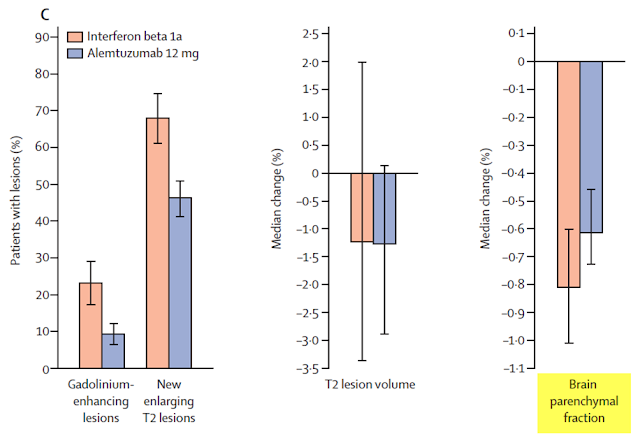 Background: The magnetization transfer ratio reflects the integrity of tissue structure, including myelination and axonal density.

BACKGROUND: To assess the long-term effect of the lymphocyte-depleting humanized monoclonal antibody Campath 1H on MR markers of disease activity and progression in secondary progressive MSers.


METHODS: Twenty-five MSers participated in a crossover treatment trial with monthly run-in MR scans for 3 months, followed (after a single pulse of Campath 1H) by monthly MR scans from months 1 to 6 and again from months 12 to 18. MR analysis was performed to provide measurements of the number and volume of gadolinium (Gd)-enhancing lesions as well as the hypointense lesion volume on a T1-weighted sequence. In addition, serial measurements of T2 brain lesion volume, brain volume, and spinal cord cross-sectional area were made over the duration of the study. The relationship between clinical and MR measures of disease evolution was also assessed.

CONCLUSION: Campath 1H treatment was associated with a sustained and marked reduction in the volume of Gd enhancement, indicating suppression of active inflammation. Nevertheless, many patients developed increasing brain and spinal cord atrophy, T1 hypointensity, and disability. This study highlights the potential role for novel MR techniques in monitoring the effect of treatment on the pathologic process in MS.