Déjà vu: MSologists are having the same problem as our colleagues in oncology with the price of DMTs. #MSBlog #MSResearch

…. A recent plea by oncologists condemning inflated prices for some cancer drugs has ignited a debate on this topic between clinicians and pharmaceutical companies and highlights the need for a broader assessment of drug valuation…..


…… In a recent commentary published in the journal Blood, an international group of more than 100 clinicians and scientists criticized pharmaceutical companies that market costly cancer drugs to treat chronic myeloid leukemia (CML). The authors argued that the prices of six CML drugs have reached unsustainable levels that jeopardize patients’ treatments and economic well-being…..

“I have heard similar mutterings from US colleagues.”

…..The article has sparked reactions that underscore the complexity of the issue, which encompasses questions of how drug values are determined, where moral boundaries are drawn and what mechanisms can be employed to reduce the divide between commercial interests and patient welfare…..

…. In response to this disparity, some regulatory agencies and insurance companies have refused to approve payment for certain high-cost treatments. In the UK, the National Institute for Health and Care Excellence (NICE) evaluates the cost-effectiveness of drugs that have been approved by the European Medicines Agency (EMA) and issues funding guidance to the National Health Service (NHS). The NHS covers the cost of drugs that NICE approves for a given disease…

….. In the US, medical insurance companies have also refused to reimburse patients for some cancer drugs….

….. Medical expenses are the most frequent cause of personal bankruptcy in the US, and the high cost of drugs is a factor in poor adherence and treatment failure…..

….. Ultimately, legislation that would allow healthcare agencies to negotiate directly with drug companies or that would cap drug prices might be needed to curtail further cost escalation of cancer treatments. Pharmaceutical companies realize that not everyone can pay for their drugs and have created patient assistance programs, some of them benefiting underdeveloped countries or underprivileged segments of the population….. 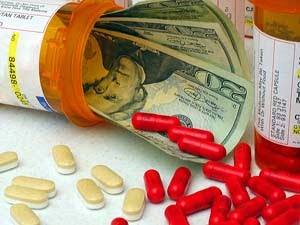 “The issue of expensive DMTs has been aired many times on this blog. It is interesting to see that it is not limited to our field. It is clear the status quo is unsustainable. What will be the outcome?”
Related posts on this blog:

Multiple Sclerosis Research: Drug Pricing: Pharma Cartels?
26 Sep 2012
If the price of getting closer to a cure for MS or an even more effective treatment regmine is high drug costs then so be it. If Pharma can’t make a hefty profit on MS drugs then they will stop developing them and that would be …

Rip-off prices for drugs set by ‘profiteering’ Big Pharma giants
30 Apr 2013
A group of more than 100 leading cancer physicians from around the world, including nine from the UK, accuse the drug industry of “profiteering” – making a profit by unethical methods such as by raising the cost of grain after …

Multiple Sclerosis Research: Is teriflunomide overpriced?
25 Sep 2012
“Not everyone pays the same price for drugs, of course, and rules that underlie various pricing levels in the US (Medicare, commercial, individual), added to negotiated rebates, patient assistance programs, and different rules …

The Truly Staggering Cost Of Inventing New Drugs – Multiple …
11 Feb 2012
Take these numbers and mousedoctor’s “drug the game” together and it explains drug pricing. Since it’s so difficult to get a new drug to market the only consideration is ‘How high can we price it?’ They charge whatever the …

Multiple Sclerosis Research: Average time-line for MS drug …
02 Nov 2011
The down side is that the era of cheap or affordable drugs is gone. Do you find this alarming?” Source: DiMasi et al. The price of innovation: new estimates of drug development costs. J Health Econ. 2003 Mar;22(2):151-85.