#MSResearch What is pathology
You were asking about pathology which is the “study of disease”. A pathologist is someone who studies disease and it is their job to find the cause of disease and death, so they hunt for cancers, infections etc. They normally take tissue and stain it with dyes to see different things. They may look for MS lesions.


A good pathologist sees the snapshots in the tissues and views it as points on a map that take you from one place to another as they use MSers brains to build pictures of what goes on. A bad pathologist looks in the mirror and sees themselves “saying you are great” and then eventually believe it.

Histological analysis (staining of bits of brains) from MSers can show that there is a problem with the oligodendrocyte. For example we can see the loss of myelin from nerves (demyelination) in MS and we can see that this has happened by looking down the microscope. We then have to guess how the damage occurred as we are only seeing snap-shots in time and often do not get the whole picture. This can lead to controversy and disagreement by MS pathologists (Docs who study disease).

We can get this right or wrong, but I will give you a a simple analogy, I know some of you don’t like these …….others do! So constructive comments only please.

However, if we imagine the spinal cord that can be viewed as a safe. If we open the safe-door we can see that in health it is full of cash (eg. myelinated), but following diease i.e the safe door is opened we can see that the safe is empty (demyelinated). We can see something is wrong and that something has happened, but we have to try and guess what happened using these snap shots. This is what pathologists do. 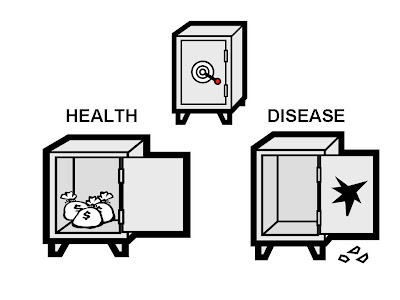 Maybe the reason the money has gone is because it has been taken by a bank robber, who’ll go to jail if caught. However, an alternative explanation is that there was a greedy banker who has taken the cash to invest and has made loads of profits from selling loans to people that can’t afford to repay the loan. Therefore, the bank has gone out of business and someone has been to empty the safe to take the cash to the administrators. At the same time the banker moves to another high-paid job with their cash when caught….go figure but that’s not a story for the blog 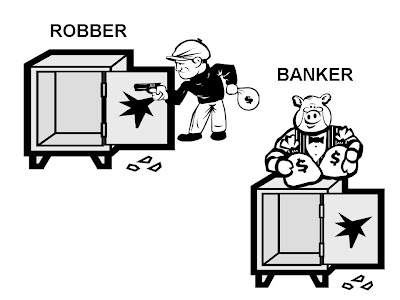 We know the safe is empty so why is important to know who emptied it? It is important because of the solution (treatment) that we need to stop the safe being emptied again in the future. If the cash has gone because of a robber we can deter this from happening by employing more police, using a flash new alarm system or identify and deal with the social reason that led to the person acquiring a thieving behaviour in the first place. However if it is a gambling banker that caused the money to go, the solution may be the (re)introduction of regulation, etc. Therefore if you get it wrong, your treatments don’t work.

One way to try and determine what is happening is to use other techniques to monitor the brain. As such magnetic resonance imaging has become very useful tool, because it can be done repeatedly in the living individual and it is very useful in the diagnosis of MS. The problem is that the things that MRI detects (movement of water molecules in magnet planes) are often not the same as any pathological outcome that we can see down a microscope. This is because they work in different ways and detect different things. Importanly the other problem is that the MRI does not have very high resolution like microscopes. So its abit like CCTV-you can see it’s a human but the resolution is so low you can’t really tell that it’s your next door neighbour. Many of my friends say that they often seen me on Tele……….Crime watch. It’s abit like you know that the problem is occuring in Brussels but the imaging shows you that the problem is occurring in all of western Europe. 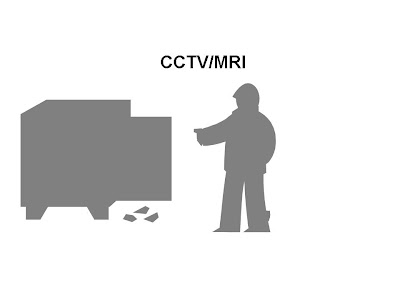 So is the image above detecting a robber or a banker?
Well if we had a device and the technology to monitor the living human brain at high resolution, as we do have for imaging technologies for some aspects of disease in mice, we could see that whilst a banker is there, it is really dangermouse who has taken all the money and we didn’ t even notice him (bottom of right leg) on the MRI above. He urinated on the lock of the safe and it rusted, so the banker left the safe unlocked and dangermouse then took the cash….Simples 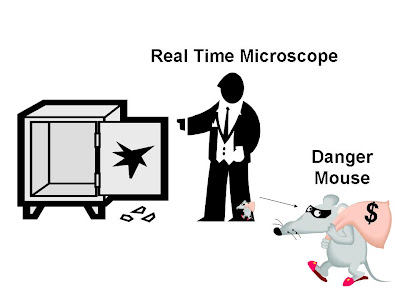 Now hopefully you can see that whilst people may be looking at tissue from MSers, it is possible that they don’t have the same view about what really is happening and hence some of the controversy.