How do we define benign MS? How to identify benign disease. #MSBlog #MSResearch

OBJECTIVE: To establish the characteristics of MSers following a benign course of MS and evaluate the importance of potential prognostic factors. Also, an assessment of the value of the Kurtzke EDSS as a prognostic indicator has been undertaken in MSers previously determined to have benign multiple sclerosis, after 10 years of follow up.


METHODS: A prevalence study in the Coleraine, Ballymena, Ballymoney, and Moyle districts of Northern Ireland used the Kurtzke expanded disability scale score (EDSS) in 259 MSers with MS. Of these, 181 had had MS for>/=10 years, 36 having benign disease (EDSS</=3.0) >/=10 years after onset. Clinical and demographic details of the various MSer groups, including the minimal record of disability, were compared. The 1987 study in Northern Ireland identified 33 MSers with benign multiple sclerosis. Twenty eight were available for follow up in 1996 along with 42 contemporary non-benign MSers.

RESULTS: MSers with benign multiple sclerosis were predominantly women (ratio 4.1:1 v 2.1:1) and younger at onset (25.8 v 31.2 years). Commonest symptoms at onset were sensory and optic neuritis (33.3% each). MSers with late onset (older than 40 years) were less likely to have a benign course, more likely to have a progressive course from onset, significantly more likely to have motor disturbance at presentation, and had a lesser female predominance. Optic neuritis was significantly more common in those with a younger age at onset. In the follow up study, MSers with benign MS continued to have a more favourable course than non-benign counterparts but progression of disability and to the secondary progressive phase remained significant. 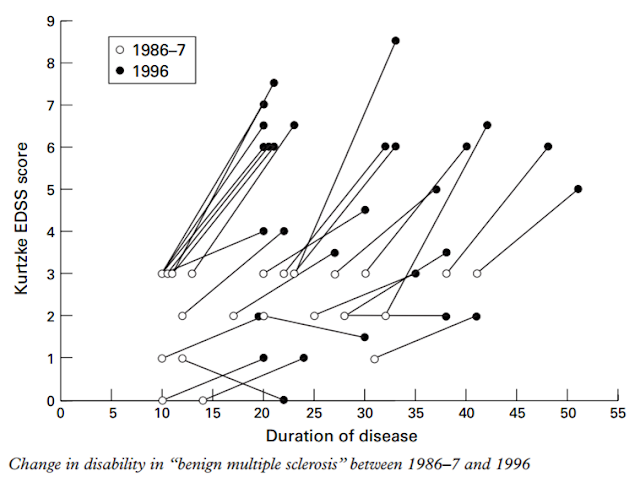 CONCLUSIONS: The association of female sex, early onset, and presentation with optic neuritis and sensory symptoms with a favourable course is confirmed. However, although the EDSS does provide a useful indicator of prognosis, the label “benign multiple sclerosis” is often temporary as apparently benign disease often becomes disabling.

In 2001, these investigators followed up all MSers from the 1991 Olmsted County Multiple Sclerosis (MS) prevalence cohort. They found that the longer the duration of MS and the lower the disability, the more likely a MSer is to remain stable and not progress. This is particularly powerful for MSers with benign MS with an Expanded Disability Status Scale score of 2 or lower for 10 years or longer who have a greater than 90% chance of remaining stable. This is important because these MSers represent 17% of the entire prevalence cohort. These data should assist in the shared therapeutic decision-making process of whether to start immunomodulatory medications. 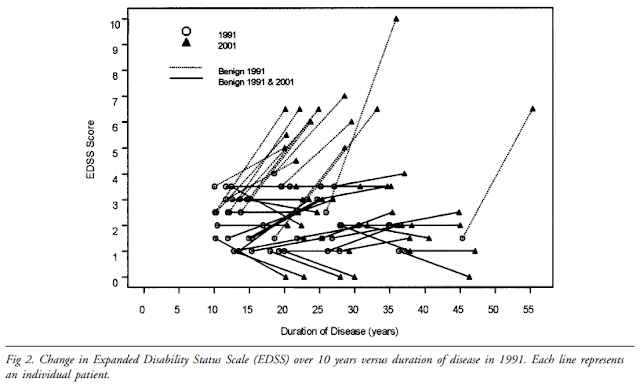 “These studies show that there are a proportion of MSers who stay stable; i.e. who turn out to have benign MS. However, what they don’t show is how difficult it is to make this call up front, that is early in the course of the disease. What is also not discussed is how disability is assessed in these MSers. We know that the EDSS is poor at catching hidden signs, for example depression, fatigue and cognitive impairment. Other studies show that ~50% MSers with benign MS as defined using the EDSS have significant cognitive impairment in at least 2 cognitive domains.”