Nikić I, Merkler D, Sorbara C, Brinkoetter M, Kreutzfeldt M, Bareyre FM, Brück W, Bishop D, Misgeld T, Kerschensteiner M. A reversible form of axon damage in experimental autoimmune encephalomyelitis and multiple sclerosis. Nat Med. 2011 Apr;17(4):495-9
In multiple sclerosis, a common inflammatory disease of the central nervous system, immune-mediated axon damage is responsible for permanent neurological deficits. How axon damage is initiated is not known. Here we use in vivo imaging to identify a previously undescribed variant of axon damage in a mouse model of multiple sclerosis. This process, termed ‘focal axonal degeneration’ (FAD), is characterized by sequential stages, beginning with focal swellings and progressing to axon fragmentation. Notably, most swollen axons persist unchanged for several days, and some recover spontaneously. Early stages of FAD can be observed in axons with intact myelin sheaths. Thus, contrary to the classical view, demyelination-a hallmark of multiple sclerosis-is not a prerequisite for axon damage. Instead, focal intra-axonal mitochondrial pathology is the earliest ultrastructural sign of damage, and it precedes changes in axon morphology. Molecular imaging and pharmacological experiments show that macrophage-derived reactive oxygen and nitrogen species (ROS and RNS) can trigger mitochondrial pathology and initiate FAD. Indeed, neutralization of ROS and RNS rescues axons that have already entered the degenerative process. Finally, axonal changes consistent with FAD can be detected in acute human multiple sclerosis lesions. In summary, our data suggest that inflammatory axon damage might be spontaneously reversible and thus a potential target for therapy. 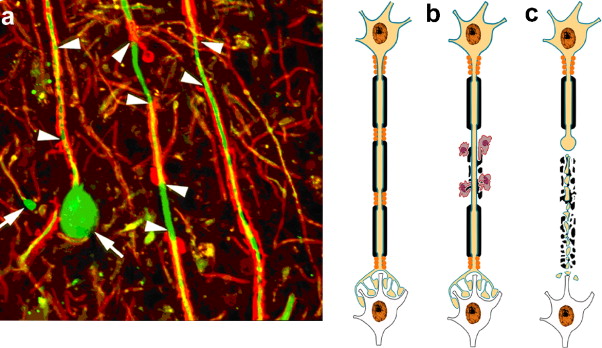 In the the other post they counted axon swellings as a marker of damage, this study suggests that some of the swollen axons will break up and die but some are not destined to die and recover. We know this happens in MS. Using magnetic resonance spectroscopy in MS, it was found that N acetyl aspartate (NAA) disappears. This was found to be concentrated in nerves and it was thought that it was a measure of nerve loss which it is, but in some cases the loss of NAA was reversible, so it it has similarities with the mice. In this study they found that the mitochondria, which are the power houses of nerves are affected early. If a nerve looses its energy supply then it is vulnerable to damage, but there is a window of opportunity to stop this energy loss and if you do then the nerves may not die, this can be done with anti-inflammatories that are active in the brain These can target reactive oxygen species (Hydrogen peroxide) or target the cells that make them.

This is the target for some of the therapies currently in trial for progressive MS, we can think of more