In the adult central nervous system (CNS), tissue-specific germinal niches, such as the subventricular zone of the lateral ventricles and the subgranular zone of the dentate gyrus of the hippocampus, contain multipotent neural precursor cells (NPCs) with the capacity to self-renew and differentiate into functional brain cells (i.e. neurons, astrocytes or oligodendrocytes). Due to their intrinsic plasticity, NPCs can be considered an essential part of the cellular mechanism(s) by which the CNS tries to repair itself after an injury. In inflammatory CNS disorders, such as multiple sclerosis (MS), neurogenesis and gliogenesis occur as part of an ‘intrinsic’ self-repair process. However, full and long-lasting repair in progressive MS is not achieved.

Recent data suggest that endogenous NPCs, while trying to repair the damaged CNS in MS, may become the target of the disease itself. It is possible that factors produced during MS, like CNS-infiltrating blood-borne inflammatory mononuclear cells, reactive CNS-resident cells, and humoral mediators, can alter the physiological properties of NPCs, ultimately impairing their ability to promote neural regeneration. Here, we investigate the effect of cerebrospinal fluid derived from primary progressive (PPMS) and secondary progressive (SPMS) MS patients (CSF-MS) on the survival, proliferation, and differentiation of commercially available human embryonic-derived NPCs named ENStem-A. We found that PPMS derived CSF markedly reduced the proliferation of ENStem-A (Stem cell line) and increased their differentiation toward neuronal and oligodendroglial cells, compared to control CSF. Similar but less striking results were seen when ENstem-A were treated with SPMS derived CSF. Our findings suggest that in both SPMS and PPMS the CNS milieu, as determined by extrapolation from CSF findings, may stimulate the endogenous pool of NPCs to differentiate into neurons and oligodendrocytes. 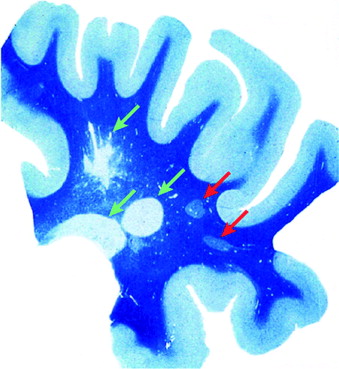 Inflammation is about getting rid of infection and then repairing the damage. There seems to be a problem in MS that the nerve tissue is treated like an infection. There is repair in MS (red arrows in picture above) this can be seen histologically and recovery of function and there are soluble factors that promote this repair, we have named quit a few. This study shows that there are repair factors produced in progressive MSers