Do you suffer from tremor? A new drug to try for cerebellar tremor. #MSBlog #MSResearch #ClinicSpeak

“Tremor, in my opinion is one of the most disabling symptoms in MS. When it involves the pathways to and from  the cerebellum it is called a cerebellar tremor.”

“Are there any anatomists out there? The following is for you. A particular type of cerebellar tremor is one that affects the nerve fibres that leave the cerebellum in the so called superior cerebellar peduncles and pass through the midbrain to the thalamus. This tremor has been called a rubral, or red, tremor in the past as the fibres pass through and adjacent to red nucleus in the midbrain. The term we use to describe this tremor now is a cerebellar outflow tremor.” 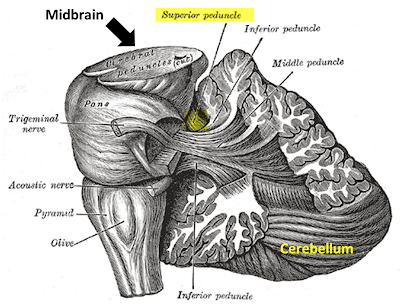 “A cerebellar outflow tremor causes wild flapping movements that prevents you doing any fine motor tasks, for example doing up your buttons and bra clips, or using a pen. Even using a knife and a fork becomes difficult. The occupational therapists are able to give you eating utensils with big handles that may help. Drinking is a problem and this has to be done using a baby cup with a spout or a sealed container with a straw. Getting the spout and straw into your mouth can be difficult. Associated with this tremor is a slurred speech called a dysarthria and shaking or bobbing of the head; this is called titubation. Most MSers who have this type of tremor have unsteadiness of gait called ataxia and are at risk of frequent falls. They may also complain of oscillopsia, which is when your vision bobs up and down due to brain being unable to fix your eyes on a target.”

“The following is a video giving you an example of a cerebellar tremor. This person does not have MS, but shows a very mild tremor on the left side that can be compared to the right side that is normal.”

“Treating cerebellar tremor is very difficult; medications that we try seldom work and are typically very sedating. Therefore this study below is significant and provides me with another potential drug to try in clinic; levetiracetam. I have not previously tried levetiracetam for cerebellar tremor. Other drugs I use are a combination of baclofen and gabapentin (very sedating), clonazepam (extremely sedating), propranolol (may reduce the amplitude but does not help the intention component), mirtazapine (I am unimpressed with this drug’s efficacy), isoniazid (I stopped using this more than a decade ago), etc.”

“Diving or sports weights worn at the wrist helps reduce the amplitude of the tremor so that it become less flapping, but this does little to improve the intention component of the tremor, i.e. when you get close to the target the tremor gets worse. If all else fails I refer some MSers to my neurosurgical colleagues for an opinion about having a neurostimulator inserted into a small area of the brain to block the tremor. This only works if the movements that control fine coordination remain intact under the tremor. To assess the latter I grab the arm and hold it so that it is not bobbing up and down from the flapping component of the tremor and I then ask the MSers to do rapid alternating movements of the hand, for example touching the thumb on each finger in turn and repeating the cycle. If this can be done quickly and accurately then a surgical opinion is warranted. Functional neurosurgery works well for a time (3-5 years), but in my experience the tremor usually returns. Why? This type of tremor is typical of progressive MS and as MS progresses the tremor re-emerges. Is it worthwhile having surgery then? Yes having another 3-5 years with good upper limb function can improve your quality of life and allow you to things you want to do. For example, changing your babies nappies or diapers. In 3-5 years time you won’t need to do this. And who knows what will happen in the future? What if a DMT emerges for SPMS and PPMS and these can extend the window to 10 years?”

“I have a policy of spreading the hope. There is always something we can try, and do, for MSers with symptomatic problems. I don’t believe in saying there is nothing I can do for you. Making sure MSers with disabilities have hope is very important; remove hope and you destroy their joie de vivre.”

BACKGROUND: One of the most disabling MS symptoms is tremor which can cause severe disability and handicap. Treatment of tremor in MSers is still very challenging to manage. In this study, they sought to determine the efficacy of Levetiracetam on treatment of MS-related tremor. Levetiracetam is an anti-convulsant that is used to treat epilepsy.

MATERIALS AND METHODS: This clinical trial study was conducted among 22 MSers from July 2012 to April 2012 in Alzahra-Hospital, Isfahan, Iran. Patients were given 500 mg Levetiracetam twice a day for 1 week. The drug dosage increased 1000 mg per week until reaching the peak dose of 50 mg/kg. After a 2 week period of washout, first phase was repeated. The subjects were assessed at baseline, after first intervention, after wash-out period, and after second intervention.

RESULTS: A total of 20 MSers(17 females and 3 males) were enrolled in our study. There was a significant difference among tremor rate before and after intervention (P = 0.001). The drug was well tolerated and without any serious side effect during follow-up.

CONCLUSION: Our findings suggest that although Levetiracetam caused a decrease tremor rate in MS, which surged again after washout period.

Other posts on tremor: