August 2013 PML update:  How many MSers have died from PML? #MSBlog #MSResearch


“The following are the latest risk figures for PML as a result of being treated with natalizumab. Please note that the slideshow at the bottom is for professional eyes only.”


“As of 2nd July 2013 there have been 395 cases of natalizumab-associated PML; 92 (23%) MSers have died from PML and 303 (77%) are alive. Please note that the majority of those surviving have a poor functional outcome. Alarming as these figures sound you need to keep them in context; firstly, over 118,000 MSers have been treated with natalizumab, and secondly, these risks and the numbers of MSers developing PML are falling due to the successful risk mitigation strategy that has been implemented with JC virus testing. Slide 13 is the most important slide regarding risks based on the three identified PML risk factors:
In addition to this is appears that titres or levels of anti-JCV antibodies also play a role in risk (see below) and will need to be incorporated into future risk models.”

Objectives: In MSers treated with natalizumab, the presence of anti-JCV antibodies (JCV Ab+), prior use of immunosuppressants (IS), and increased duration of natalizumab treatment, especially greater than 2 years, are known risk factors for progressive multifocal leukoencephalopathy (PML). With polyomaviruses, higher levels of antibodies have been correlated with increased viral burden and increased disease risk. It is not known whether JCV Ab levels correlate with PML risk in natalizumab-treated MSers. The objective of this analysis is to examine the association between JCV Ab index (JCV antibody level as measured using the STRATIFY JCV DX Select assay) and PML risk in natalizumab-treated MSers.

Methods: Analyses involved JCV Ab index data from JCV Ab+ MSers enrolled in clinical studies or clinical practice. A cross-sectional analysis of JCV Ab index data from MSers without PML was first performed to assess potential relationships between JCV Ab index and known risk factors (natalizumab treatment duration <=24 vs >24 monthly infusions and prior IS use). P values were calculated using a Wilcoxon rank sum test. The association between JCV Ab index and PML was then assessed using all available longitudinal data. Odds ratios (ORs) were estimated from generalised estimating equations with a logit link. The predicted probabilities were then used to update the current PML risk estimates for JCV Ab+ MSers with high/low Ab index by applying Bayes theorem.

Conclusion: Risk of PML in JCV Ab negative natalizumab-treated MSers is very low (0.07 per 1000). In JCV Ab+ MSers who have low JCV Ab index, the risk of PML is several-fold lower than the risk currently attributed to all JCV Ab+ MSers. Utilisation of JCV Ab index allows for further clinically meaningful stratification of PML risk in JCV Ab+ natalizumab-treated MSers. 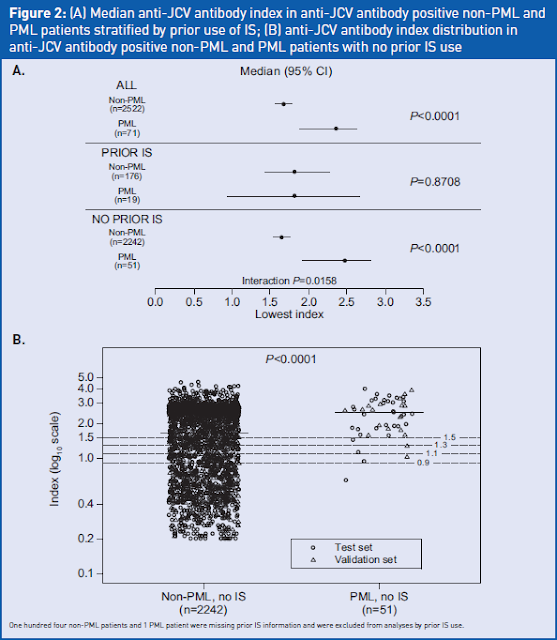 “The figures in the bottom table are derived from Table 2 above and present the data in a different way, rather as per thousand an absolute risk. You have to realise that these figures are derived from relatively small numbers, i.e. 51 cases of PML. But the data is what it is and will not be confirmed by anyone else. I assume as more cases emerge the data set will be updated. The implications of this data is that many MSers who are doing well on natalizumab and have low titres, or a low index, may choose to stay on natalizumab rather than switch.”