Bsibsi M, Holtman IR, Gerritsen WH, Eggen BJ, Boddeke E, van der Valk P, van Noort JM, Amor S.Alpha-B-Crystallin Induces an Immune-Regulatory and Anti-viral Microglial Response in PreactiveMultiple Sclerosis Lesions. J Neuropathol Exp Neurol. 2013 Sep 13. [Epub ahead of print]Microglial nodules are frequently observed in the normal-appearing white matter of multiple sclerosis (MS) patients. Previously, we have shown that these clusters, which we call “preactive MS lesions,” are closely associated with stressed oligodendrocytes and myelin sheaths that contain markedly elevated levels of the small stress protein alpha-B-crystallin (HspB5). Here, we show that microglia in these lesions express the recently identified receptors for HspB5, that is, CD14, Toll-like receptor family 1 and 2 (TLR1 and TLR2), and several molecular markers of the microglial response to HspB5. These markers were identified by genome-wide transcript profiling of 12 primary human microglial cultures at 2 time points after exposure to HspB5. These data indicate that HspB5 activates production by microglia of an array of chemokines, immune-regulatory mediators, and a striking number of anti-viral genes that are generally inducible by type I interferons. Together, our data suggest that preactive MS lesions are at least in part driven by HspB5 derived from stressed oligodendrocytes and may reflect a local attempt to restore tissue homeostasis. 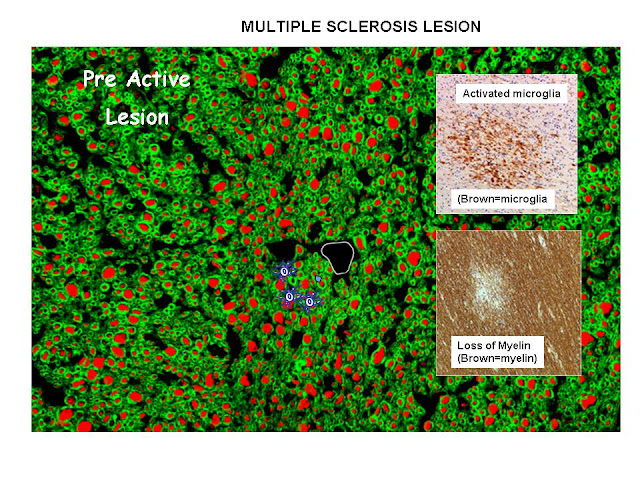 Oligos express a stress marker and microglia get called-in and they produce factors that pull in  other cells (chemokines) and anti-viral molecules.Is this because the oligos are infected with a virus and is this the start of the MS lesion?


It is thought that there are too many pre-active lesions so some of them may resolve.