Have we got the autoimmune paradigm of MS wrong? #MSBlog #MSResearch

“I was involved in a heated discussion yesterday at a meeting in Germany that centred on the current, and future, DMT market for MS. The opinion was that it would expand and continue to support several new drugs and classes of drugs, for example safer and more effective immune modulators and neuroprotective, remyelination & neurorestorative therapies. What do you think?”

“This current perspective is based on the premise that we have got the cause of MS and its pathogenesis right. What if we are wrong and MS is due to a viral infection? I have made the argument for a paradigm shift on this issue on many occasions.” 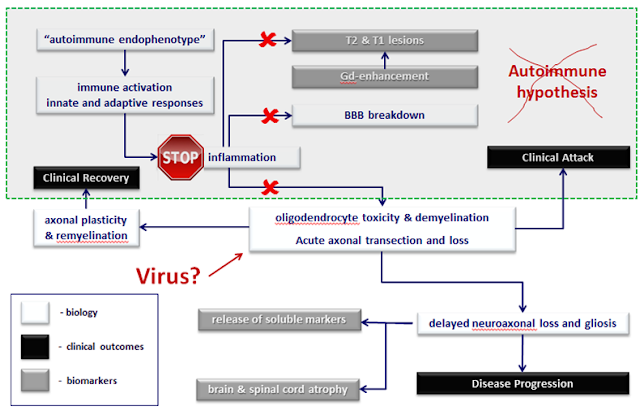 “This figure which attempts to illustrate the current dogma, in relation to the pathogenesis of MS, may be incorrect. In other words the inflammatory, or so called autoimmune reaction, is secondary, possibly in response to another trigger. An obvious hypothesis is that MS is due a virus. This would imply that therapeutic strategies targeting primarily inflammation (shaded box), which reduce or abolish relapses and focal MRI activity, may have little impact on the underlying neurodegenerative processes that drive progressive MS (lower half of figure). If this was the case relapsing MS would simply be converted to non-relapsing progressive MS. This experiment is underway; MSers with active disease rendered relapse-free with more active DMTs are being followed to see if they present in 10, 15, or possibly 20, years’ time with secondary progressive MS. Should we wait for this experiment to read-out before pursuing other hypotheses? Of course not, people with MS cannot wait this long for an answer. This is why we promote active early treatment under the autoimmune umbrella and have simultaneously launched the Charcot Project and are doing an exploratory a trial of raltegravir, an HIV drug, in MS. We also are continuing to try and drum up support for doing a trial of an anti-EBV drug in MS.”

“Interestingly, drugs that target B cells, in particular B cell depleting drugs such as anti-CD20 (rituximab, ocrelizumab, ofatumumab) monoclonal antibodies also target EBV and are very effective in MS. Anti-CD19 which also targets B cells will do the same as anti-CD20; hopefully anti-CD19 will be even more effective than anti-CD20 as it targets plasmablasts as well.”

“If the viral hypothesis turns out to be correct this could potentially destroy the current DMT market and replace it with something new. Events, or paradigm shifts, of this nature happen more frequently than expected. A good book to read about these improbable events is ‘The Black Swan: The Impact of the Highly Improbable’ by Nassim Taleb. The book focuses on the extreme impact of certain kinds of rare and unpredictable events (outliers) and humans’ tendency to find simplistic explanations for these events retrospectively. This theory has become known as the black swan theory.” “Is a black swan event about to happen in the field of MS? Watch this space.”

Other posts of interest:

Multiple Sclerosis Research: Targeting B cells
12 Aug 2013
Another target is CD19, which to me is even more appealing than CD20 as it is expressed on a larger number of cells including plasmablasts. At present we are recruiting RRMSers for a trial of MEDI-551, which is an antibody …
http://multiple-sclerosis-research.blogspot.com/