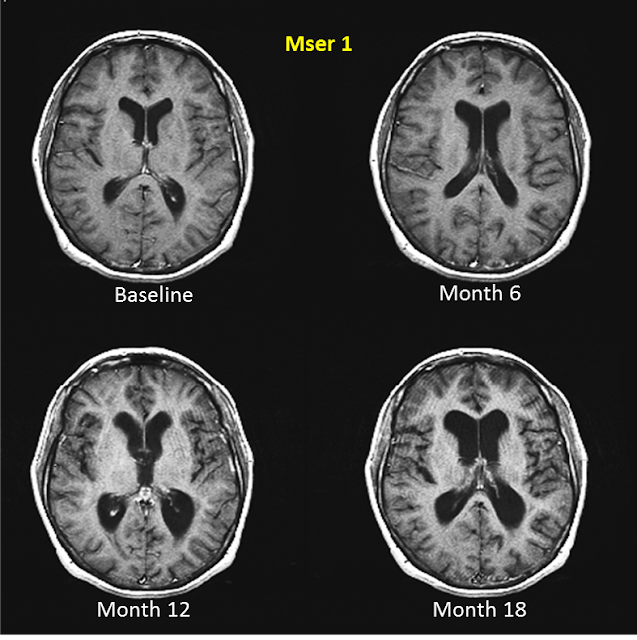 
Background: Grey matter (GM) atrophy occurs early in primary-progressive MS (PPMS), but it is unknown whether its progression involves different brain regions at different rates, as is seen in other neurodegenerative diseases.

Objective: Our colleagues at UCL investigate the temporal and regional evolution of GM volume loss over 5 years and its relationship with disability progression in early PPMS.

Methods: They studied 36 PPMSers within five years from onset and 19 age and gender-matched healthy controls with clinical and imaging assessments at study entry and yearly for 3 years and then at 5 years. PPMSers were scored on the Expanded Disability Status Scale (EDSS) and MS Functional Composite (MSFC) at each time-point. An unbiased longitudinal voxel-based morphometry approach, based on high-dimensional spatial alignment within-subject, was applied to the serial imaging data. The rate of local (voxel-wise) volume change per year was compared between groups and its relationship with clinical outcomes was assessed.

Results: PPMSers deteriorated significantly during the five years follow-up. PPMSers showed a greater decline of GM volume (p<0.05, FWE-corrected) bilaterally in the cingulate cortex, thalamus, putamen, precentral gyrus, insula and cerebellum when compared to healthy controls over five years, although the rate of volume loss varied across the brain, and was the fastest in the cingulate cortex. Significant (p<0.05, FWE-corrected) volume loss was detected in the left insula, left precuneus, and right cingulate cortex in MSers at three years, as compared to baseline, whilst the bilateral putamen and the left superior temporal gyrus showed volume loss at five years. In PPMSers, there was a relationship between a higher rate of volume loss in the bilateral cingulate cortex and greater clinical disability, as measured by the MSFC, at five years (Pearson’s r=0.49, p=0.003). Longitudinal VBM demonstrated that the progression of GM atrophy in PPMS occurs at different rates in different regions across the brain.

Conclusion: The involvement of the cingulate cortex occurs early in the disease course, continues at a steady rate throughout the follow-up period and is associated with patient outcome. These findings provide new insights into the characteristics of GM atrophy across the brain in MS, and have potential consequences for the selection of brain atrophy as an outcome measure in neuroprotective clinical trials.