Gur-Wahnon D, Mizrachi T, Maaravi-Pinto FY, Lourbopoulos A, Grigoriadis N, Higazi AA, Brenner T.The plasminogen activator system: involvement in central nervous system inflammation and a potential site for therapeutic intervention. J Neuroinflammation. 2013 Oct 11;10(1):124. [Epub ahead of print].
BACKGROUND:Extracellular proteases such as plasminogen activators (PAs) and matrix metalloproteinases modulate cell-cell and cell-matrix interactions. Components of the PA/plasmin system have been shown to be increased in areas of inflammation, and have been suggested to play a role in inflammatory neurologic disorders such as epilepsy, stroke, brain trauma, Alzheimer’s’ disease and multiple sclerosis (MS). In the present study, we evaluated the involvement of the PA system in the animal model of MS, experimental autoimmune encephalomyelitis (EAE).

RESULTS:EAE was aggravated in uPA-/- and uPAR-/- mice, and this was accompanied by more severe histopathologic features and microglial activation. By contrast, specific T- cell reactivity towards the encephalitogenic antigen MOG was markedly reduced in the KO animals, as shown by a marked reduction in proliferation and pro-inflammatory cytokine secretion in these mice. Antigen presentation was also reduced in all the KO animals, raising an immunologic paradox. When the mice were treated with PAI-1, a peptide derived from the PA system, a marked and significant improvement in EAE was seen. The clinical improvement was linked to reduced T-cell reactivity, further emphasizing the importance of the PA system in immunomodulation during neuroinflammation.
CONCLUSIONS:Cumulatively, our results suggest a role for uPA and uPAR in EAE pathogenesis, as exacerbation of disease was seen in their absence. Furthermore, the successful amelioration of EAE by PAI-1 treatment suggests that the PA system can be considered a potential site for therapeutic intervention in the treatment of neuroimmune diseases.

Whilst I will not dwell on the content save to say it shows another avenue to treat EAE by targeting the blood clotting system,


However it is good to see that our earlier work published in two papers has been replicated.

Whilst we may not be the first to publish stuff, we aim to produce a quality of work that others can reproduce…it is a shame that so many other EAE studies turn out to be non-reproducible guff.


Part of the problem is the lack of quality control to the experiments.


Therefore it is appropriate that this week we have a publication in the Economist….It is very wasteful to have unreproducible stuff but be warned the Academic Literature is full of it.


Trouble in the Lab (Read the article)


The idea that the same experiments always get the same results, no matter who performs them, is one of the cornerstones of science’s claim to objective truth. If a systematic campaign of replication does not lead to the same results, then either the original research is flawed (as the replicators claim) or the replications are (as many of the original researchers on priming contend). Either way, something is awry.


A few years ago scientists at Amgen, an American drug company, tried to replicate 53 studies that they considered landmarks in the basic science, often co-operating closely with the original researchers to ensure that their experimental technique matched the one used first time round, they were able to reproduce the original results in just six.


Academic scientists readily acknowledge that they often get things wrong. But they also hold fast to the idea that these errors get corrected over time as other scientists try to take the work further. Evidence that many more dodgy results are published than are subsequently corrected or withdrawn calls that much-vaunted capacity for self-correction into question. 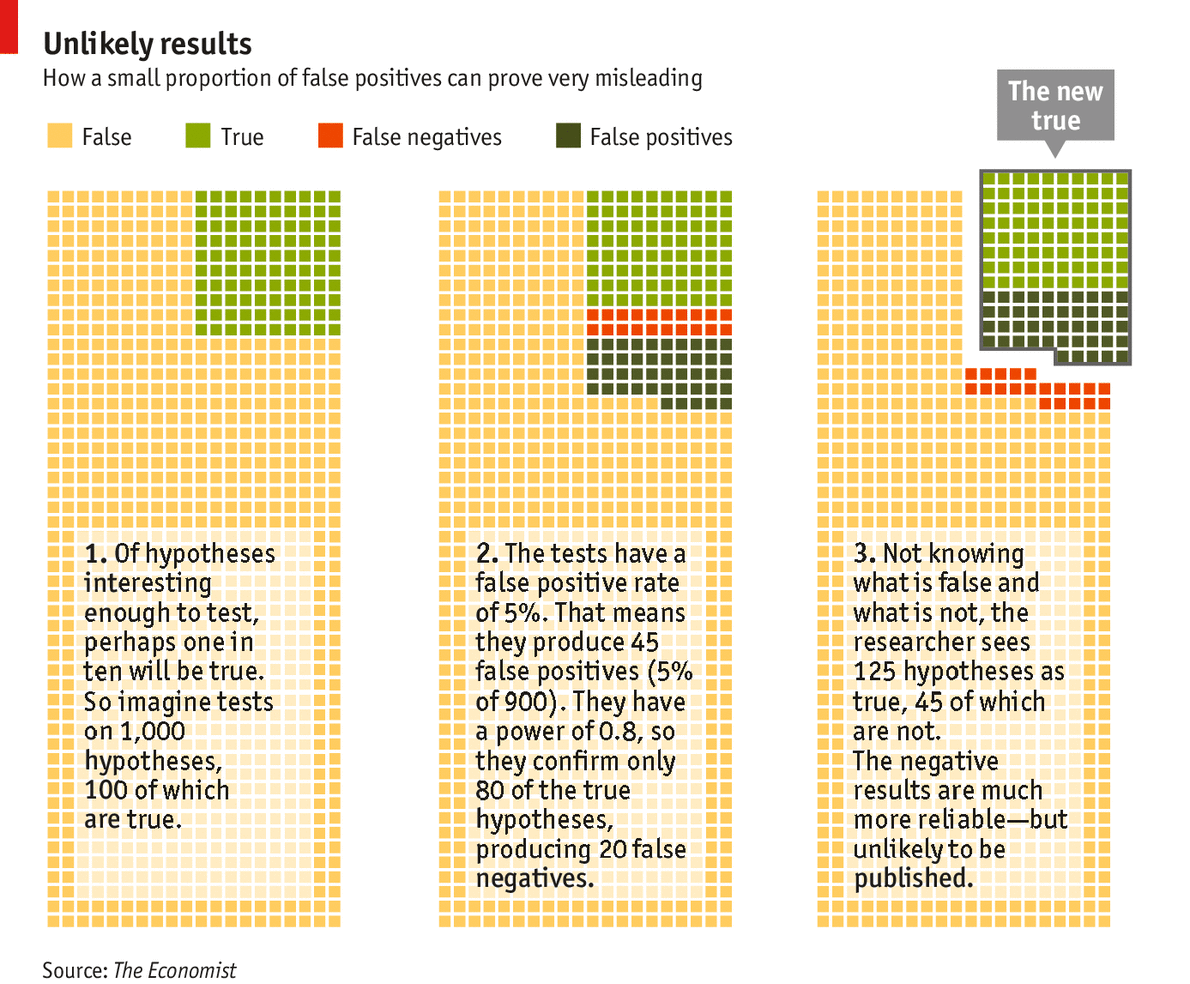 Scientists like to think of science as self-correcting. To an alarming degree, it is not.

This article19th October in the Economist is well worth reading

Data-fracking is the fracturing of a dataset by the application of a pressurized search through as many datapoints as is necessary to find one that has the appearance of being positive. Typically, data is combined with cortisol (stress) and caffeine (coffee), and the mixture is injected at high pressure into statistical analyses to illuminate illusory correlations along which the appearance of success may migrate to a press release. The products of data-fracking tend to be more gaseous than substantive :-).