High vitamin D levels have been associated with a decreased risk of developing multiple sclerosis (MS). The most important source of dietary vitamin D is fatty fish.
OBJECTIVE:The objective of this paper is to investigate the association between fish consumption and the risk of MS, including the interaction between fish intake and ultraviolet radiation (UVR) exposure habits.
METHODS:This study is based on the project Epidemiological Investigation of MS (EIMS), which is a Swedish population-based case-control study. The analysis included 1879 incident cases of MS and 4135 controls. Subjects who reported high fatty fish intake were compared regarding occurrence of MS with those who reported low intake by calculating odds ratio (OR) with 95% confidence interval (CI).
RESULTS:Frequent fatty fish intake was associated with decreased occurrence of MS (adjusted OR 0.82 (95% CI 0.68-0.98). There was no significant association between intake of lean fish and MS.
CONCLUSION: Fatty fish intake might decrease the risk for MS. A hypothetical explanation is that intake of fatty fish may compensate for vitamin D deficiency that is associated with increased MS risk. 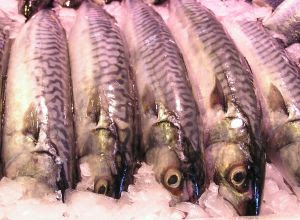 So a Fatty fish diet may make a small reduction (20% less likely) in the risk of developing of MS. So again a small effect but every bit could help.