Multiple sclerosis is an immune-mediated, demyelinating and neurodegenerative disease that currently lacks any neuroprotective treatments. Innovative neuroprotective trial designs are required to hasten the translational process of drug development. An ideal target to monitor the efficacy of strategies aimed at treating multiple sclerosis is the visual system, which is the most accessible part of the human central nervous system. A novel C57BL/6 mouse line was generated that expressed transgenes for a myelin oligodendrocyte glycoprotein-specific T cell receptor and a retinal ganglion cell restricted-Thy1 promoter-controlled cyan fluorescent protein. This model develops spontaneous or induced optic neuritis, in the absence of paralytic disease normally associated with most rodent autoimmune models of multiple sclerosis. Demyelination and neurodegeneration could be monitored longitudinally in the living animal using electrophysiology, visual sensitivity, confocal scanning laser ophthalmoscopy and optical coherence tomography all of which are relevant to human trials. This model offers many advantages, from a 3Rs, economic and scientific perspective, over classical experimental autoimmune encephalomyelitis models that are associated with substantial suffering of animals. Optic neuritis in this model led to inflammatory damage of axons in the optic nerve and subsequent loss of retinal ganglion cells in the retina. This was inhibited by the systemic administration of a sodium channel blocker (oxcarbazepine) or intraocular treatment with siRNA targeting caspase-2. These novel approaches have relevance to the future treatment of neurodegeneration of MS, which has so far evaded treatment. 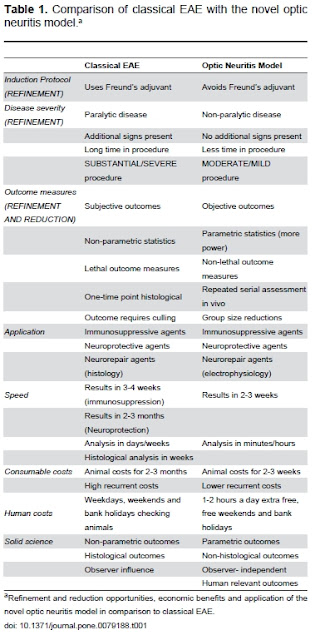 Experimental autoimmune encephalomyelitis model of MS is quite unpleasant to say the least. Procedures that neurologically affect animals are considered “severe/substantial” and this mean that an extra-special eye is cast over the use of such procedures. The Royal Society of Protection of Cruelty to Animals has held meetings and written articles this year with the view of eliminating EAE.

Research Animals have been protected in Law for over a century within the UK and is currently regulated by the current Animals (Scientific Procedures) Acts of 1986.

This means the welfare and environment in which animals live is tightly controlled and the Institution must hold a UK government licence to house research animals. The Study much have a UK government Project licence that is obtained following review by an ethics committee and a UK Government Official/Inspector. When there the procedures are severe then usually at least two different Inspectors assess the proposal. The individuals working with animals must obtain training certificates and another personal licence from the UK Government that dictates what each individual is allowed to do. So if you have that Eureka moment you are not going to work on it the next day.

However this new model may make it ethically difficult to justify using classical EAE. This model helped us to plan the optic neuritis trial that is now ongoing and is an example of Bench to Clinical activity

CoI. This work of Team G.