Background: In experimental autoimmune encephalomyelitis, inhibition of the renin-angiotensin system with angiotensin receptor blockers (ARBs) or angiotensin-converting enzyme (ACE) inhibitors resulted in a significantly ameliorated disease course. We evaluated the effects of ARBs and ACE inhibitors on the efficacy of interferon beta-1b in patients with relapsing-remitting multiple sclerosis (RRMS).

Animal studies may have suggested some use of ACE/ARB inhibitors that are used to control blood pressure can affect EAE. A different set of people, wonder if professional trialists ever talk to the people who made the discovery:-) looked at what happened on a clinical trial to assess the effects of beta interferon, where people were also taking ACE/ARB inhibitors and found no effect.

The authors suggest there may have been a worsening but let’s remember P (probability value) greater than 0.05 means there was no difference. The conclusion should be no affect on relapse rate (P=0.051)  or MRI lesion (P=0.057) for ACR inhibitor and no effect of ARB inhibitors P= (0.357).  So there was no beneficial effect..or significant worsening.


So time for another meta analysis, but if pharma don’t make their trial data open how can we do these retrospective analysis to see if there are drug-drug interactions maybe with access to large data sets you could see a benefit (or not) to aspirin. The authors have made the suggestion of worsening and therefore they need to follow this up get access to all beta interferon trial data and interrogate it.

However, I hear you say it is that rubbishy animal model (EAE) again, as there was no inhibition of disease in MS.

So another case of failure to translate from animals to humans!

Em, maybe we need to look at the animal studies and see how this was translated into the human studies. So the animal studies used 10mg/kg lisinopril (and 1mg/kg before disease induction) or enalapril  (ACE inhibitors) and 120mg/kg of Losartan (ARB) and they inhibited the development of EAE.

However, 10mg dose of lisinopril (about 0.15mg/kg) and 5 mg human dose of enalapril (0.07mg/kg) or 50mg of Losartan (less than 1mg/kg) so about 100 times lower dose and way above the ten times scaling for mice, so what would a comparable does have done in the human, well maybe caused too many side effects because of effects on blood pressure. So maybe a comparable animal and human does would do nothing, because when we look at what 100 times dose did? Well maybe not much, with probably most animals developing EAE with a minor diminution of disease. One would expect Gilenya to flat line the score at about 0 with essentially no disease at all in the same type of experiment. This tells us that you need to look at the data and not just the headline as so often happens in media circles. This is why you hear “Cure of the Week” every week. However, the question has to be put what was the effect of a human dose equivalent as the animal studies were performed along time after the human dosing schedule was known. Guideline 19 of ARRIVE guidelines asks for a report on the relevance to human biology, without proper dose-responses the answer may be “none”. 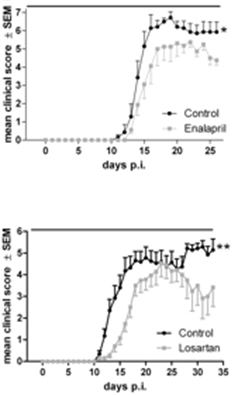 .
So it may perhaps be a case of overestimation of the drug effect in the EAE papers, on behalf of the neuros. Humans have as much to do in the failure as the animal models.