Did you know highly-effective DMTs increase your chances of falling pregnant? Why? #ClinicSpeak #MSBlog #MSResearch


“I have been saying for sometime that we should consider rebranding MS a pink-ribbon disease. MS is a disease of young woman of child-bearing age; female:male ratio is ~3:1 and climbing, mean age of onset is ~30 years of age with the majority of MSers present between the ages of 16 and 40. Therefore pregnancy is an important consideration when it comes to choosing a DMT. All the current DMTs have issues with pregnancy; woman are not meant  to fall pregnant on DMTs due to risk of teratogenicity (ability of a drug to cause malformations in the developing foetus). The study below highlights emerging data in relation to falling pregnant on fingolimod. Fingolimod is a very fat soluble drug and therefore will cross the placenta and get into the developing foetus’ body. The data below of 5 cases, or 7.6%, out of 66 pregnancies with exposure to fingolimod in the womb having congenital abnormalities is sobering. This rate is probably double the back ground risk. I was taught in medical school that between 2-4% of pregnancies in the general population were associated with congenital malformations with  50% of these being minor abnormalities and 50% major malformations. The bottom line is that all woman MSers going onto fingolimod, and other DMTs, need to counselled about contraception and asked whether or not they would be prepared to have a termination of pregnancy if they fell pregnant on a particular drug. The latter question often focuses the mind.”

“What is not highlighted in this paper is that in the pivotal trials the rate of pregnancy was higher in woman MSers on fingolimod than placebo. Why? I think this relates to fingolimod improving quality of life and increasing libido and sexual activity. A side of effect, or a wanted effect, of highly-effective DMTs is an improvement in your sex life and an increased chance of falling pregnant. I am not surprised by this finding. Libido and sexual activity is a sign of well-being and if fingolimod and other DMTs do this you would expect more pregnancies in the active treatment arm.”

“The paper below highlights the problem with maintenance therapies that is not a problem with induction therapies. Maintenance therapies have to be taken continuously therefore pose the greatest risk to pregnancy and the unborn child. Stopping a maintenance therapy also puts you at risk of rebound MS activity whilst you are waiting to fall pregnant. This is why induction therapies are going to be so appealing to woman wanting to have children. These treatments are given as short courses and the DMT is out of your system within days to weeks after completing the course. The treatment effect of induction therapies last months to years and hence you can fall pregnant without the anxiety about exposing your baby to excessive risks or your MS becoming active. This is why I think induction  therapies are going to change the way we approach treating MS, in particular for woman. It is a great pity that regulators and payers to don’t look at the advantage of induction therapies in the same way i do. The table below is a comparison of the two treatment strategies. You can make up your own mind about which one suits you.”


“Please note that the issues around pregnancy and DMTs are also relevant to breast feeding and DMTs. Most of the small molecule DMTs will cross into breast milk and hence breast feeding and taking most DMTs are contraindicated. This is less of an issue with some of the biologicals (protein therapies). The breast feeding issue has been covered before on  the blog but will need a separate Clinic Speak post.” 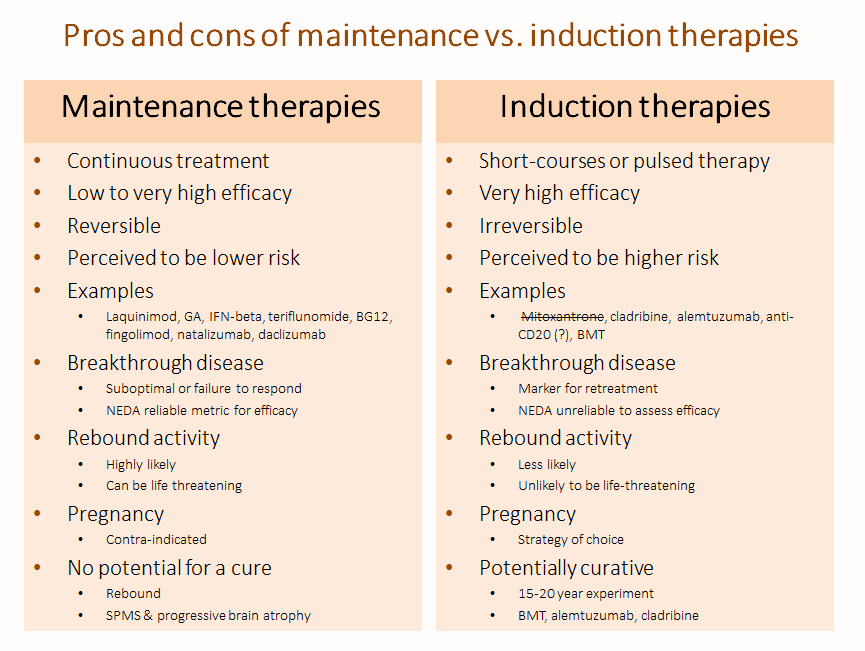 
OBJECTIVE: To report outcomes of pregnancies that occurred during the fingolimod clinical development program.


METHODS: Pregnancy outcomes from phase II, phase III, and phase IV clinical studies (with optional extensions) were reported by clinical trial investigators. Fingolimod exposure in utero was defined as fingolimod treatment at the time of conception or in the 6 weeks before conception.


RESULTS: As of October 31, 2011, 89 pregnancies were reported in completed or ongoing clinical studies, with 74 in fingolimod treatment arms. Of 66 pregnancies with in utero exposure to fingolimod, there were 28 live births, 9 spontaneous abortions, 24 elective abortions, 4 ongoing pregnancies, and 1 pregnancy with an unknown outcome (MSer lost to follow-up). Two infants were born with malformations: 1 with congenital unilateral posteromedial bowing of the tibia (bowed legs) and 1 with acrania (missing skull bones). Elective abortions were performed for 1 case each of tetralogy of Fallot (heart defect), spontaneous intrauterine death (death in the womb), and failure of foetal development. There were 5 cases (7.6%; 95% confidence interval 3%-17%) of abnormal foetal development in the 66 pregnancies that had in utero exposure to fingolimod. In all 5 cases, foetal exposure to the drug took place in the first trimester (first three months) of pregnancy.