Will MSers resident in the US travel south to Mexico to be treated with alemtuzumab? #MSBlog #MSResearch

“Genzyme  announced that Mexico’s national regulatory authority, COFEPRIS, has approved alemtuzumab for the treatment of MSers with relapsing remitting forms of MS to slow or reverse the accumulation of physical disability and reduce the frequency of clinical exacerbations. This is remarkable for two reasons; firstly, they are acknowledging that alemtuzumab can reverse the accumulation of disability in MSers and secondly, that they have licensed the drug despite the FDA’s decision not to. The fact that the Mexican licencse is more liberal that the Canadian license will give MSers in the US, who can afford it, an option of heading south for their treatment.”

“With regard to the improvement in disability after alemtuzumab treatment is the observation that it can be delayed with over 1 in 10 MSers having an improvement after year 2 is remarkable. In my experience this is not unique to alemtuzumab and I have seen it on natalizumab. I therefore suspect it is due to being on highly-effective treatment that suppresses ongoing damage and allows endogenous or self repair to occur. I used to tell all the MSers I looked after that most recovery from relapses occurs within 6 months with some additional recovery up until year 2. This was obviously incorrect, with high efficacy DMTs MSers can expect improvement beyond that.”

“I did an MS clinic yesterday and for some reason it was full of follow-ups of MSers on natalizumab. If it wasn’t for discussions around being JCV positive, PML risk mitigation and switching because of the latter, these MSers would have been in and out of my consulting room in minutes; not because I don’t want to see them simply because most of them are doing so well and have not symptomatic problems. A similar thing happens when I see the MSers who have been treated with alemtuzumab as part of the phase 3 clinical studies. It is simply amazing to see MSers who have had such active disease doing so well; we have really entered a new era of MS treatment. It is very satisfying.” 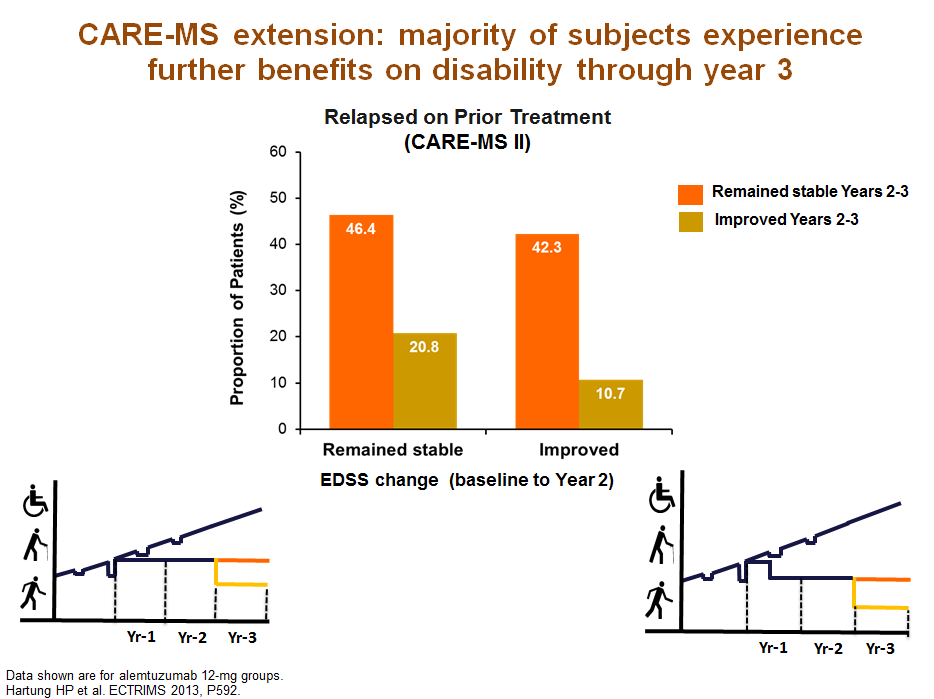