Are you prepared to have a bone marrow transplant? #MSBlog #MSResearch

“Bone marrow transplantation (BMT) using your own stem cells is the ultimate human experiment in an autoimmune disease. The hypothesis is simple; let’s ablate or destroy your immune system and then let your immune system reboot from scratch using harvested stem cells. It sounds straight forward but it is not. firstly, it is very difficult to destroy your immune system so  that when it reboots there is a chance the autoimmune cells will repopulate, i.e. your MS will return. Whilst you are waiting for your immune system to recover you are at high risk of complications from the treatment, i.e. infections, bleeding and anaemia. During this period you need bone marrow support. I did my house job on a haematology oncology ward and I used to look after the bone marrow transplant patients. Boy do they get sick and sick quickly. BMT is not for the faint hearted.” 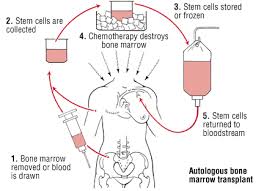 “It is very difficult, if not impossible to do randomised double-blind placebo-controlled trials to test BMT as a treatment strategy. Therefore we have to rely on observational data and compare it with natural history data of MS to get an idea of its effectiveness. The Swedish study below is in keeping with other country-wide data; BMT is a very effective treatment for highly-active RRMS. The problem is if you use this treatment in SPMSers that don’t so as well; i.e. it may stop relapes and MRI activity but it does not stop non-relapsing progressive disease. In fact the chemotherapy that is used to ablate the immune system is often neurotoxic (damages neurons) and may make hasten disease progression. We showed in collaboration with the group in Rotterdam that chemotherapy in BMT increases the amount of neurofilament released into the peripheral blood and the level of neurofilaments correlated with disease progression. Neurofilaments are a structural protein inside neurons and axons and are released when the neuron or axon are damaged.”

“Would you take the risk of BMT? You need to remember  that BMT is the ultimate induction therapy and potentially offers a cure. Similarly, to alemtuzumab therapy, we need to wait 15 to 20 years to see if these MSers rendered NEDA (no evident disease activity) are cured or will they come back with SPMS?”

“How does this fit in with the EBV hypothesis? Not sure, but BMT destroys the B-cell pool and hence targets EBV. There are some reports of people becoming EBV negative post BMT. So the fact that BMT works as a treatment for MS does not exclude EBV as a potential cause of MS.”

BACKGROUND: Autologous haematopoietic stem cell transplantation (HSCT) is a viable option for treatment of aggressive MS. No randomised controlled trial has been performed, and thus, experiences from systematic and sustained follow-up of treated MSers constitute important information about safety and efficacy. In this observational study, we describe the characteristics and outcome of the Swedish MSers treated with HSCT.


METHODS: Neurologists from the major hospitals in Sweden filled out a follow-up form with prospectively collected data. Fifty-two MSers were identified in total; 48 were included in the study and evaluated for safety and side effects; 41 MSers had at least 1 year of follow-up and were further analysed for clinical and radiological outcome. In this cohort, 34 MSers (83%) had relapsing-remitting MS, and mean follow-up time was 47 months.

RESULTS: At 5 years, relapse-free was 87%; MRI event-free 85%; expanded disability status scale (EDSS) score progression-free survival 77%; and disease-free survival (no relapses, no new MRI lesions and no EDSS progression) 68%. Presence of gadolinium-enhancing lesions prior to HSCT was associated with a favourable outcome (disease-free survival 79% vs 46%, p=0.028). There was no mortality. The most common long-term side effects were herpes zoster reactivation (15%) and thyroid disease (8.4%).

CONCLUSIONS: HSCT is a very effective treatment of inflammatory active MS and can be performed with a high degree of safety at experienced centres.