BACKGROUND: Patients who develop relapsing-remitting multiple sclerosis (MS) present with a first clinical demyelinating event. In this double-blind, multicentre, randomised, phase 3 study we investigated the effect of oral cladribine on conversion to clinically definite MS in patients with a first clinical demyelinating event, when given at the same doses shown to be effective in relapsing-remitting MS.

METHODS: Between Oct 21, 2008, and Oct 11, 2010, we recruited patients aged 18-55 years, inclusive, from 160 hospitals, private clinics, or treatment centres in 34 countries. Eligible patients had a first clinical demyelinating event within 75 days before screening, at least two clinically silent lesions of at least 3 mm on a T2-weighted brain MRI scan, and an Expanded Disability Status Scale score of 5·0 or lower. Patients with a first clinical demyelinating event ≤75 days before screening were randomly assigned (1:1:1) to receive cladribine tablets at cumulative doses of 5·25 mg/kg or 3·5 mg/kg or placebo. Randomisation was done with a central web-based randomisation system and was stratified by geographic region. Masking was maintained using a two-physician model. The primary endpoint of this 96-week study was time to conversion to clinically definite MS according to the Poser criteria.

INTERPRETATION: Both doses of cladribine significantly delayed MS diagnosis compared with placebo. The safety profile of cladribine was similar to that noted in a trial in patients with relapsing-remitting MS.

Cladribine was shown in phase III (CLARITY) studies to be at least as active as Alemtuzumab in phase III studies but was much safer, as it did not cause the autoimmunities that occurs in about 20-30% of people taking Alemtuzumab(Lemtrada). It likewise was associated with as many cancers as found following the use of Alemtuzumab, or Gilenya and others for that matter.

However, in the CLARITY trial there was unusually no cancers in the placebo group. This suggested a cancer risk of cladribine and caused the regulators in the EMA and FDA to ask for more safety studies. Another problems was the induction of leucopaenia (loss of white blood cells) that could lead to more cancer and infection problems. Loss of white blood cells is part of the action of the drug but the level of depletion could be in part controlled by dosing.
However in the trials the protocol meant repeat treatment without assessing the levels of white blood cells to determine if dosing was needed and so increase the risk of leucopaenia further. It is clear that cladribine could be an “induction therapy” taken as a short course within a year. Maybe you don’t need to retreat

However, Merck Serono in their wisdom had only done one pivotal trial rather than the usual two, perhaps relying on the published data with generic clabribine.  They paid the price for this big mistake.

So rather than take the time to start another trial, with all the cost and importantly time entailed, they decided to pull the plug and withdraw oral clabribine from market. This was much to the glee of Novartis who were in the race to get the first oral drug for MS and Genzyme/Sanofi who have Lemtrada in their stable against which Movectro would compete. It was also good news for Biogen trailing in the wings with the development of tecfidera….

Why Did Merck pull the plug?


Movectro was approved in Russia and Australia and so they were making some money but had not got the European and american markets which are the jewels in the Crown. By the time they had done another trial trial there would not be much patent life left. So the decision to cull the programme was probably for commercial rather than therapeutic reasons. Maybe Prof G will know this as he was PI on the CLARITY trial, but is probably gagged.


However, there were other commercial programmes on going at the time the oral cladribine (movectro) programme was pulled. One was cladribine verses beta interferon see the AAN 2013 meeting abstracts.

One trial reported here was called ORACLE, which treated people with clinically isolated syndrome. The drugs reduced the rate of conversion to clinically definite MS. Furthermore, if we look at the MRI data there was a relative failure in the control of disease activity in the first 3 months and then the activity flat lines. Some drugs take time to become active maybe along time for glaterimer acetate. So maybe if we re-baselined at 3 months then the effect of oral cladribine would have been much more impressive than it is. 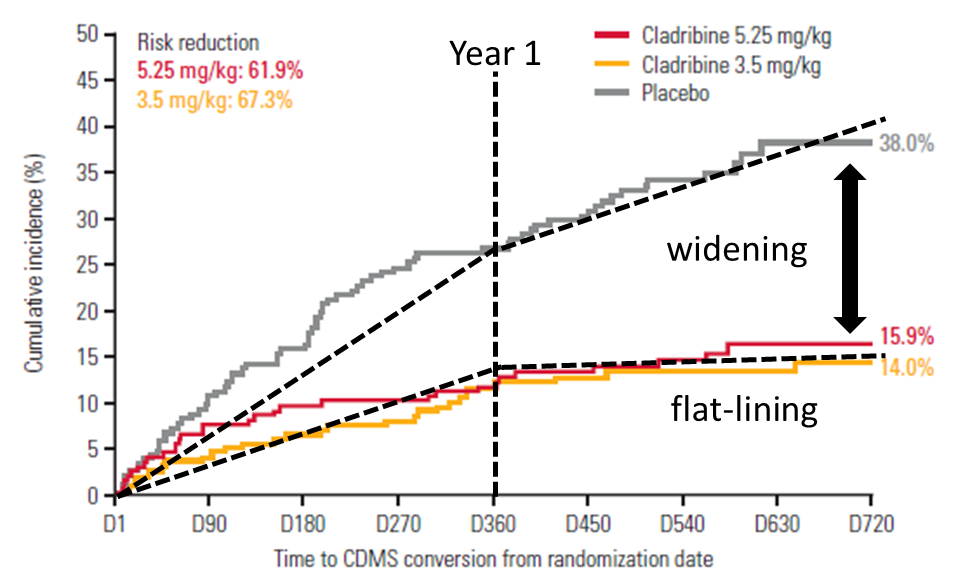 Were these people cured?

Will there be follow-up of these people now the plug has been pulled? I don’t know.
Furthermore, and importantly the increase cancer risk did not materialise and there were more cancers (i.e. at the natural background level of cancers) in placebo . This suggested that it was a false signal in the CLARITY trial and the regulators fears were unfounded.

Therefore, the FDA and the EMA have thrown away a very useful opportunity. Will there be more studies on oral cladribine. Probably not unless Merck decide to do it. Movectro was a pro-drug of generic cladribine, a potentially “disruptive influence” (I got this term from a financial report. This relates to the business worlds view of Academic Neurologists bringing in a cheap drug to compete with the pharma machine) to the pharma MS cash cow.

What about other forms of (generic) of injectable cladribine. An opportunity? Any Neuros out there willing to try? The drug has been tarnished in the eyes of Neuros. Is the benefit good enough 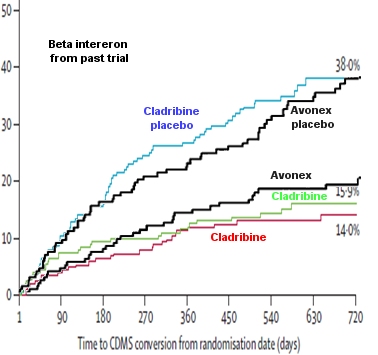 However, there are other me-too drugs that target this pathway such a Clofarabine another pill…but who has the licence on this?

Oh it looks like it could be Genzyme….Will they compete against their own alemtuzumab and develop it for MS….or is it stuck on a shelf as far a MS goes? Where’s your money going on this one. Another could be Fludarabine,but who will pay for phase II and two phase III trials and the licensing costs. I bet No one. There is no academic glory in doing two phase III studies yet pharma and regulators (which incidently are largely funded by pharma about 86% for the EMA and about 100% for the MHRA) have created this requirement…which ensures the “disruptive influence” will never occur. Are there any Neuros out there that will prove me to be wrong on this


Thats why we need a big pharma alternative to incentivize pharma to do these studies. 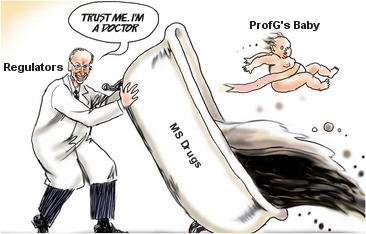 Maybe ProfG will comment on this..it was his baby thrown out with the bathwater.