Autologous haematopoietic stem cell transplantation (HSCT) is commonly employed for haematologic and non-haematologic malignancies. In clinical trials, HSCT has been evaluated for severe autoimmunity as a method to “reset” the immune system and produce a new, non-autoimmune repertoire. While the feasibility of eliminating the vast majority of mature T cells is well established, accurate and quantitative determination of the relationship of regenerated T cells to the baseline repertoire has been difficult to assess. Here, in a phase II study of HSCT for poor-prognosis multiple sclerosis, we used high-throughput deep TCRβ chain sequencing to assess millions of individual TCRs per patient sample. We found that HSCT has distinctive effects on CD4+ and CD8+ T cell repertoires. In CD4+ T cells, dominant TCR clones present before treatment were undetectable following reconstitution, and patients largely developed a new repertoire. In contrast, dominant CD8+ clones were not effectively removed, and the reconstituted CD8+ T cell repertoire was created by clonal expansion of cells present before treatment. Importantly, patients who failed to respond to treatment had less diversity in their T cell repertoire early during the reconstitution process. These results demonstrate that TCR characterization during immunomodulatory treatment is both feasible and informative, and may enable monitoring of pathogenic or protective T cell clones following HSCT and cellular therapies. So after transplant common some T cell receptor types disappeared and a new repertoire of CD4 T cells developed. Maybe this contributed to the treatment effect and could suggest that such T cells play a part in the problem of MS. In contrast common CD8  (virus killing type) T cells regrew. In the people that did not respond to treatment they did not develop as broad repertoire after treatment perhaps meaning that the disease causing cell persisted. So this diversity may help develop immune tolerance to stop MS from re-emerging

It was possible to work out what some of these T cells respond to and it was found that some respond to Epstein Barr Virus and expansion of such cells following reactivation of the infection could be seen. In one person made up 35% of their CD8 cell population. However it is good that there anti-infection responses could regenerate as it will have health benefits for the transplant recipient. 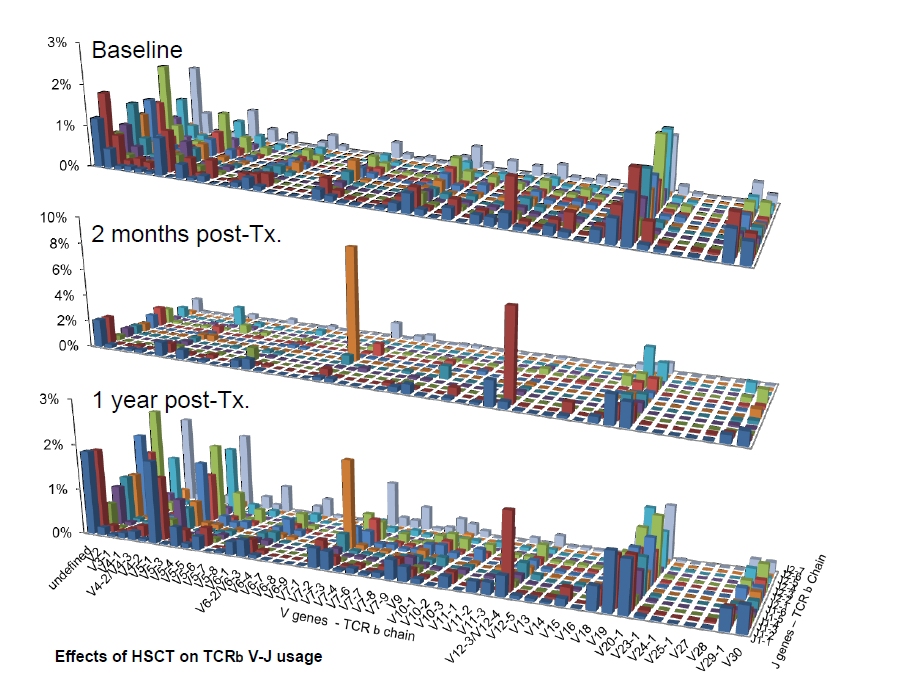 This figure shows how diverse the immune response is.after replacement initially there are few specificities maybe the brown ones represent anti-viral responses . With time the repertoire diversifies again

In healthy donors this repertoire was very 90% stable. Maybe we can use such analysis to get at the causal cells, what would be different just before a relapse?

Have a read its open source