“My post on bone marrow transplantation (BMT) yesterday generated some discussion about brain atrophy. The BMT procedure requires chemotherapy to ablate or wipe-out your immune system to allow stem cell transplantation. The chemotherapy drugs that are used are neurotoxic, i.e. they damage the brain. In MSers who already have pre-existing damage their nerve cells are more susceptible to chemotherapy damage. The following study I was involved shows that when SPMSers are given chemotherapy they undergo increased neuronal loss, which is associated with faster progression on the EDSS and greater brain atrophy. The data speaks for itself. The picture below is what we call a survival curve of EDSS progressions and you can see that the MSers who had high serum levels of the neuronal toxicity marker neurofilament were much more likely to progress than those who did not have raised neurofilament levels. Similarly, brain atrophy rates in SPMSers were in the order of 2.1% per year in those who had a BMT compared to only 1.2% per year in SPMSers who did not have a BMT; the upper limit of normal for brain atrophy in healthy adults is generally accepted to be 0.4% per year. The bottom line is that if you have SPMS BMT is likely to accelerate your disease progression. As a result of these observations and other data most MSologists have stopped doing BMT in SPMS and limit it to those with RRMS. However, with the advent of highly-effective DMTs such as alemtuzumab, natalizumab, fingolimod and the anti-CD20s in development it is hard to justify BMT in view of its risks.” 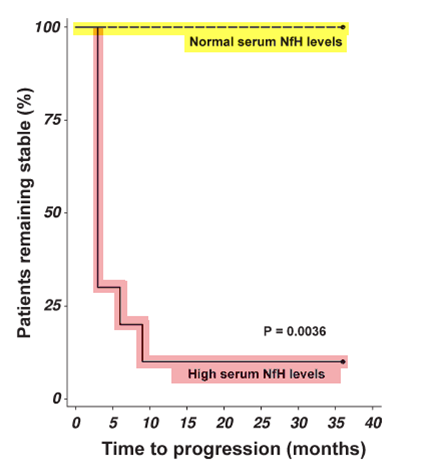 “I qualified as a neurologist, in the UK, in 1998 and got my first job at the Royal Free Hospital in London. At the time the Royal Free was pioneering BMT in other autoimmune diseases. Due to the environment at the Royal Fee I did due diligence on BMT in MS and came to the conclusion at the time that the risks outweighed the benefits of the treatment. In the 1990s the mortality of MSers undergoing BMT was ~5%, i..e 1 in 20 MSers who had a BMT would die from the procedure. Since then the mortality rates have dropped to about 0.5-1.0%; that is still a chance of 1 in 100 to 1 in 200 of dying from the procedure. Would you take this risk?”

“BMT is an induction therapy and hence offers you a potential chance of a cure; that is if MS is an autoimmune disease. BMT is one of the ongoing 15-20 year experiments testing this hypothesis.”

OBJECTIVE: Chronic neurotoxicity is a recognized long-term complication following chemotherapy in a range of diseases. Neurotoxicity adversely affects patients’ quality of life. The objective of this study is to examine whether there is evidence of acute neurotoxicity.

INTERPRETATION: Neurotoxicity is an unwanted acute side effect of aggressive chemotherapy.

CoI: Prof. G was a co-author on this study.