Background: Absence of clinical and radiological activity in relapsing-remitting multiple sclerosis (RRMS) is perceived as disease remission. We explored the role of persisting inflammation during remission in disease evolution.
Methods: Cerebrospinal fluid (CSF) levels of interleukin 1beta (IL-1beta), a major proinflammatory cytokine, were measured in 170 RRMS patients at the time of clinical and radiological remission. These patients were then followed up for at least 4 years, and clinical, magnetic resonance imaging (MRI) and optical coherence tomography (OCT) measures of disease progression were recorded.
Results Median follow-up of RRMS patients was 5 years. Detection of CSF IL-1beta levels at the time of remission did not predict earlier relapse or new MRI lesion formation. Detection of IL-1beta in the CSF was instead associated with higher progression index (PI) and Multiple Sclerosis Severity Scale (MSSS) scores at follow-up, and the number of patients with sustained Expanded Disability Status Scale (EDSS) or Multiple Sclerosis Functional Composite worsening at follow-up was higher in individuals with detectable levels of IL-1beta. Patients with undetectable IL-1beta in the CSF had significantly lower PI and MSSS scores and a higher probability of having a benign MS phenotype. Furthermore, patients with undetectable CSF levels of IL-1beta had less retinal nerve fiber layer thickness and macular volume alterations visualized by OCT compared to patients with detectable IL-1beta.
Conclusions: Our results suggest that persistence of a proinflammatory environment in RRMS patients during clinical and radiological remission influences midterm disease progression. Detection of IL-1beta in the CSF at the time of remission appears to be a potential negative prognostic factor in RRMS patients.

We have recently shown in EAE that you can block relapsing disease but you can still get “slow burning” nerve loss from the outset. In some strains it takes just on attack to get this in motion in others many more attacks before for frank clinical progression starts. It is of interest in this study in MS they looked by MRI and clinical parameters to see that disease had gone into complete remission (so NEDA = No evident disease activity by ProfGs standard). However was it real remission?

In this study they did a spinal tap and then looked for a molecule called interleukin-1 (IL-1), which is a protein that is involved in the production of an inflammatory response and has been implicated in the formation of nerve damage. So despite the belief that the disease was incomplete remission, there was evidence of a grumbling glial (the likely source of the IL-1) response. This would be associated with low grade inflammation, suggesting that in this group there may be “slow burn” occurring. This invisible inflammatory flame burns nerves, and smouldering away creeps burning but with not enough intensity to start a fire, such that the damage is obvious.

So what had happened 5 or more years down the line.

Well every one had been put on DMT and they worked or failed at the same rate irrespective of whether IL-1 originally was detected or not.

However, when  disability was looked at it was found those people with IL-1 in their cerebrospinal fluid were more likely to have progressive disease. 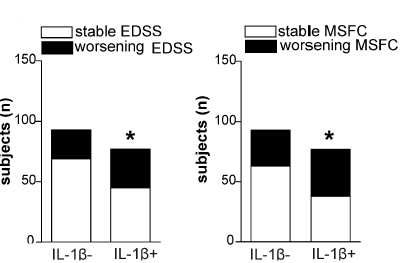 So maybe setting off the “slow burn” is associated with the development of progression. Therefore putting out the fire is needed. This is what DE-FLAMES aims to do. It is amazing that even in a point-in-time could have impact many years down the line. It would need serial CSF to determine whether IL-1 and the slow burn was persistent or not…Maybe this can be measured in DE FLAMES as a marker of treatment activity.

However, it points to looking outside the T cell and probably B cell box to get at the problem!

Maybe we have already, as some of the DMT may block the IL-1 cytokine pathway.