What evidence is there for stating “Time is Brain”? #MSBlog #MSResearch

“In view of the post today showing that there is no obvious change in cancer risk I think it is time to revisit the 21-year follow-up of the pivotal interferon-beta-1b (Betaseron/Betferon) study.”

“Did you know that a delay in access to interferon-beta-1b reduces your chances of being alive at 21 years by about 50%? This fact is amazing. How is interferon-beta doing this? Is is it due to its impact on MS or is it doing it via another mechanism, for example reducing your chances of dying from cancer or heart disease? To explore this the investigators’ looked at the causes of death in those who had died before the census at 21 years. Surprise, surprise in the 69 MSers for whom information on the relationship of death to MS was available 78% were judged to have died from MS-related complications. This is telling you that IFN-beta is increasing your life expectancy by reducing MS-related complications that can cause death in the future. The latter include swallowing problems that are associated with aspiration pneumonia, urinary dysfunction that lead to urinary tract infections and septicaemia, immobility and pressure sores, falls and fractures, etc. You need to remember that this was a placebo-controlled study and the subjects on placebo were switched to active treatment after 3 years, with some subjects waiting up to 5 years (trial recruitment was from June 1988 to May 1990; with placebo-treated subjects given free commercial supply as of October 1993). What this study shows is that delaying access to treatment by just 3-5 years has a major impact on long-term outcomes. It is interesting that nobody listening to my debate clocked this fact last Saturday. If they had they may have voted for early treatment.” 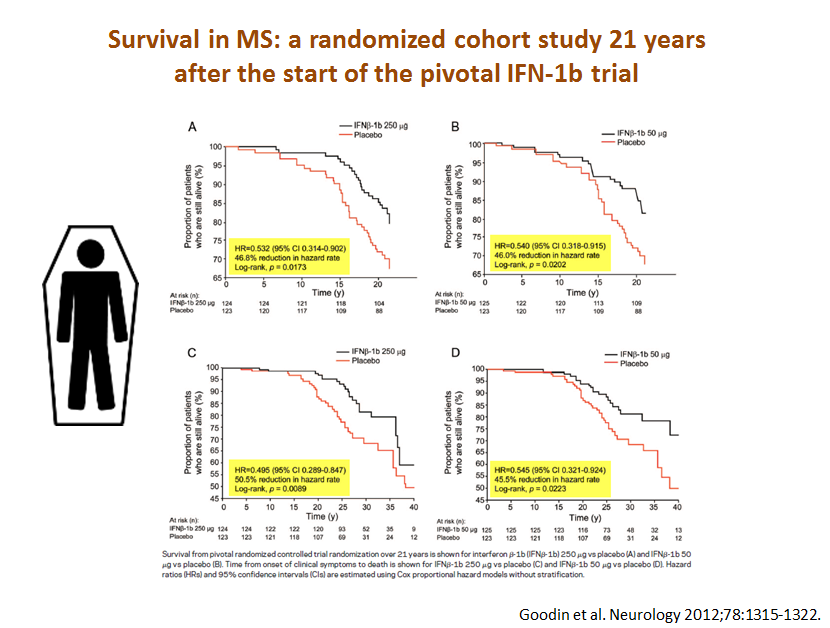 “The other thing to register is that if this impact on survival can occur with IFNbeta-1b, which is only a moderately effective agent, what would happen with a high-efficacy DMT?”

“This data supports the maxim “Time is Brain” or “Time is Life“, Why would anyone wait to treat someone with active MS knowing this data?”

OBJECTIVES: Compared
with controls, multiple sclerosis (MS) patients die, on average, 7-14
years prematurely. Previously, we reported that, 21 years after their
participation in the pivotal randomised, controlled trial (RCT) of
interferon β-1b, mortality was reduced by 46-47% in the two groups who
received active therapy during the RCT. To determine whether the
excessive deaths observed in placebo-treated patients was due to
MS-related causes, we analysed the causes-of-death (CODs) in these
three, randomised, patient cohorts.

PARTICIPANTS: In
the original RCT, 372 patients participated, of whom 366 (98.4%) were
identified after a median of 21.1 years from RCT enrolment.

INTERVENTIONS: Using multiple information sources, we attempted to establish COD and its relationship to MS in deceased patients.

RESULTS: Among
the 366 MS patients included in this LTF study, 81 deaths were
recorded. Mean age-at-death was 51.7 (±8.7) years. COD, MS relationship,
or both were determined for 88% of deaths (71/81). Patients were
assigned to one of nine COD categories: cardiovascular disease/stroke;
cancer; pulmonary infections; sepsis; accidents; suicide; death due to
MS; other known CODs; and unknown COD. Of the 69 patients for whom
information on the relationship of death to MS was available, 78.3%
(54/69) were adjudicated to be MS related. Patients randomised to
receive placebo during the RCT (compared with patients receiving active
treatment) experienced an excessive number of MS-related deaths.