#MSBlog: to repurpose or not, that is the question?


This is a reposting from December 2012.

“The length of time it takes to develop new drugs is frustratingly long and expensive. A short-cut is to repurpose existing drugs; i.e. drugs that have already been through development and are either licensed for another indication or sitting on the shelf. If you repurpose these drugs for MS, the development time and costs are potentially shortened. The incentive for repurposing drugs is already in place if the Pharma company can get a new patent on the drug.

There are many examples were repurposing is working in MS. For example:

1. Fampridine; the slow-release formulation of 4-aminopyridine.
2. Teriflunomide; the active metabolite of lenflunomide.
3. Alemtuzumab; an oncology drug.
4. BG12; a modification of a drug for psoriasis
5. Ocrelizumab; a newer version of rituximab an oncology drug that also is licensed for rheumatoid arthritis.
6. Daclizumab; an earlier version of the drug was used in transplantation
7. Fingolimod; this was originally developed for the field of transplantation.

All these repurposed drugs are protected by patents, which prevents cheaper generic equivalents or biosimilars from entering the market for a pre-determined period of time. This is very important for the Pharma companies concerned as is allows them to get a return on investment and to make a profit.

Do you think these repurposed drugs are any cheaper than novel drugs?

A problem arises with the repurposing of drugs that are off patent; it is not possible to protect them from generic competition under the currently regulatory framework. For example, simvastatin, phenytoin, oxcarbazepine, amiloride and riluzole; all of these drugs are currently being tested in progressive MS.

I hope you can see why it is important to have a patent? A patent defines a period of market exclusivity, which allows the Pharma company, or organisation, a period of time to claw back their investment in the development programme of the drug and to pay for any post-marketing requirements that the regulators may ask for. For example, the latter may include a safety and pregnancy register.

What the Big Pharma Alternative is trying to address is the lack of incentives to repurpose off-patent drugs. How do we raise the necessary resources to test off-patent drugs in phase 3 and if positive to get them licensed for MS and to finance the post-marketing requirements that may come with a license? If we don’t address this problem we are unlikely to speed up drug development for progressive MS and we are going to have to discard several potentially effective drugs for progressive MS.” 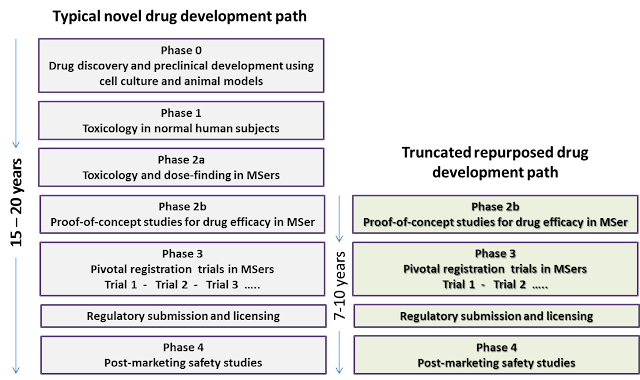