“However, contrary to this commentators position I am not trying to represent any particular drug or product, all I am trying to do is promote a new treatment strategy of treat-2-target of NEDA (no evident disease activity). How you achieve NEDA is up to you and your neurologist to decide. You may want to start with a safe first-line treatment and switch and/or escalate if you have breakthrough disease, or you may not want to take the chance of waiting 2 to 3 years to see if you are a responder to the less efficacious treatments and choose to start on a highly efficacious treatment that increases your chances of achieving NEDA. The choice is yours or your neurologists. The evidence that MSers who achieve NEDA do better in the short and intermediate term (up to 15 years) is now well established from several data sets. Its up to you if you want to accept this data or wait for more to emerge.”


“I often use rheumatoid arthritis as an analogy when discussing NEDA. When rheumatologists adopted their treat-2-target algorithm they did not have the necessary class 1 evidence that is required by healthcare payers today. They simply based their treatment strategy on the scientific principle that ongoing inflammation in joints could not be good for the joints in the long-term, hence it better to suppress this inflammation early and as effectively as possible. This strategy has led to stunning results with the amount of end-organ joint damage dropping precipitously. The number of joint replacements required in RAers treated-2-target of NEDA is now very low. What we are trying to do is copy the rheumatologists. Ongoing inflammation in the brain and spinal cord of MSers cannot be good in the long-term. By suppressing inflammation as early and effectively as possible in MS we should reduce end-organ damage and delay, or hopefully prevent, MSers becoming disabled. Some neurologists may disagree with this position, but that is fine. You need to ask yourself are you happy with their position on this? In the UK, and Europe, adopting T2T-NEDA strategy is complicated by the fact that regulators and payer restrict access to the more efficacious agents, by making them second or third line. In countries were there are no prescribing restrictions the adoption of treat-2-target of NEDA is very well established, for example in Australia and the USA. What you need to find out is your neurologist’s reluctance to adopt the treat-2-target of NEDA paradigm because they don’t accept the strategy or is it because they are hand-cuffed by local, regional or national prescribing guidelines? It these guidelines that has resulted in UK MSologists getting  together and proposing to do the NEDA trial. By doing this trial we hope to produce class 1 evidence, in a randomised controlled trial, to show that treating-2-target of NEDA with zero tolerance for inflammatory disease activity results in better outcomes for MSers. I have already mentioned to you that when I presented this concept to Australian neurologists they thought this trial was unethical and asked what neurologist would allow half their patients not to be treated to target? This is why I have hypothesised that when MSBase has enough data it will clearly show Australian MSers doing better than MSers living in European countries in which we are unable to treat-2-target of NEDA.” 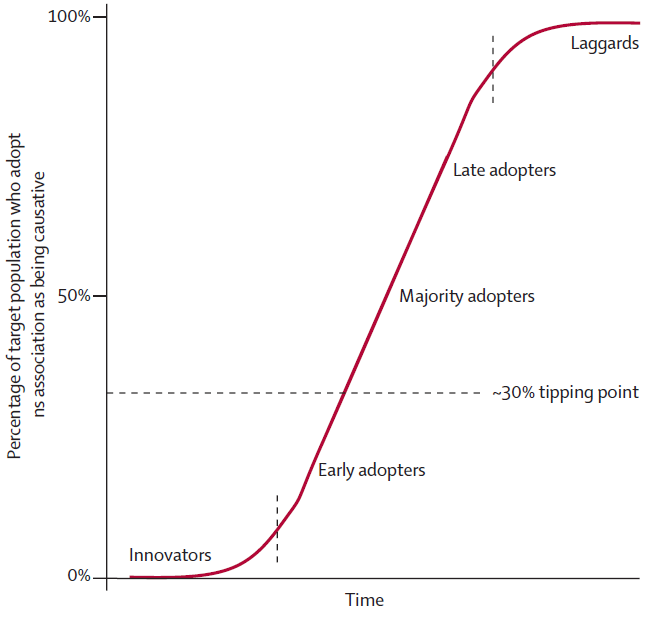 “Is there another explanation for neurologists disagreeing with my approach? To answer this we need to turn to the social scientists who study the diffusion of ideas or innovations in society. The late Everett Rogers, a sociologist, was the first to study this phenomenon in detail and wrote a book on this called ‘The Diffusion of Innovations‘. He worked in agriculture and wondered why certain societies were such rapid adopters of new agricultural innovations, whereas others were not. Why do some neurologists adopt new treatment paradigms so rapidly and others do not? The curve above describes the different phases of adoption of new innovations. Firstly you have the innovators, i.e. those who came up with the strategy of treating-2-target of NEDA. You then get the early adopters, like me, who accept the benefits of the new innovation and change their practice, this is followed by the late or majority adopters and finally the laggards. The interesting thing is that when approximately 30% of the target group adopt a new practice it is more than likely that the innovation will be successful and be adopted by the majority of the target audience. In Australia the tipping point has been reached; of the neurologists I met only one out of 30 to 40 neurologists did not T2T-NEDA. In specialist MS centres in the USA the same thing has already occurred. In comparison, I am told by my US colleagues that in small general private neurology practices T2T-NEDA has yet to be widely adopted. The reason for this is education and logistics; not all neurologists have been exposed to the concepts that underpin T2T-NEDA and they have difficulty implementing the strategy locally. This is why Rick Rudick and his colleagues at the Cleveland Clinic have been holding their annual NEDA meeting to help speed up the diffusion of this innovation. We have recently copied the Cleveland Clinic and held our first UK NEDA meeting. As part of this meeting we did a national poll of MSologists and had 56 responses. 64% of UK MSologists were aware of NEDA. After explaining NEDA the majority agreed that NEDA was a valid treatment target; only 9% disagreed with the concept of T2T-NEDA. As expected there was some disagreement on how to achieve NEDA; i.e. maintenance-escalation vs. early-induction. For me this meeting was a big success for the simple reason that it showed that UK neurologists have adopted T2T-NEDA and supportive of trial that is needed to produce the necessary data to convince NICE and NHS England to change their current position. Interestingly, this may all become irrelevant since NICE has rubber-stamped the European Medicine Agency’s marketing authorisation for alemtuzumab as a first-line drug for adult MSers with active disease as defined clinically or by MRI. This alone will make our NEDA trial very difficult to do. Sometimes the adoption of new innovations get support from unlikely champions; NICE is a real stickler for data they must see something in the alemtuzmab data set others have not.”

“So contrary to yesterday’s commentary that ‘….there are legions of neurologists who disagree with Giovannoni’ the evidence in the UK is to the contrary. We are well above the 30% tipping point and into the late adoption part of the T2T-NEDA diffusion curve.”