Hidaka Y, Inaba Y, Matsuda K, Itoh M, Kaneyama T, Nakazawa Y, Koh CS, Ichikawa M. Cytokine production profiles in chronic relapsing-remitting experimental autoimmune encephalomyelitis: IFN-γ and TNF-α are important participants in the first attack but not in the relapse. J Neurol Sci. 2014 Mar. pii: S0022-510X(14)00152-X. doi: 10.1016/j.jns.2014.02.039. [Epub ahead of print
Multiple sclerosis (MS) is a chronic demyelinating disease often displaying a relapsing-remitting course of neurological manifestations that is mimicked by experimental autoimmune encephalomyelitis (EAE) in animal models of MS. In particular, NOD mice immunized with myelin oligodendrocyte glycoprotein peptide 35-55 develop chronic relapsing-remitting EAE (CREAE). To elucidate the mechanisms that cause MS relapse, we investigated the histopathology and cytokine production of spleen cells and mRNA expression levels in the central nervous system (CNS) of CREAE mice. During the first attack, inflammatory cell infiltration around small vessels and in the subarachnoid space was observed in the spinal cord. Spleen cell production and mRNA expression in the CNS of several cytokines, including IFN-γ, TNF-α, IL-6, IL-17, and CC chemokine ligand 2 (CCL2), were higher in CREAE mice than in controls. Afterwards, parenchymal infiltration and demyelination were observed histologically in the spinal cord and corresponded with the more severe clinical symptoms of the first and second relapses. IL-17 and CCL2, but not IFN-γ, TNF-α, or IL-6, were also produced by spleen cells during recurrences. Our results suggested that the immune mechanisms in relapses were different from those in the first attack for CREAE. Further investigation of CREAE mechanisms may provide important insights into successful therapies for human relapsing-remitting MS.

At team G we have probably done more relapse treatment experiments that most other groups in the world and it has been clear to us that the first phase is not the same as subsequent phases.

This is what this study is saying 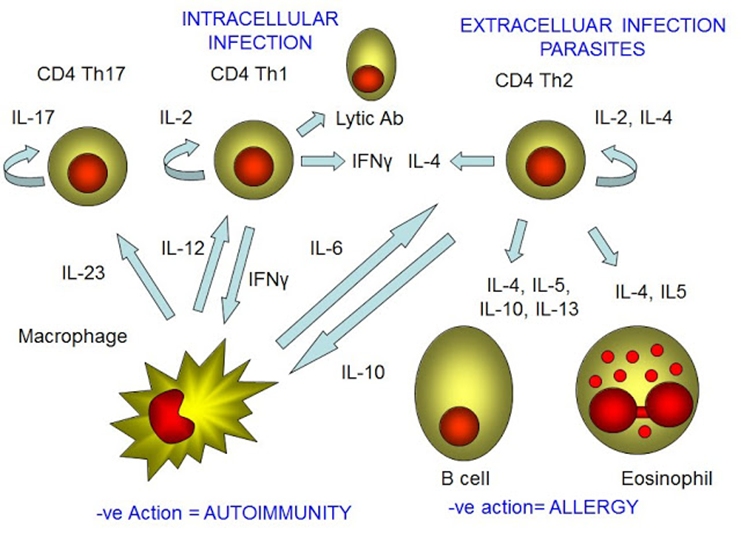 We know this but is this a universal thought
Wojkowska DW, Szpakowski P, Ksiazek-Winiarek D, Leszczynski M, Glabinski A. Interactions between Neutrophils, Th17 Cells, and Chemokines during the Initiation of Experimental Model of Multiple Sclerosis. mediators Inflamm. 2014;2014:590409
Experimental autoimmune encephalomyelitis (EAE) is an animal model of multiple sclerosis (MS) in which activated T cell and neutrophil interactions lead to neuroinflammation. In this study the expression of CCR6, CXCR2, and CXCR6 in Th17 cells and neutrophils migrating to the brain during EAE was measured, alongside an evaluation of the production of IL-17, IL-23, CCL-20, and CXCL16 in the brain. Next, inflammatory cell subpopulations accumulating in the brain after intracerebral injections of IL-17 or CXCL1, as well as during modulation of EAE with anti-IL-23R or anti-CXCR2 antibodies, were analyzed. Th17 cells upregulate CXCR2 during the preclinical phase of EAE and a significant migration of these cells to the brain was observed. Neutrophils upregulated CCR6, CXCR2, and CXCR6 during EAE, accumulating in the brain both prior to and during acute EAE attacks. Production of IL-17, IL-23, CCL20, and CXCL16 in the CNS was increased during both preclinical and acute EAE. Intracerebral delivery of CXCL1 stimulated the early accumulation of neutrophils in normal and preclinical EAE brains but reduced the migration of Th17 cells to the brain during the preclinical stage of EAE. Modulation of EAE by anti-IL-23R antibodies ameliorated EAE by decreasing the intracerebral accumulation of Th17 cells.
The difference between the the first attack and relapses may in part be a reason why drugs fail to translate from animals to humans. and may be a reason why sometimes Dogma becomes the Dogs Breath. 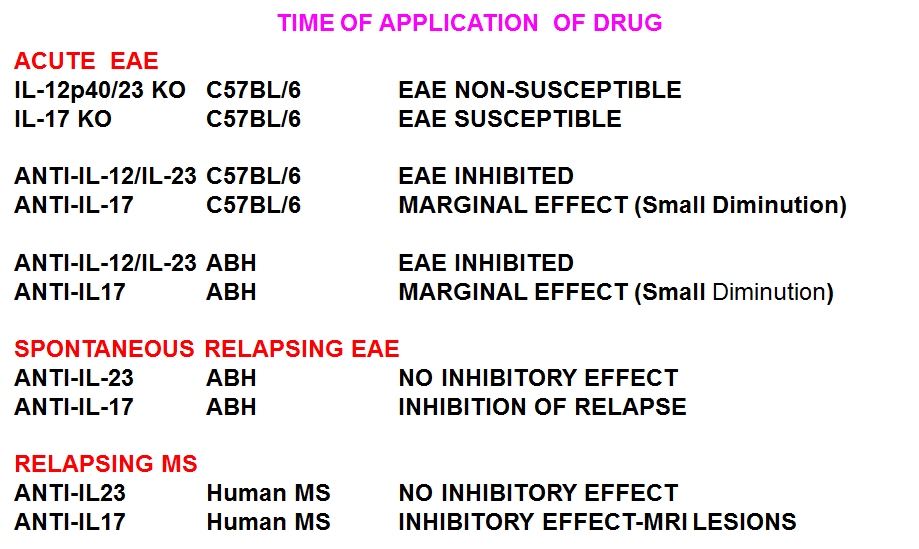