Will NEDA give us a false sense of security? How big is the problem of slow burn? #MSBlog #MSResearch


“We ran a teaching course for trainee neurologists and clinical nurse specialists this week. I gave a talk stressing that treating-2-target of no evident disease activity (NEDA) may not be good enough. I used an example of a patient of mine of treatment who had NEDA, but her serial MRI scans over 4 years showed progressive brain atrophy. This young woman had no relapses, her physical disability was stable (I can’t comment about her cognition because we don’t routinely measure it) and her MRI has shown no new lesions. She was being treated-2-target of NEDA and yet were not addressing end-organ damage. In other words something was continuing to shred her brain. May be it was the inflammation that she had prior to starting her DMT and been rendered as having NEDA? This is possible as she had highly-active MS and has a high lesion load”

“One of the smart young registrars in the audience was worried about this patient and said that he had concerns about some of the low to moderate efficacy drugs that would result in a proportion of MSers being rendered NEDA, but did as these drugs have no impact on brain atrophy, or end-organ damage, we were being lulled into a false sense of security and that over time this group of MSers will do worse than if they were elevated, or started early, on a more effective DMT that slows are normalises brain volume loss. I agreed with him and made the case for us to get brain atrophy measurements and spinal fluid neurofilament levels into clinical practice as soon as possible. Both these biomarkers will hopefully allow us to escalate, or switch, treatment earlier and will allow us to monitor MSers to see if we need to change our current definition of NEDA.”


“When we switched using the term DAF (disease-activity free) to NEDA (no evident disease activity) one of the reasons for doing this was to allow us to evolve the definition overtime as advances occurred in the field. I don’t think we are there yet. There are a lot of problems incorporating brain atrophy measurements into clinical practice at present. However, I am confident that we will overcome the problems in the near future. What we need is to develop standard methods to get rid of, or at least minimize, the influence of day-to-day factors that affect brain atrophy, for example alcohol use, dehydration, medications, etc. We also need better metrics with lower variability; I think the latter is possible. One of the things hampering the field at the moment is that all the MRI units working on this want to champion their own methods and not work towards validating and using the best method. This is not an insurmountable problem and could be changed by a global research initiative similar to the one in Alzheimer’s disease (ADNI). I think routine spinal fluid neurofilament measurements may be easier to standardise; but will this be enough and will it be sensitive enough to detect and monitor slow burn?” 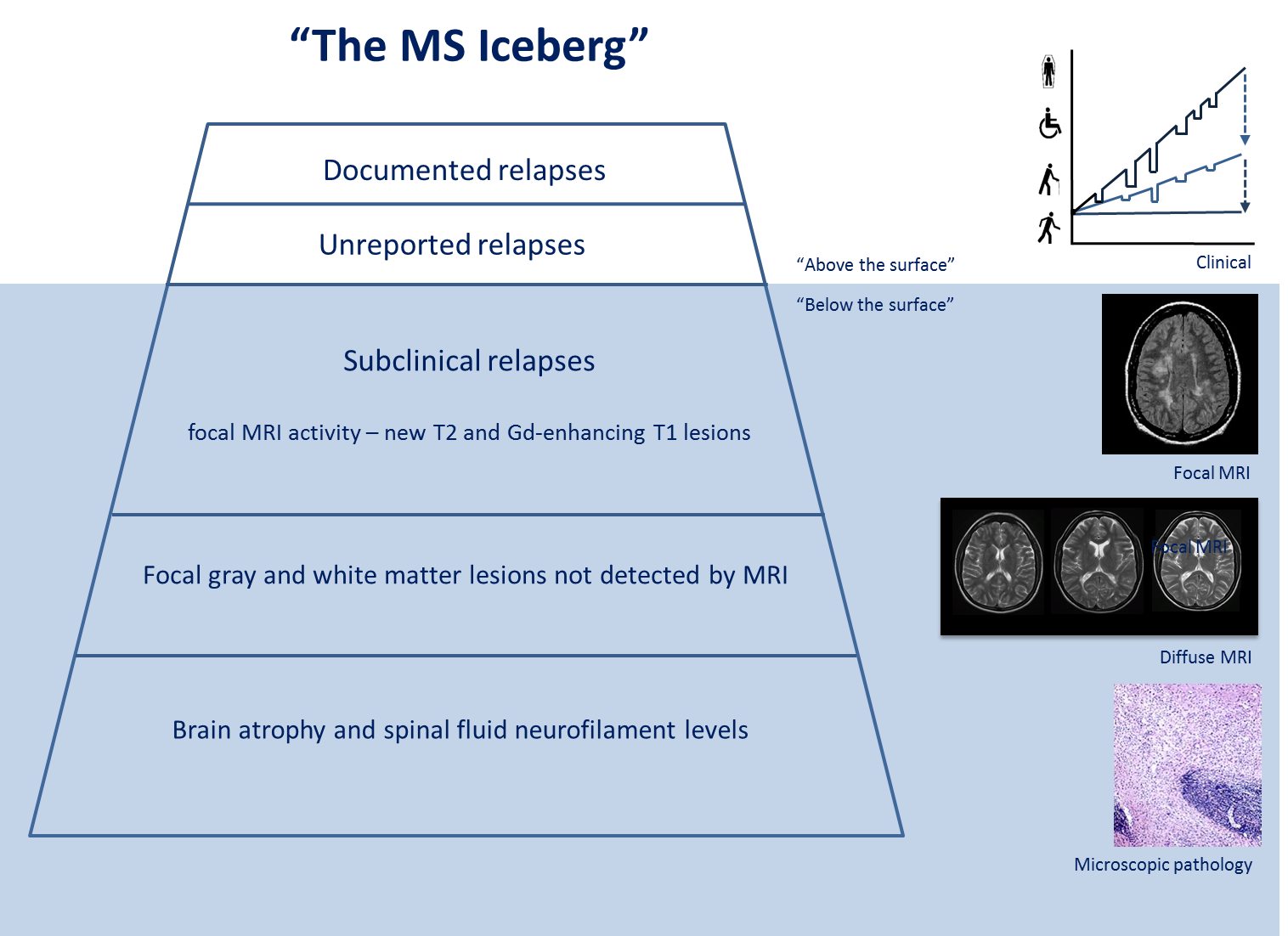 “On reflection, I agree that having large numbers of MSers on drugs that suppress macroscopic inflammation, inflammation associated with relapses and focal MRI activity, but are not sufficient to suppress microscopic foci of inflammation, and the slow burn we see in progressive MS, may be a bigger problem than we realise. This is why we need better tools and markers to define and investigate this problem.”