Current therapies for multiple sclerosis (MS) are largely palliative, not curative. Mesenchymal stem cells (MSCs) harbour regenerative and immunosuppressive functions, indicating a potential therapy for MS, yet the variability and low potency of MSCs from adult sources hinder their therapeutic potential. MSCs derived from human embryonic stem cells (hES-MSCs) may be better suited for clinical treatment of MS because of their unlimited and stable supply. Here, we show that hES-MSCs significantly reduce clinical symptoms and prevent neuronal demyelination in a mouse experimental autoimmune encephalitis (EAE) model of MS, and that the EAE disease-modifying effect of hES-MSCs is significantly greater than that of human bone-marrow-derived MSCs (BM-MSCs). Our evidence also suggests that increased IL-6 expression by BM-MSCs contributes to the reduced anti-EAE therapeutic activity of these cells. A distinct ability to extravasate and migrate into inflamed CNS tissues may also be associated with the robust therapeutic effects of hES-MSCs on EAE. 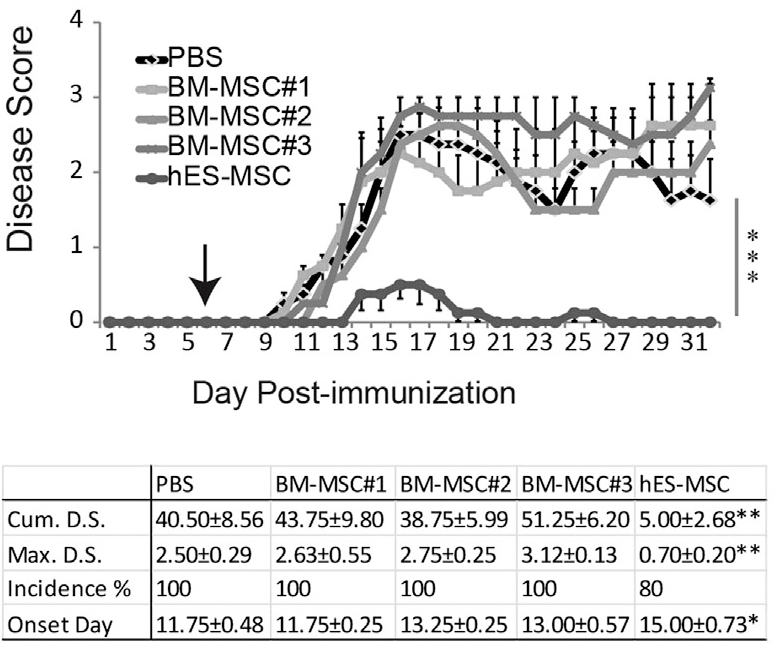 This may not be a good sign for the human trials where bone marrow derived mesenchymal stem cells are being used.

Do these cells turn into new nerves…I think the answer is generally no as the cells aren’t around long enough.

The inference is that these cells work by a low production of interleukin-6, which can have pro and anti-inflammatory effects. Would simple blockade of interleukin 6 do the job? Maybe, if you take a mouse that does not produce interleukin-6 it does not get EAE and if you block interleukin-6 before disease starts, they do not get EAE However the effect may be context and timing dependent.

Will people risk taking foreign (That is coming from someone else not some other country) embroyo-derived cells, which have the benefit of mass production but also the risk of mass rejection, over their own cells. Will they do better than conventional immunosuppressive treatments?