Introduction In the human demyelinating central nervous system (CNS) disease multiple sclerosis, remyelination promotes recovery and limits neurodegeneration, but this is inefficient and always ultimately fails. Furthermore, these regenerated myelin sheaths are thinner and shorter than the original, leaving the underlying axons potentially vulnerable. In rodent models, CNS remyelination is more efficient, so that in young animals (but not old) the number of myelinated axons is efficiently restored to normal, but in both young and old rodents, regenerated myelin sheaths are still short and thin. The reasons for these differences in remyelination efficiency, the thinner remyelinated myelin sheaths compared to developmental myelin and the subsequent effect on the underlying axon are unclear. We studied CNS remyelination in the highly regenerative adult zebrafish, to better understand mechanisms of what we hypothesised would be highly efficient remyelination, and to identify differences to mammalian CNS remyelination, as larval zebrafish are increasingly used for high throughput screens to identify potential drug targets to improve myelination and remyelination.

Results We developed a novel method to induce a focal demyelinating lesion in adult zebrafish optic nerve with no discernible axonal damage, and describe the cellular changes over time. Remyelination is indeed efficient in both young and old adult zebrafish optic nerves, and at 4 weeks after demyelination, the number of myelinated axons is restored to normal, but internode lengths are short. However, unlike in rodents or in humans, in young zebrafish these regenerated myelin sheaths were of normal thickness, whereas in aged zebrafish, they were thin, and remained so even 3 months later. This inability to restore normal myelin thickness in remyelination with age was associated with a reduced macrophage/microglial response.
Conclusion Zebrafish are able to efficiently restore normal thickness myelin around optic nerve axons after demyelination, unlike in mammals. However, this fails with age, when only thin myelin is achieved. This gives us a novel model to try and dissect the mechanism for restoring myelin thickness in CNS remyelination. 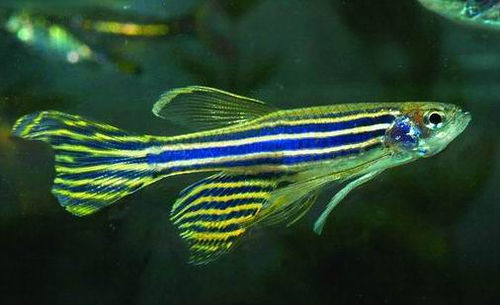 Further evidence that repair is reduced with aging