How lucky are you to be cared for under  the NHS? #MSBlog #MSResearch

“Not a week goes by without someone from the US emailing me about their MS and how to be treated. Some of the MSers are very wealthy and can make the trip to London to see a private MSologist; some can even afford to pay for alemtuzumab privately. However, the majority of the MSers who email me are uninsured and are having difficulty being treated. One MSer who had highly-active MS was able to get natalizumab free from Biogen-Idec, but couldn’t afford the $1200 per month to have the infusions. Not to mention the illegal immigrants with MS who live in California. It is heart-breaking stories like this that make me proud to work in the NHS, despite its problems. I therefore found the paper below interesting; it is a global report comparing the different healthcare systems of 11 nations. The report scores the healthcare systems according to a list of criteria. The NHS comes out on top and the US on the bottom. I wonder what this ranking would be like if we did the analysis based on MS care alone? I am sure the NHS wouldn’t come out on top. The EMSP MS barometer that ranks EU countries based on MS services alone places the UK close the bottom of the MS league table in Europe.”

“Is this report telling us that that socialist healthcare systems are superior? Many economists argue that inequity, in the presences of a political system that provides opportunity, is the engine that drives innovation and wealth creation and that this is what underpins the success of the US. Remove health inequity, by adopting socialist healthcare, and it is a slippery slope. This is all fine if you are young and healthy, but what happens when you get a chronic illness or get old? The debate about healthcare systems is worth having; it will hopefully make many British MSers realise how lucky they are to have the NHS. The NHS is also the ideal environment to drive change to improve outcomes for all MSers; not the lucky few. This is why we are trying to get MSologists in the UK to adopt treat-2-target of NEDA and to start looking beyond to preventing end-organ damage. We are also working on symptomatic issues and a whole raft of quality metrics to improve the outcome of MSers as a whole.” 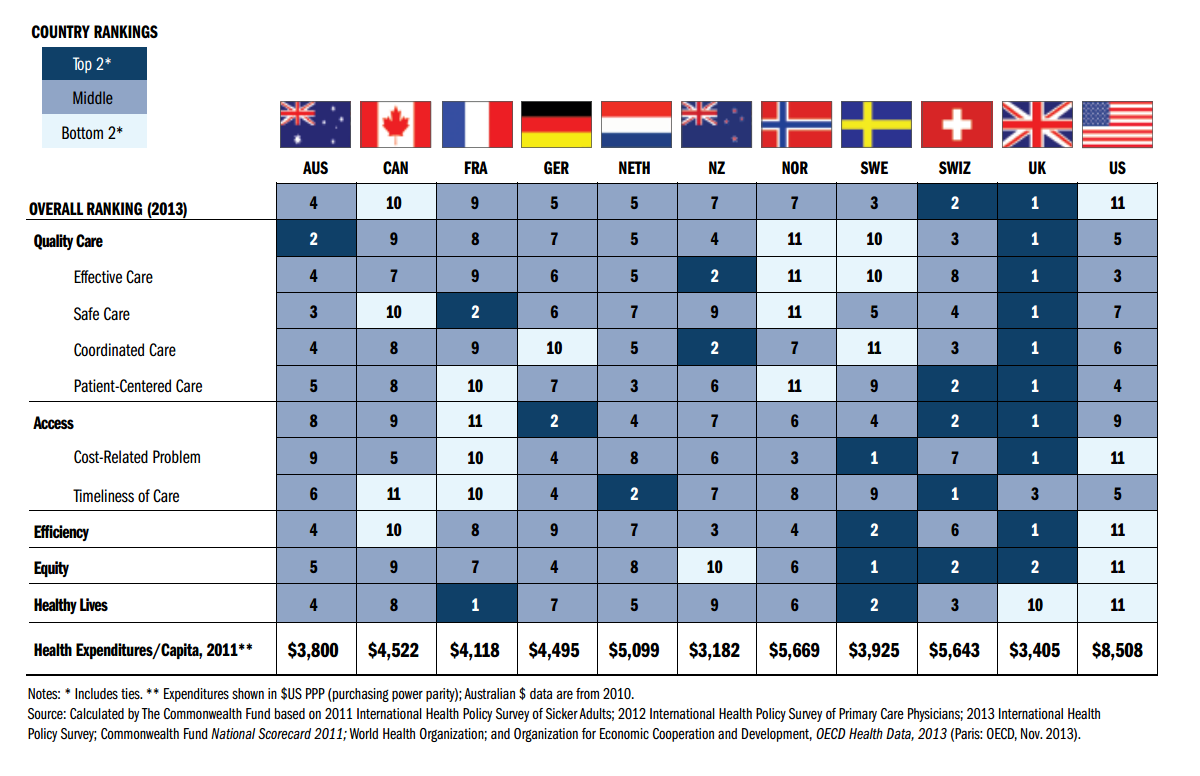 The United States health care system is the most expensive in the world, but comparative analyses consistently show the U.S. underperforms relative to other countries on most dimensions of performance. Among the 11 nations studied in this report—Australia, Canada, France, Germany, the Netherlands, New Zealand, Norway, Sweden, Switzerland, the United Kingdom, and the United States—the U.S. ranks last, as it did in prior editions of Mirror, Mirror. The United Kingdom ranks first, followed closely by Switzerland. Since the data in this study were collected, the U.S. has made significant strides adopting health information technology and undertaking payment and delivery system reforms spurred by the Affordable Care Act. Continued implementation of the law could further encourage more affordable access and more efficient organization and delivery of health care, and allow investment in preventive and population health measures that could improve the performance of the U.S. health care system.