IRX4204, a retinoid X receptor-agonist studied for prostate cancer, also promotes differentiation of oligodendrocytes and the formation of regulatory T cells and inhibits the formation of TH 17 cells in vitro, suggesting its potential for myelin repair in multiple sclerosis. In mouse models of MS, mice given IRX4204 had better EAE scores 13 days after treatment than those that were not given the drug. IRX4204 is highly specific to RXR and does not transactivate the retinoic acid receptors (RARs), avoiding some of the potential side effects associated with RAR agonists. 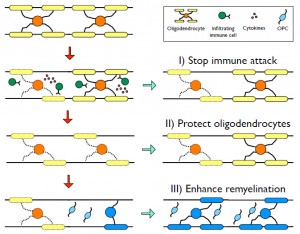 This is an extension of Robin Franklin’s groups finding that RXR receptor is expressed during remyelination. They also found that getting rid of RXR-gamma prevented oligodendrocyte multiplication in culture, showing that RXR is important in remyelination.

As a next step the Sanders group plan to test this in another animal model of remyelination to test whether the findings hold up. But if successful, there is no reason why they shouldn’t move ahead to a Phase II clinical trial in MS patients. It has already been found to be safe in patients with prostate cancer; so there is no need to carry out a Phase I safety study in humans (Hooray!).

PS: as it also reduces PSA levels, it may be a win win scenario for the men!