Liu W, Nair G, Vuolo L, Bakshi A, Massoud R, Reich DS, Jacobson S. In-Vivo imaging of spinal cord atrophy in neuroinflammatory diseases. Ann Neurol. 2014 Jul 4. doi: 10.1002/ana.24213. [Epub ahead of print]
Objective: Spinal cord atrophy is prominent in chronic progressive neurologic diseases such as Human-T-cell lymphotropic virus type-1 (HTLV-1) associated myelopathy/tropical spastic paraparesis (HAM/TSP) and multiple sclerosis (MS). Here we compared the spinal cord cross-sectional area (SCCSA) in HAM/TSP and MS to that of healthy volunteers (HV).
Methods: SCCSA and clinical disability scores were measured in 18 HAM/TSP, 4 asymptomatic carriers (AC) of HTLV-1, 18 MS, and 10 HV from a 3T MRI. SCCSA measured in patients and AC were compared to that of HV and correlated with disability scores. Results: The entire spinal cord in HAM/TSP was thin compared to HV, whereas only the cervical cord in MS was thinner than HV (p= 0·0001). In HAM/TSP, SCCSA extensively correlated with Ambulation Index, whereas only the cervical cord correlated with disease duration (p= 0·05). In MS, the SCCSA extensively correlated with Scripps Neurologic Rating Score and the Expanded Disability Status Scale (p= 0·05). One of the four ACs showed atrophy in a pattern similar to HAM/TSP.
Interpretation: These results are in accordance with the findings that whereas over half of all lesions in an MS cord are seen in the upper cervical cord, most of the pathology in HAM/TSP is seen in the thoracolumbar cord, which in turn may be responsible for more extensive cord atrophy seen in HAM/TSP.  An imaging marker such as SCCSA might serve as a surrogate endpoint in clinical trials, especially to assess the neuroprotective impact of various therapies. 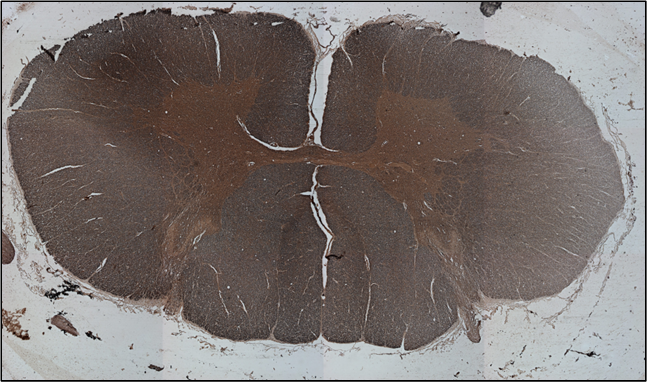 It’s not straightforward to interpret these findings as the cohort was relatively small, and assumptions from MRI measures about what is happening in the tissue are notoriously not more than that: assumptions.


One likes to think of nerve fibres (axons) connecting the brain with nerve cells in the spinal cord as ‘cables’, and once fibre-damage occurs in MS, these fibres are removed and thus can no longer contribute to the overall diameter of the spinal cord leading – theoretically – to volume loss (= atrophy).


However, atrophy can be compensated for by other cellular changes, including inflammation and astrocyte activation, confounding the use of atrophy as a direct correlate of ‘nerve fibre loss’.


It becomes even more twisted when, as has been repeatedly reported, lesions in the spinal cord have very little association with the underlying nerve fibre loss, which seems to occur almost independently of spinal cord lesions, at least in later stages of MS.