I was close to the red light district in Amsterdam (at a Post PhD viva dinner-I may add), when I got this email from MD2 about “perhaps the most bizarre post I’ve ever seen”. Whilst I do not usually report on the “cure of the week” about what can stop EAE from developing, this is certainly going to take the biscuit.

We’ve had the inference of resveratol stopping EAE, which may make you have a glass of red wine or some blueberries (until you realise that the amount of resveratol in blueberries/wine is miniscule compared to the dose to stop EAE…but wrap the study up in a plausible mechanism and Bobs your uncle), but where is this current study going to have us all going?…..I shudder to think. No comments please.


Is this the Next CCSVI craze you don’t need a neuro to get it…and some unscruplious people could make money from it….So sounds familiar:-)

Previous studies have shown that insemination elicits the expansion of the natural FoxP3+ regulatory T cell (Treg) pool in female reproductive tissue during mating. Further research demonstrated that this effect was due to seminal vesicle fluid. Indeed, seminal vesicle fluid causes differential recruitment of Tregs into different organs. The recruitment of Tregs into the brain occurs at the lowest rate of all studied organs. In addition, Tregs are present at a lower frequency and/or have a reduced function in multiple sclerosis. These observations prompted us to investigate how intra-CSF administration of seminal vesicle fluid affects experimental autoimmune encephalomyelitis (EAE), an animal model of multiple sclerosis. Our results suggest that seminal vesicle fluid contains all of the ligands required to activate the Treg pool and exhibits an anti-inflammatory effect on organs outside the reproductive system. 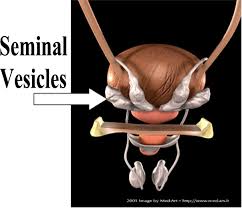 If you are going to have a treatment of EAE these days any self-respecting paper usually has a “flavour of the time” as the mechanism of action.


You need enough T regulatory cells to conceive and T regs can block autoimmunity and are part of mum’s immune machinery that blocks mum rejecting dads bits in the unborn. Maybe this approach has mileage. Wonder if we would get a grant to test this hypothesis:-)

The paper says……inject seminal fluid in the brain….?….This is what the authors did and EAE was inhibited. This is my most interesting “cure of the week”

So why brain injection and what is the translational route to this approach? Answers on the back of a postcard…but please don’t tell me 🙂


Where did the seminal fluid come from?.


It reminds me of a time in the Lab with MD2 when we were looking for a symptomatic treatment and as side effect of one drug we got covered, it was if we had given the beasties a Lad’s Mag….maybe we should have published this too.