Despite the mixed reception on my previous post on MS Role Models I’m going to brave the storm and talk about another inspiring MSer – Ann Romney.


Ann Romney is the wife of Mitt Romney the Republican nominee in the 2012 US Presidential election. Wherever your political leanings lie, try to stay with me!


Ann Romney was diagnosed with relapsitting-remitting MS in 1998 following an episode of numbness in her leg. She began to be treated with steroids but gave up on conventional medicine in favor of alternative therapies such as acupuncture and reflexology. Another one of these is ‘equestrianism’!! She has had occasional relapses since her diagnosis but credits alternative therapies as the main source of her remission. 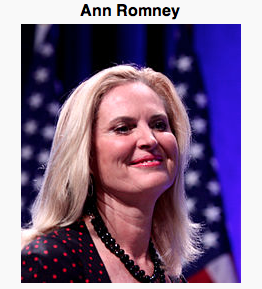 “I decided I was very comfortable with my MS. Everybody has problems. Everyone has issues. And this happens to be a surprise thing that came in my life, and I didn’t count on. Everywhere I go people come up to me, they mob me — anyone who has MS or has a relative with MS — they come up and hug and cry. I don’t care what somebody else thinks about it. I know for certain people I’m championing a struggle that they’re going through.”


“There are certain things that don’t mix well with MS. One is staying up late at night. Another is big, noisy crowds.”


Have a look at this video of Ann Romney talking about her experiences with MS.


I will post in the next few days about the potential role of acupuncture in MS as it seems to be a recurring theme. ..