Among other clinical manifestations, sexual dysfunction (SD) is a painful but still underreported and underdiagnosed symptom of the disorder. SD in MS patients may result from a complex set of conditions and may be associated with multiple anatomic, physiologic, biologic, medical and psychological factors. SD arises primarily from lesions affecting the neural pathways involved in physiologic function. In addition, psychological factors, the side effects of medications and physical symptoms such as fatigue, muscular weakness, menstrual changes, pain and concerns about bladder and bowel incontinence may also be involved. Since MS primarily affects young people, SD secondary to MS may have a great impact on quality of life.

Figure: SD in MS patients can be owing to lesions affecting the neural pathways that are involved in physiologic function, among which the HPA axis and the HPG axis might be compromised. Psychological factors such as depression, side effects of medications and physical symptoms including fatigue and muscular weakness may contribute to the pathogenesis of SD in MS. (−) denotes compromising effects. HPA, hypothalamic–pituitary–adrenal; HPG, hypothalamic–pituitary–gonadal; MS, multiple sclerosis; SD, sexual dysfunction.

Any mention of sex, sexual dysfunction is sure fire way to kill a conversation, it’s also very ‘British’ to skirt around personal and taboo subjects! However, as the topic featured one too many times in my clinic this week, I felt it was time to take another look at this…

MS like other chronic medical conditions is frequently associated with SD. Around 40-74% of female MSers report SD; most frequently due to a reduced drive, difficulty in orgasming, reduced sensation in the genital area and vaginal dryness leading to pain during intercourse. Whilst, men commonly report erectile dysfunction (50-75%), followed by ejaculatory dysfunction/ difficulty orgasming and reduced drive.

The causes are not well known, but largely multifactorial (refer to above figure). It is not only due to MS lesions affecting the neural pathways involved in sexual function, but also psychological factors, medication related (around 30-60% on SSRI anti-depressants have related SD), tiredness, muscle weakness, pain, and concerns over bladder/bowel incontinence etc.

Researchers have found an increase in the levels of the stress hormone cortisol in MSers, suggesting hyperactivity of the HPA axis (H=hypothalamus is the main link between the nervous and hormonal system, and is involved in a myriad of functions including the regulation of appetite, sleep-wake cycle, immune system, sexuality, mood etc.).

While, the interruption of the HPG axis affects sex hormone production and reproductive function. We know that relapse activity in female MSers is related to sex hormones – low progesterone at the start of menstruation is associated with frequent relapses or worsening symptoms, whilst the relapse rate reduces during the last three months of pregnancy owing to increased oestrogen and progesterone levels, which later increases again in the three months post delivery as the hormones drop off. In male MSers low blood testosterone levels is associated with erectile dysfunction, diminished drive and potentially lowered sperm count. 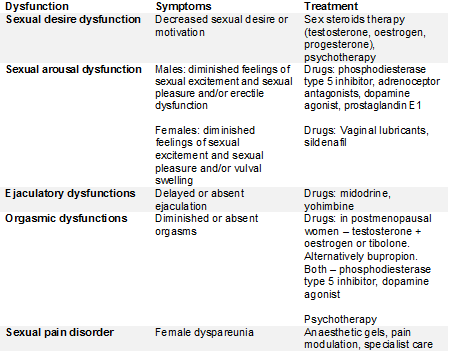 The first-line for male SD are phosphodiesterase type 5 inhibitors (sildenafil = Viagra, Vardenafil = Levitra, Tadalafil = Cialis) which increase cyclic guanosine monophosphate levels (cGMP) leading to smooth muscle relaxation and increased inflow of blood. Other vasoactive agents (drugs which increase the calibre of blood vessels) such as prostoglandin E1 (Caverject, Viridal) also induce erections through smooth muscle relaxation can also be used. Dopamine agonists, such as apomorphine act in the central nervous system with an affinity for D2 brain receptors known to be involved in sexual function can be used in either sex. Replacement of sex hormones (oestrogen and progesterone) in those with low levels may also be another therapeutic option in SD. Alternatively, psychotherapy and counselling when done correctly can result in marked improvements in SD.

Overall, SD in MS is complex and requires a multifactorial approach. In men at least there appears to be several directly acting oral drugs, but in women hormonal therapy and psychotherapy may be the way to go.