Children with MS have smaller brains. Why? Are you surprised? #MSBlog #MSResearch

“The study below is very sobering and another reminder how devastating MS can be if left to its own devices. Children with MS have smaller brains as a result of a reduction in the rate of brain growth compared to age-matched controls. This indicates that MS is stunting the neuro-development of children with MS. This same phenomenon occurs in adults, but as the adult brain is mature we see a increased rate of brain atrophy or volume loss due to MS. This is another reason why we need to treat this condition as early as possible and actively as possible; zero tolerance with a therapeutic aim of no evident disease activity (NEDA) and to maximise the preservation of the end-organ (brain volume). In the past I have used  the shredding analogy to describe the effects of inflammation on the brains of MSers. I think this term capture very graphically what happens to the brains of MSers. I did not coin the term it came from the script of The West Wing, the popular TV series.”

Abbey Bartlet: We had a deal!


President Josiah “Jed” Bartlet: Yes, we had a deal.


Abbey Bartlet: Yes, but relapsing-remitting M.S. can turn into secondary-progressive M.S. oftentimes ten years after the initial diagnosis which is exactly where we’ll be in two years! Do you know what that’s going to look like if it happens?

“When I had push back on using the term shredding, or shredder, I ran a survey and was surprised that the community supported use of the term. Do you agree? I have reopened the survey at the end of this post; please have your say.” 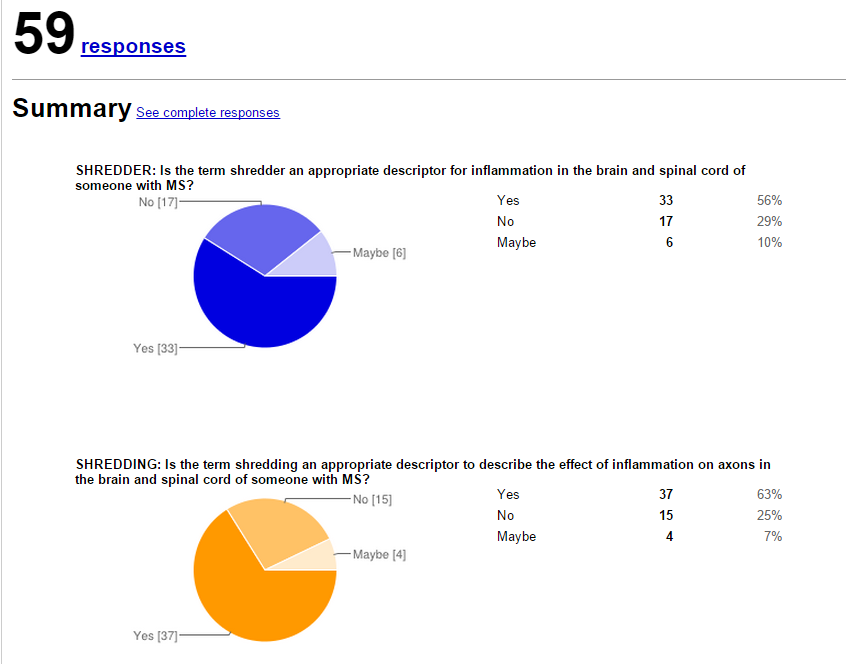 “Please note that sometimes you have to be cruel to be kind. To get neurologists to treat MS actively you need ways to make them see how bad MS can be. I think the shredder analogy does just that. You may want to read my earlier post about the pathology of MS to see why the term shredder is so appropriate.”


METHODS: Whole brain and regional volumes of 36 RRMSers onset prior to 18 years of age were segmented in 185 longitudinal MRI scans (2-11 scans per participant, 3-month to 2-year scan intervals). MRI scans of 25 age- and sex-matched healthy normal controls (NC) were also acquired at baseline and 2 years later on the same scanner as the MS group. A total of 874 scans from 339 participants from the NIH-funded MRI study of normal brain development acquired at 2-year intervals were used as an age-expected healthy growth reference. All data were analyzed with an automatic image processing pipeline to estimate the volume of brain and brain substructures. Mixed-effect models were built using age, sex, and group as fixed effects.


RESULTS: Significant group and age interactions were found with the adjusted models fitting brain volumes and normalized thalamus volumes (p < 10-4). These findings indicate a failure of age-normative brain growth for the MS group, and an even greater failure of thalamic growth. In MSers, T2 lesion volume correlated with a greater reduction in age-expected thalamic volume. To exclude any scanner-related influence on our data, we confirmed no significant interaction of group in the adjusted models between the NC and NIH MRI Study of Normal Brain Development groups.


CONCLUSIONS: Our results provide evidence that the onset of MS during childhood and adolescence limits age-expected primary brain growth and leads to subsequent brain atrophy, implicating an early onset of the neurodegenerative aspect of MS.