BACKGROUND AND OBJECTIVE:The long term effects of fingolimod, an oral treatment for relapsing-remitting (RR) multiple sclerosis (MS), on blood circulating B and T cell subtypes in MS patients are not completely understood. This study describes for the first time the longitudinal effects of fingolimod treatment on B and T cell subtypes. Furthermore, expression of surface molecules involved in antigen presentation and costimulation during fingolimod treatment are assessed in MS patients in a 12 month follow-up study.
METHODS: Using flow cytometry, B and T cell subtypes, and their expression of antigen presentation, costimulation and migration markers were measured during a 12 month follow-up in the peripheral blood of MS patients. Data of fingolimod-treated MS patients (n = 49) were compared to those from treatment-naive (n = 47) and interferon-treated (n = 27) MS patients.
RESULTS:  In the B cell population, we observed a decrease in the proportion of non class-switched and class-switched memory B cells (p<0.001), both implicated in MS pathogenesis, while the proportion of naive B cells was increased during fingolimod treatment in the peripheral blood (PB) of MS patients (p<0.05). The remaining T cell population, in contrast, showed elevated proportions of memory conventional and regulatory T cells (p<0.01) and declined proportions of naive conventional and regulatory cells (p<0.05). These naive T cell subtypes are main drivers of MS pathogenesis. B cell expression of CD80 and CD86 and programmed death (PD) -1 expression on circulating follicular helper T cells was increased during fingolimod follow-up (p<0.05) pointing to a potentially compensatory mechanism of the remaining circulating lymphocyte subtypes that could provide additional help during normal immune responses.
CONCLUSIONS:  MS patients treated with fingolimod showed a change in PB lymphocyte subtype proportions and expression of functional molecules on T and B cells, suggesting an association with the therapeutic efficacy of fingolimod. 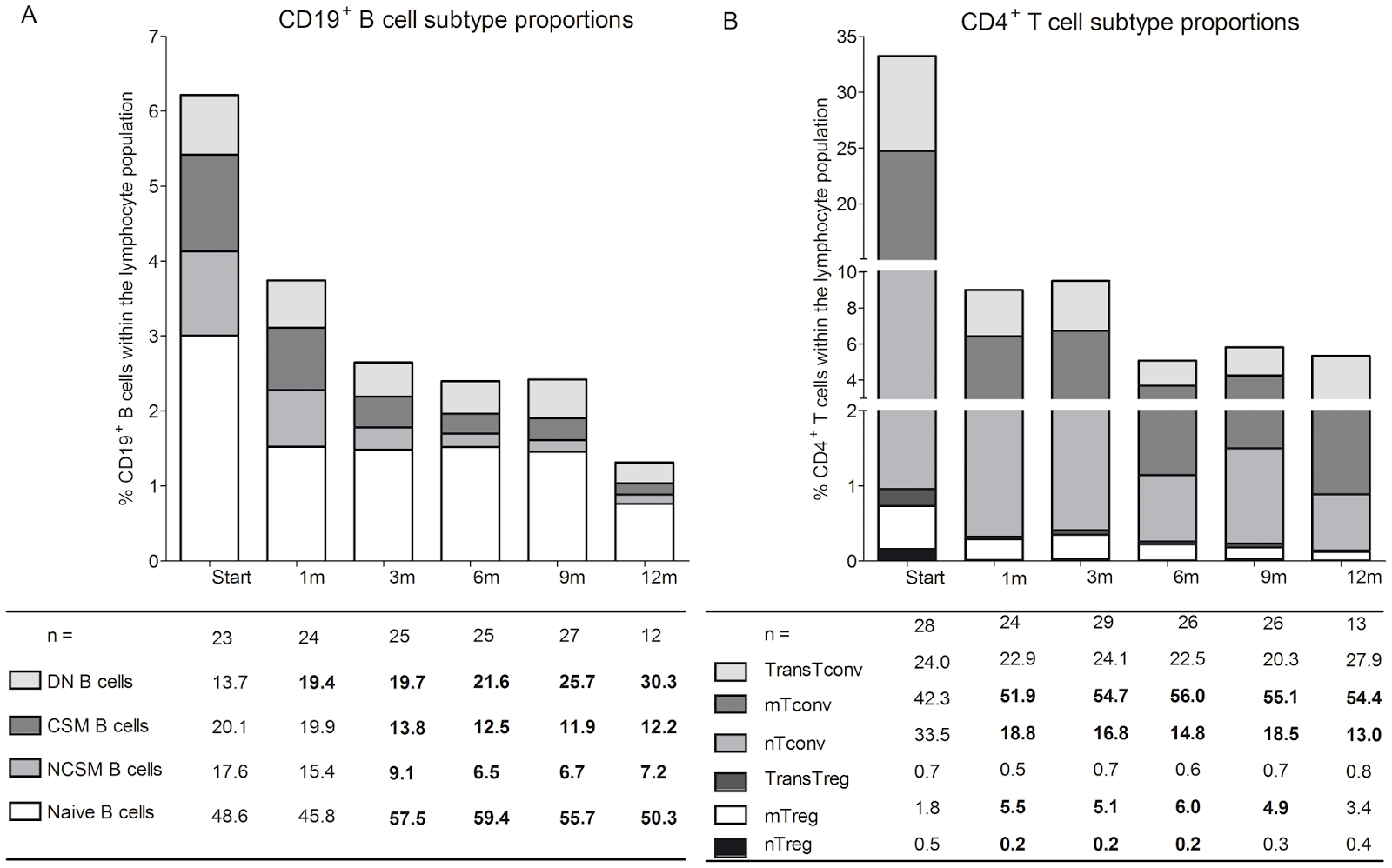 Immunology101 suggests that naive (CD45RA+) cells become activated to become conventional (conv) memory cells (CD45RA-, CD45RO+) and it is the CD45RO+ cell subset that causes diseasse. In this study they show that Gilenya results in a decrease in the CD45RA+ subset of T cells and then state that these are the cells drive autoimmunity….em. Novartis101 suggests that naive and central memory T cells get caught in lymph glands but effector cells escape. Whilst we know from animal studies that this setup blocks T cell driven autoimmune disease in animals.
However what is evident, is that the main effect is a depletion from the blood of the CD27+, CD19+ memory B cells. Drugs that stop relapsing MS (Alemtuzumab, mitoxantrone, anti-CD20) are potent B cell inhibitors. Is it really the T cell that drives relapsing MS, or is it the B cell?