BACKGROUND:Fingolimod inhibits lymphocyte egress from lymphoid tissues, thus altering the composition of the peripheral lymphocyte pool ofmultiple sclerosis patients.
OBJECTIVE:The objective of this paper is to evaluate whether fingolimod determines a decrease of newly produced T- and B-lymphocytes in the blood and a reduction in the T-cell receptor repertoire diversity that may affect immune surveillance.
METHODS:Blood samples were obtained from multiple sclerosis patients before fingolimod therapy initiation and then after six and 12 months. Newly produced T and B lymphocytes were measured by quantifying T-cell receptor excision circles and K-deleting recombination excision circles by real-time PCR, while recent thymic emigrants, naive CD8+ lymphocytes, immature and naive B cells were determined by immune phenotyping. T-cell receptor repertoire was analyzed by complementarity determining region 3 spectratyping.
RESULTS:Newly produced T and B lymphocytes were significantly reduced in peripheral blood of fingolimod-treated patients. The decrease was particularly evident in the T-cell compartment. T-cell repertoire restrictions, already present before therapy, significantly increased after 12 months of treatment.
CONCLUSIONS: These results do not have direct clinical implications but they may be useful for further understanding the mode of action of this immunotherapy for multiple sclerosis patients. 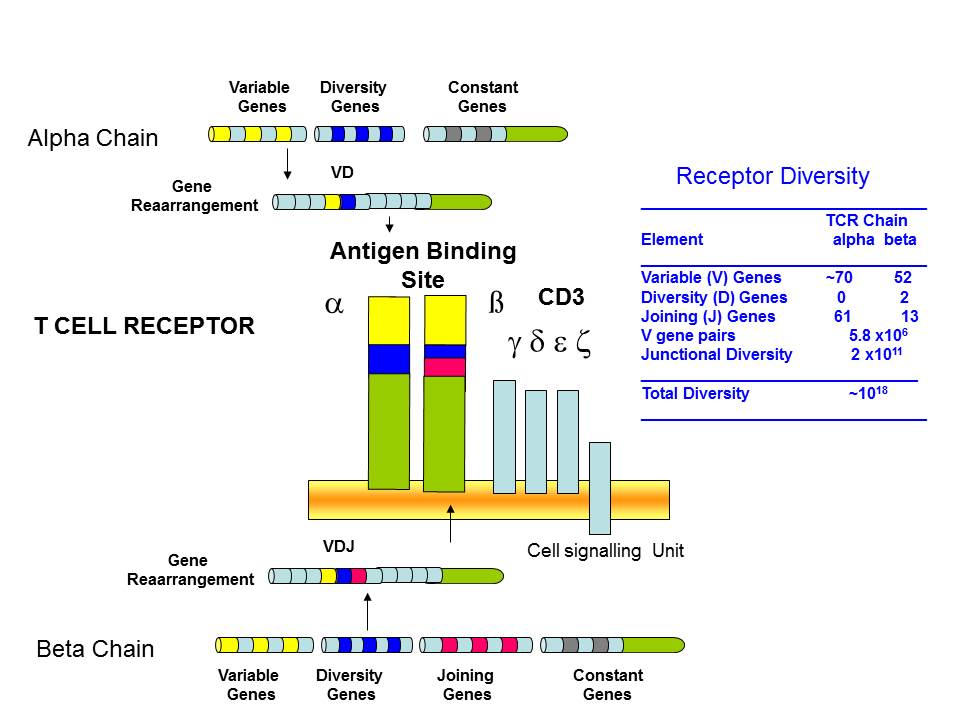 T cells recognise their targets using the T cell receptor, This repertoire determines what you can recognise, whether this is a pathogen or a self protein, In this study they assessed receptor diversity before and after fingolimod and it was found to go down following treatment with Gilenya. The alpha and beta chains of the T cell receptor is formed in the thymus buut splicing gene products together and when they do this TRECS are formed. During TCR rearrangement processes, unused excised DNA fragments create byproducts termed TCR excision circles (TRECs). They could detect what the T cell receptors were by typing them (Spectratyping). They also looked a the phenotypes of the cells to workout if they were newly formed and immature. In this study they report that gilenya reduced the repertoire, this would be expected as it blocks naive cells from leaving lymph glands. With a reduced repertoire available it means less potential to react to new targets maybe in the CNS but also to react to infectious agents.