Multiple sclerosis
(MS) is an autoimmune inflammatory demyelinating disease of the central
nervous system. At present, the molecular mechanisms causing the
initiation, development and progression of MS are poorly understood, and
no reliable proteinaceous disease markers are available. In this study,
we used an immunoproteomics approach to identify autoreactive
antibodies in the cerebrospinal fluid of MS patients to use as candidate
markers with potential diagnostic value. We identified an autoreactive
anti-transferrin antibody that may have a potential link with the
development and progression of MS. We found this antibody at high levels
also in the serum of MS patients and created an immunoenzymatic assay
to detect it. Because of the complexity and heterogeneity of multiple sclerosis,
it is difficult to find a single marker for all of the processes
involved in the origin and progression of the disease, so the
development of a panel of biomarkers is desirable, and anti-transferrin
antibody could be one of these. 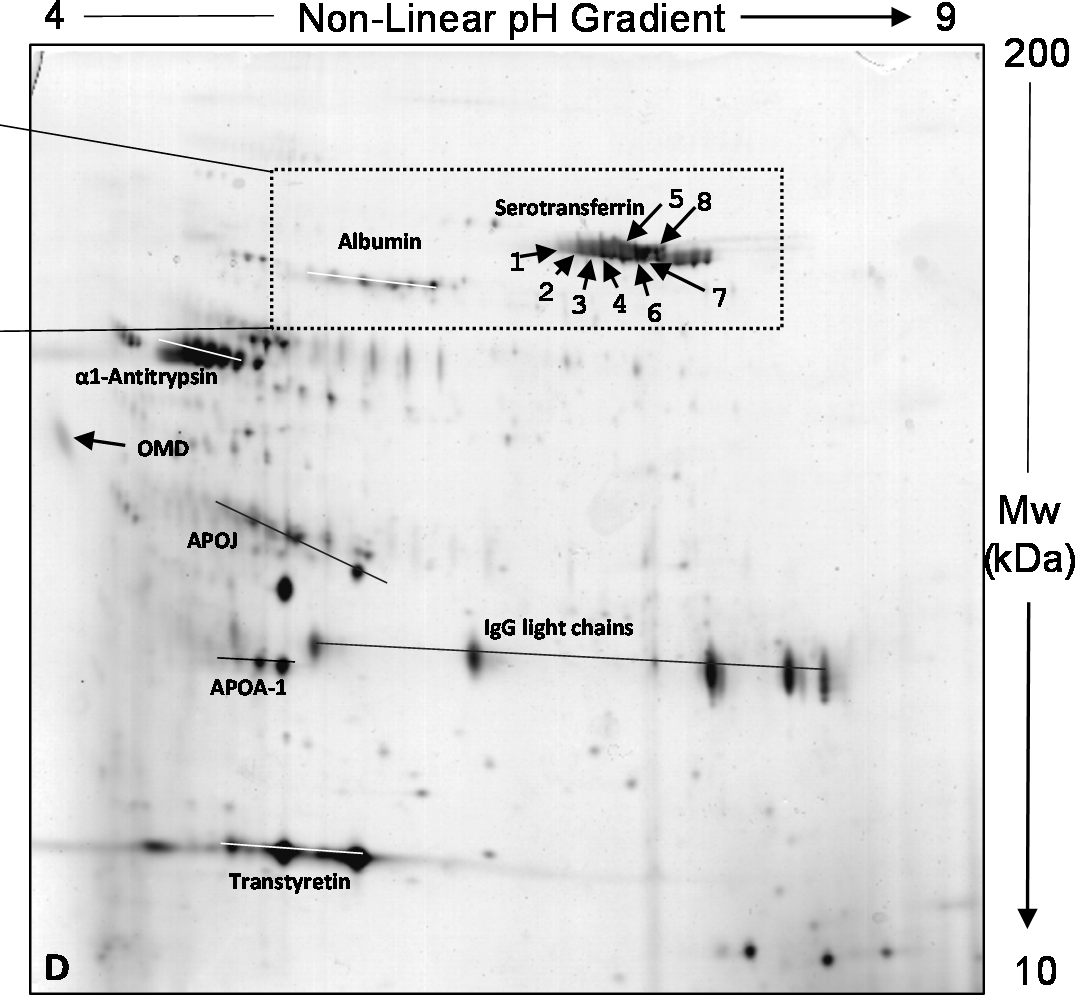 2D-proteomic map of MS CSF
There will always great interest in the immune-mediated cause of MS; oligoclonal IgG (OCB) is probably one of the better known ones. But the available technology to study these have exceeded even our capacity to understand the final results.
You may say ‘International Journal of Molecular Science’, is not a very high impact journal. But the experimental design is interesting to say the least. As with most discovery platforms (in this case proteomics, aka the study of proteins, is one such platform), it is an unbiased study of patterns in a disease. However, interestingly the original base on which you probe using the patient’s blood and CSF is also pooled CSF from patients in the first place (see picture above which represents the proteins present in this CSF) – this then becomes a fishing expedition looking for anything which reacts. The end result was that the investigators found a directed autoantibody response to transferrin in blood and CSF of MS patients.
Now, transferrin binds iron in your body. It is responsible for most of the iron delivery in the body, including the brain. Iron is an important factor in energy production and used by brain cells for processes such as growing and dividing, through to nerve transmission. Accumulation of iron has also been noted in a number of neurological disorders and felt to contribute to the abnormal processes taking place in them, in particular neurodegeneration (the process which leads to progression and disability). It is possible that this change in iron load may be directly related to the to and fro delivery of iron from the brain.
This finding maybe something or nothing at all…