Monoclonal antibodies (mAbs) play an increasing important role in the therapeutic armamentarium against multiple sclerosis (MS), an inflammatory and degenerative disorder of the central nervous system. Most of the mAbs currently developed for MS are immunomodulators blocking the inflammatory immune process. In contrast with mAbs targeting immune function, GNbAC1, a humanized IgG4 mAb, targets the multiple sclerosis associated retrovirus envelope (MSRV-Env) protein, an upstream factor in the pathophysiology of MS. MSRV-Env protein is of endogenous retroviral origin, expressed in MS brain lesions, and it is pro-inflammatory and toxic to the remyelination process, by preventing the differentiation of oligodendrocyte precursor cells. We present the preclinical and early clinical development results of GNbAC1. The specificity of GNbAC1 for its endogenous retroviral target is described. Efficacy of different mAb versions of GNbAC1 were assessed in MSRV-Env induced experimental allergic encephalitis (EAE), an animal model of MS. Because the target MSRV-Env is not expressed in animals, no relevant animal model exists for a proper in vivo toxicological program. An off-target (bind to things other than the intended target i.e. the viral epitope) 2-week toxicity study in mice was thus performed, and it showed an absence of safety risk. Additional in vitro analyses showed an absence of complement or antibody-dependent cytotoxicity as well as a low level of cross-reactivity to human tissues. The first-in-man clinical study in 33 healthy subjects and a long-term clinical study in 10 MS patients showed that GNbAC1 is well tolerated in humans without induction of immunogenicity and that it induces a pharmacodynamic response on MSRV biomarkers. These initial results suggest that the mAb GNbAC1 could be a safe long-term treatment for patients with MS with a unique therapeutic mechanism of action. 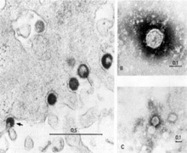 At the heart of the Charcot project, dealing with viruses is a central aim. However, TeamG have competition and this group from France has started trials in MS too. Rather than using drugs they aim to use antibodies. In the blood stream this will be be no problem however if they need to get the antibody into the brain, this is a more difficult task. In this project they are targeting human endogenous retro virus. These are present in the genome of every body and every cell, but they may be transactivated following EBV infection. This approach appears to be safe to the next stage is to show it works

Short summary
A retrovirus is an enveloped viruse that replicate in a host cell through the process of reverse transcription. Thus it is an RNA virus that stores its nucleic acid in the form of an mRNA genome and requires a cell to replicate. Once inside the cell cytoplasm, the virus uses its own reverse transcriptase enzyme to produce DNA from its RNA genome, the reverse of the usual pattern of making RNA from DNA, thus retro (backwards). This new DNA is then incorporated into the host cell genome by an integrase enzyme, at which point the retroviral DNA is referred to as a provirus. The host cell then treats the viral DNA as part of its own genome, translating and transcribing the viral genes along with the cell’s own genes, producing the proteins required to assemble new copies of the virus. Some of these retrovirus have become part of human DNA and these are called endogenous (within) retrovirus and as they infect human cells are called human endogenous retrovirus or HERV. They are present in every cell and lie dormant but it has been found that in some cases these viruses can become activated to produce virus particles and this has been associated with active MS. In some cases it looks like Epstein Bar virus can assist in the development of this Process. These could be the target for inflammation in MS,

Many viruses have viral envelopes covering their protective protein capsids (Shell of the virus) containing the viral RNA. The envelopes typically are derived from portions of the host cell membranes (phospholipids and proteins), but include some viral glycoproteins. Functionally, viral envelopes are essential to entry into host cells. They may help viruses avoid the host immune system.  In this case when the retrovirus is produced in the brain it has the function of stopping myelin-forming cells from repairing demyelination.

In this study they have made an antibody against the viral envelope and called it GNbAC1. The viral binding bit of the antibody is derived from and animal and the rest is of human origin so that it will not be rejected and because it is IgG4, it will not activate complement (enzyme cascade that puts holes in the target) and did not activate cell dependent cellular cytotoxicity, which means that the antibody was not bound to the Fc receptors (antibody tail) to stimulate attack by phagocytes (macrophages and neutrophils), So it was not bind to and kill infected cells but will mop-up and neutralise viral particles. They tested to see if this would cause problems in mice and it didn’t although the Human immunoglobulin bit would have caused the mouse immune system to react to it and remove it. It was injected into humans and was safe and appeared to influence markers of infection, suggesting it is dealing with the infection.