The protective and therapeutic mechanism of bee venom acupuncture (BVA) in neurodegenerative disorders is not clear. We investigated whether treatment with BVA (0.25 and 0.8 mg/kg) at the Zusanli (ST36) acupoints, located lateral from the anterior border of the tibia, has a beneficial effect in a myelin basic protein (MBP)68-82-induced acute experimental autoimmune encephalomyelitis (EAE) rat model. Pretreatment (every 3 days from 1 h before immunization) with BVA was more effective than posttreatment (daily after immunization) with BVA with respect to clinical signs (neurological impairment and loss of body weight) of acute EAE rats. Treatment with BVA at the ST36 acupoint in normal rats did not induce the clinical signs. Pretreatment with BVA suppressed demyelination, glial activation, expression of cytokines [interferon (IFN)-γ, IL-17, IL-17A, tumor necrosis factor-alpha (TNF-α), and IL-1β], chemokines [RANTES, monocyte chemotactic protein-1 (MCP-1), and macrophage inflammatory protein (MIP)-1α], and inducible nitric oxide synthase (iNOS), and activation of p38 mitogen-activated protein kinase (MAPK) and nuclear factor (NF)-κB (p65 and phospho-IκBα) signaling pathways in the spinal cord of acute EAE rats. Pretreatment with BVA decreased the number of CD4+, CD4+/IFN-γ+, and CD4+/IL-17+ T cells, but increased the number of CD4+/Foxp3+ T cells in the spinal cord and lymph nodes of acute EAE rats. Treatment with BVA at six placebo acupoints (SP9, GB39, and four non-acupoints) did not have a positive effect in acute EAE rats. Interestingly, onset and post-treatment with BVA at the ST36 acupoint markedly attenuated neurological impairment in myelin oligodendrocyte glycoprotein (MOG)35-55-induced chronic EAE mice compared to treatment with BVA at six placebo acupoints. Our findings strongly suggest that treatment with BVA with ST36 acupoint could delay or attenuate the development and progression of EAE by upregulating regulatory T cells and suppressing T-helper (Th) 17 and Th1 responses. 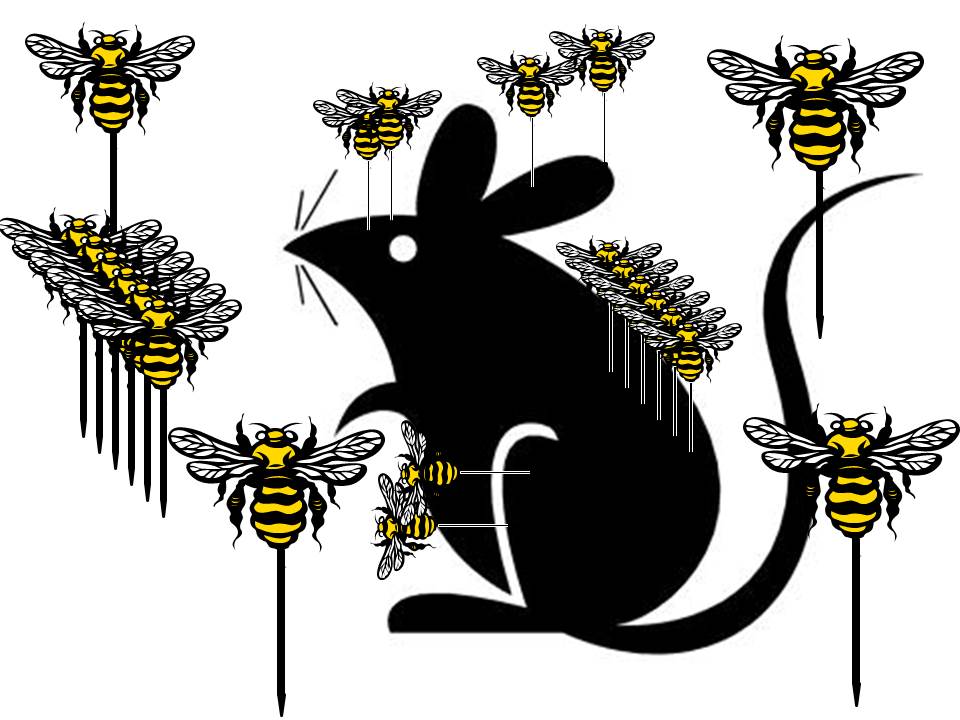 Bee sting therapy is something that some of you may know about, how does it work?

Does it work? is the first question.

In this study they injected bee venon into the shin, If you do it before sensitisation it works better than after…so you should have bee venom therapy before you get MS?

It was found that animals got less disease.So they don’t have infiltrates  cytokines or other stuff  in the spinal cord as expected and it increases Treg cells.

Is this a stress effect after all we know bee venon can be painful  or is it real? The question is what do you use Bee venom therapy as a Disease modifying treatment or as a symptomatic treatment. If this is the latter then the current has no logical correlate to how it is used in MS .

Bee stings were tried as a DMT and failed, although with only 26 people in the study could it do anything else but fail?

BACKGROUND:Bee sting therapy is increasingly used to treat patients with multiple sclerosis (MS) in the belief that it can stabilize or ameliorate the disease. However, there are no clinical studies to justify its use.
METHODS:In a randomized, crossover study, we assigned 26 patients with relapsing-remitting or relapsing secondary progressive MS to 24 weeks of medically supervised bee sting therapy or 24 weeks of no treatment. Live bees (up to a maximum of 20) were used to administer bee venom three times per week. The primary outcome was the cumulative number of new gadolinium-enhancing lesions on T1-weighted MRI of the brain. Secondary outcomes were lesion load on T2*-weighted MRI, relapse rate, disability (Expanded Disability Status Scale, Multiple Sclerosis Functional Composite, Guy’s Neurologic Disability Scale), fatigue (Abbreviated Fatigue Questionnaire, Fatigue Impact Scale), and health-related quality of life (Medical Outcomes Study 36-Item Short Form General Health Survey).
RESULTS: During bee sting therapy, there was no significant reduction in the cumulative number of new gadolinium-enhancing lesions. The T2*-weighted lesion load further progressed, and there was no significant reduction in relapse rate. There was no improvement of disability, fatigue, and quality of life. Bee sting therapy was well tolerated, and there were no serious adverse events.
CONCLUSIONS: In this trial, treatment with bee venom in patients with relapsing multiple sclerosis did not reduce disease activity, disability, or fatigue and did not improve quality of life.

DrK was recently in China and it was evident that there is poor access to pharmaceutical DMT for ChineseMSers.