Natalizumab vs. Alemtuzumab: effects on B cells in the brain and spinal cord are different. #MSBlog #MSResearch


“Natalizumab vs. alemtuzumab: yesterday someone asked the question about why would anyone choose natalizumab over alemtuzumab? I have posted on this topic before and it essentially comes down to choice; a philosophical question about a treatment strategy.”


“A large number of MSers have been pinning their hopes that these highly effective therapies may work in progressive MS. The answer is we don’t know. Why? Alemtuzumab was tried in relapsing SPMS and although it stopped relapses the majority of MSers continued to progress. Whether they progressed at a slower rate, or whether or not their progression would have plateaued out after several years is not known (therapeutic lag). To answer these questions we need to a randomised controlled trial and compare alemtuzumab to placebo, or active comparator, to find out. I have hypothesised before that I think we need to do SPMS trials differently using neuronal subsystems not in the clinical progressive phase as the primary outcome; this latter is based on the asynchronous progressive MS hypothesis. Doing this may increase the chances of SP & PPMS trials being positive.”


“What about natalizumab in SPMS? We don’t know. But there is a clinical trial running at presenting assessing whether or not natalizumab is effective or in SPMS. This is called the ASCEND Trial. I have concerns that this trial may not be long enough, but as natalizumab is one of the most effective DMTs we have I may be proved wrong. What natalizumab has on its side is that it may impact on the B cells biology within the brain and spinal cord. Almost all MSers have oligoclonal IgG bands (OCBs) in their spinal fluid. These bands indicate that there are clones of B cells and plasma cells (immunoglobulin factories) in the brain and spinal cord. Several studies have shown that the presence of OCBs predicts a poorer outcome and the presence of the so called B cell follicles that make these antibodies on the surface of the brain are associated with progressive MS and a poorer outcome. A large number of people in the field think that B-cells are one of the main drivers of progressive MS. The small studies below suggests natalizumab impacts on B cell biology in MS; a proportion of MSers on natalizumab lose their OCBs and there is a drop in number of IgG and B cells in the spinal fluid when MSers are treated with natalizumab. The loss of OCBs does not happen with alemtuzumab. Why? I suspect because alemtuzumab does not stop T-cell trafficking into the brain and spinal cord. These B cell follicles need T cell help to survive; T cell produce a cocktail of growth factors or fertilizer that the B cell follicles need to maintain their structure. Stop providing the B cell follicles with fertilizer and they regress. The studies below are very small and need to be repeated, but they provide a tantalizing hint that there are major differences between how alemtuzumab and natalizumab work; this may be important for progressive MS.”
“What next? I think we need to repeat the natalizumab spinal fluid studies and in parallel do similar studies on alemtuzumab-treated subjects. We need to lobby Genzyme to do a properly powered study to assess alemtuzumab in SPMS. I think if we are clever about the trial design the study could be positive. This is why I am trying to put a consortium together to study the asynchronous progressive MS hypothesis.” 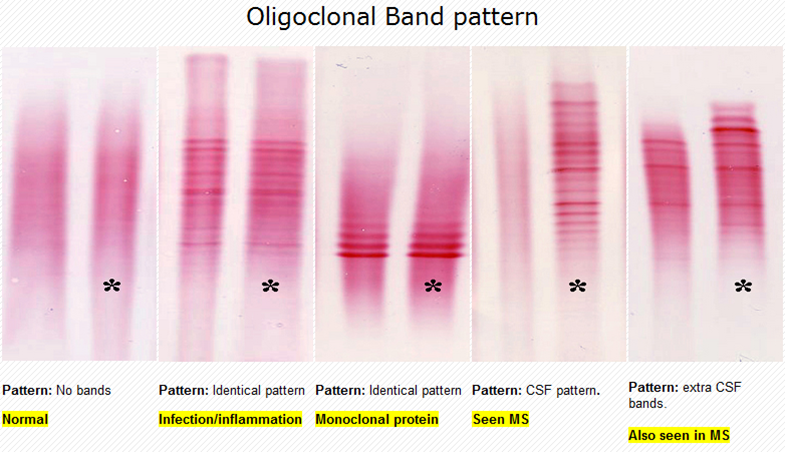 Background: Intrathecal immunoglobulin synthesis in an oligoclonal pattern is the most common immunologic abnormality detected in MSers. Various treatments, such as immunomodulators and immunosuppressors, have not been found to modify it. Natalizumab hinders migration of encephalitogenic T-cells into the central nervous system (CNS), reducing inflammatory response. Its impact on CSF oligoclonal bands (OCBs) has not been demonstrated.

Case studies: This report describes its effect in four out of six patients with multiple sclerosis after a mean of 10 infusions: the CSF was negative for OCBs at the second lumbar puncture.

Conclusion: In conclusion, natalizumab treatment can reduce CSF OCBs to undetectable levels, although the clinical significance of this observation is not yet known.

Objective and Methods: In this study, we prospectively analyzed both serum and CSF samples from 24 MSers, before and after 2 years of natalizumab-based therapy.

Results: Our results showed complete (55%) or partial (27%) disappearance of the OCBs in CSF samples that were taken after 2 years of therapy. Intrathecal IgG production, represented by the IgG index and IgGLoc, was also quantitatively reduced.

Conclusion: Our data showed that natalizumab substantially modulates both intrathecal polyclonal and oligoclonal IgG production: This effect was much more potent than was previously reported.


OBJECTIVE:  We aimed to assess the effect of natalizumab on cellular composition and functional B cell parameters including patients withnatalizumab-associated PML (n=37).

METHODS: Cellular composition by flow cytometry, levels of immunoglobulin (Ig)G/IgM by immunonephelometry, and oligoclonal bands by isoelectric focusing were studied in blood and cerebrospinal fluid.

CONCLUSIONS: Natalizumab impacts B and T cell distribution and exerts an inhibitory effect on surrogates of B cell function in periphery and in cerebrospinal fluid, potentially contributing to the increased risk of developing PML.