We have been talking about voxels for MRI and how this affects the image that can be seen.


The smaller the voxels the more clear what is being seen.

However, MRI does not have the resolution of standard histology that is used to view tissues taken from MSers or animal models of MS.

There you could not only see the VW Beetle but you can see the individual parts,which you can piece together to see how things work. 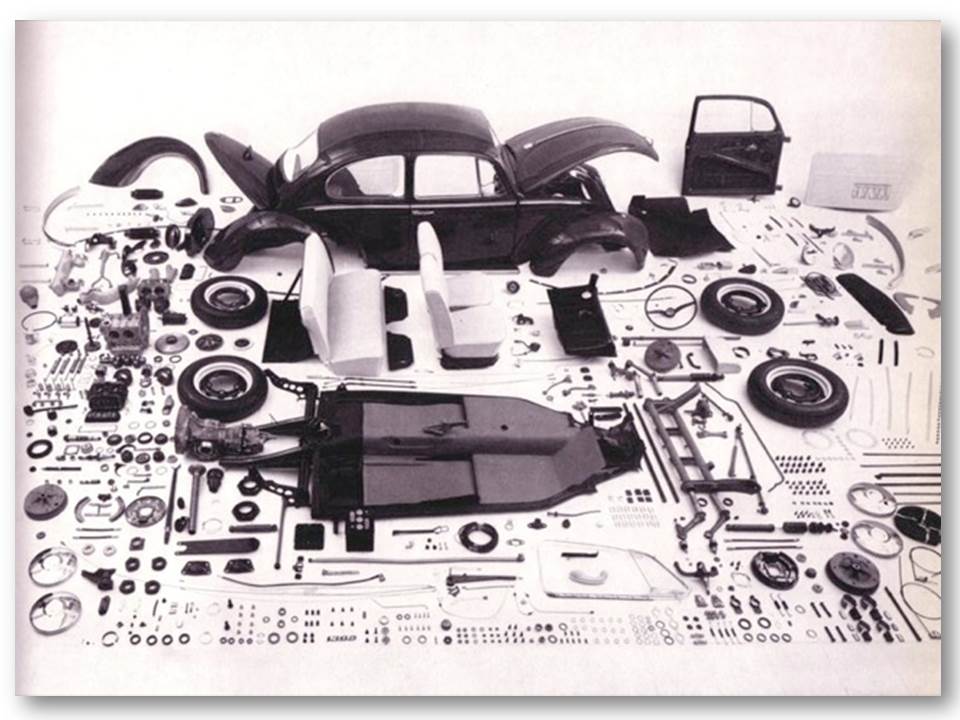 Many of the MRI outcomes do not have a clear histological correlate. There are essentially measuring water moving randomly or constrained by tissue structures  and so the “black holes” seen on T1 images may not be just one thing. They may reflect the increasing space due to increase in water content and/or the loss of tissue.

Early in their formation “hypointense” T1 images clled black holes may reflect combinations of inflammation, demyelination and later may reflect axonal loss. It has been found that more MRI black holes in the brain correlate with accumulating disability, so ideally you don’t want them.

However, brain shrinkage may be another important measure of nerve damage. The brain and spinal cord structure shrinks with the development of MS, notably progressive MS.

In fact every bodies brain shrinks with age and we loose about 0.1% a year. This is part of aging, however in MS this may increase to about 0.4% a year. some drugs slow this rate.

In Altzheimers Disease it is over 1% brain loss per year. You can see loss of brain structures by doing repeated scans of the brain over a period of time. 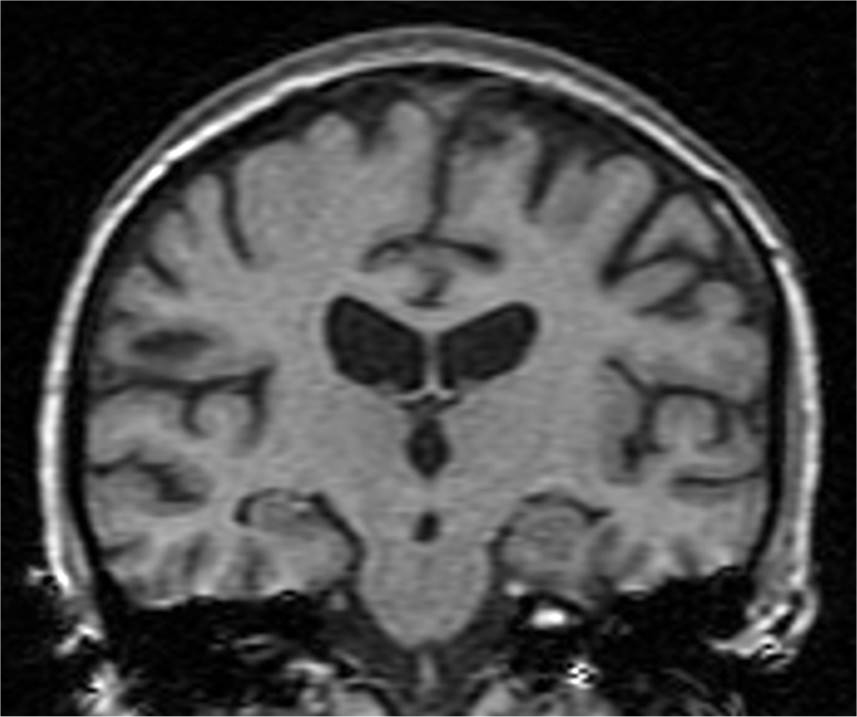 Same brain rescanned. Can you see the ventricles (the two big black circular structures) getting bigger? 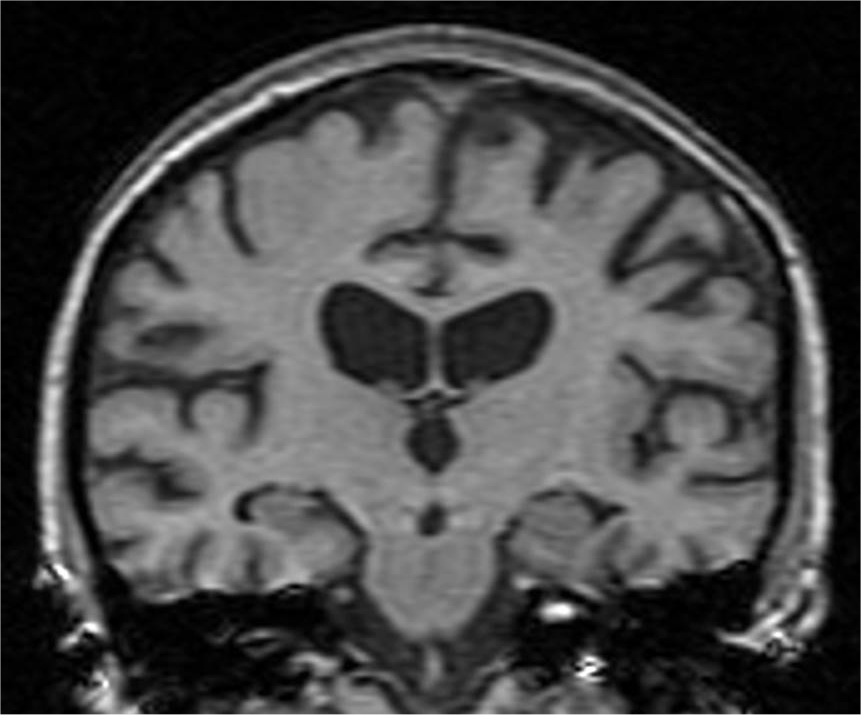 This suggests tissue lost due to increases in the size of the ventricles.

You can use computers to estimate this and below is a series of images taken over time. 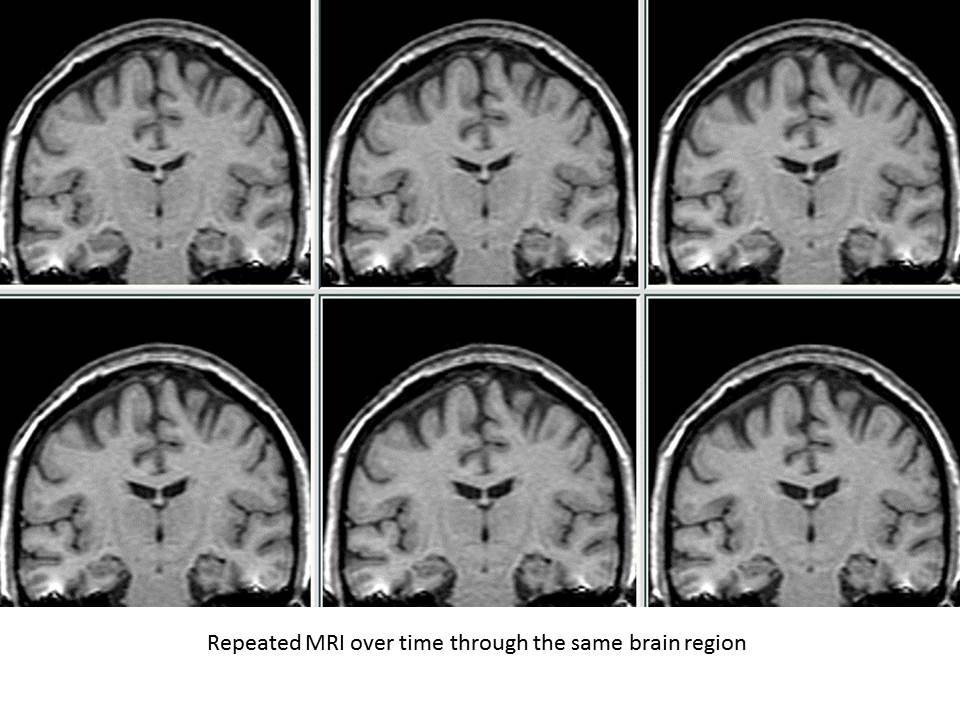 Computers can register the pictures and red colour (below) shows the change/loss of tissue. This occurs here in the sulci/gyri of the cortex and the ventricles in this example 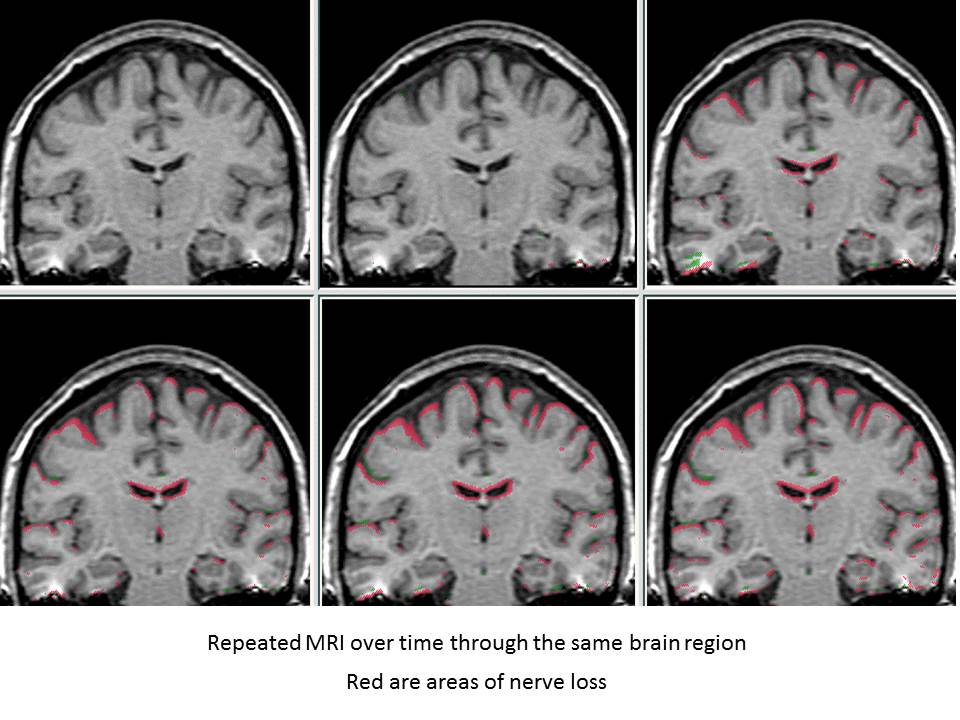 In the progressive MSer below you can see atrophy as seen by the the ventricles getting bigger. 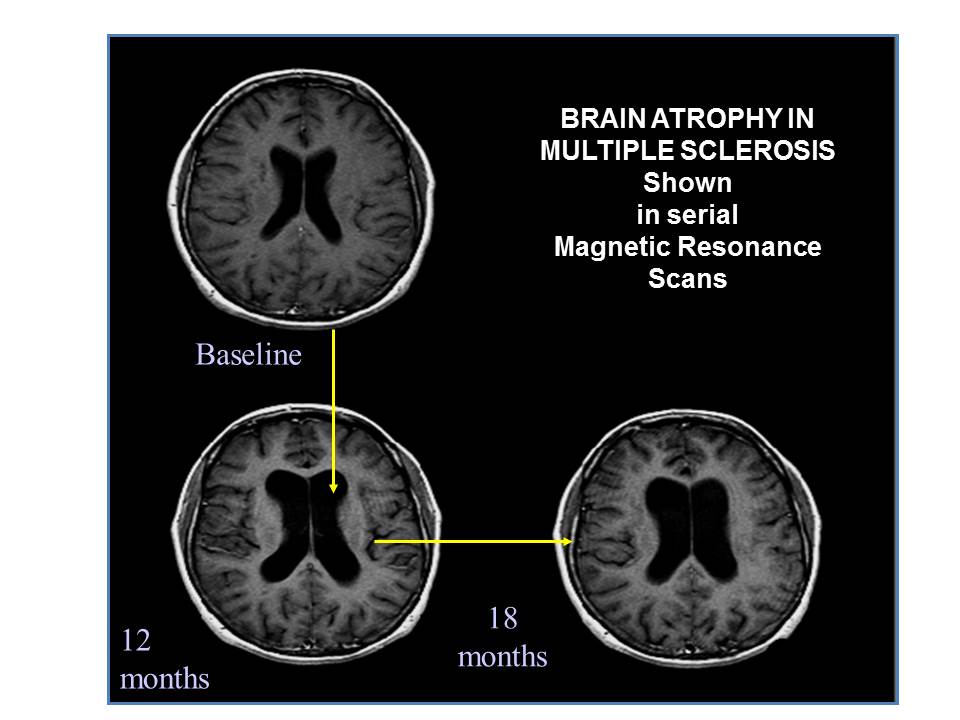 Unfortunately, this is probably the tip of the iceberg and the real amount of nerve atrophy is being masked in part by tissue swelling (oedema) and scarring (gliosis).


We can see this in animal models with MS-like disease.


After 4 attacks in this example,  you can see large areas where the myelin (and nerves have been damaged) shown in the red areas. However you can see that the spinal cord is not shrinking much. 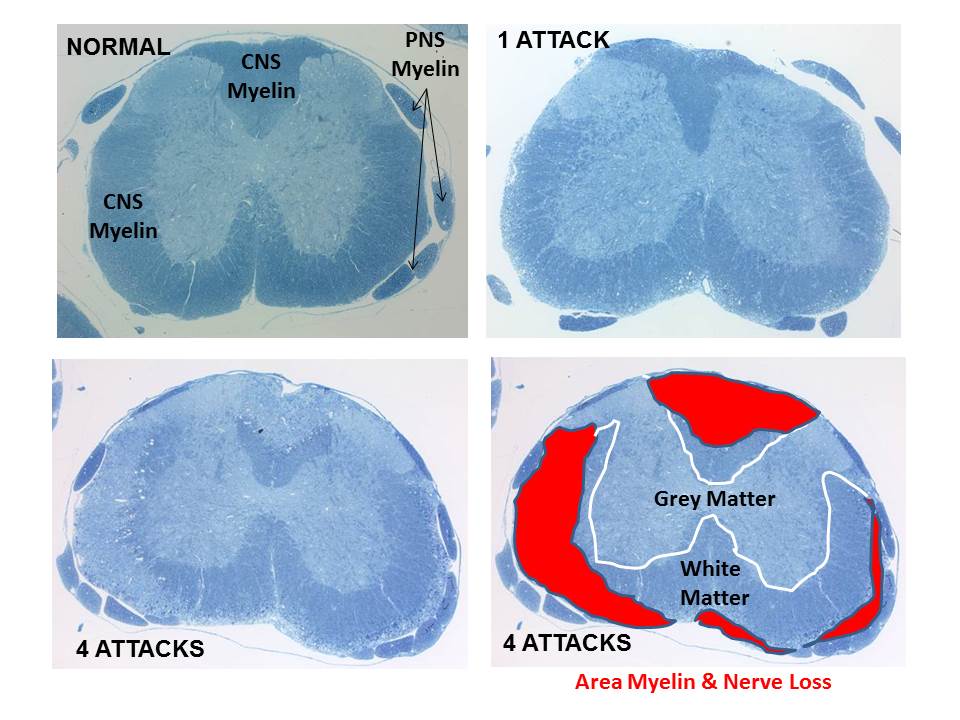 This is because the nerve damage is being replaced with scar tissue made by astrocytes.


In the example below, the lesions develop in the dorsal columns of the spinal cord,which send sensations to the brain. You can see after 4 attacks there is a lot more white colour, which is a reflection of the production of astrocytes called gliosis. 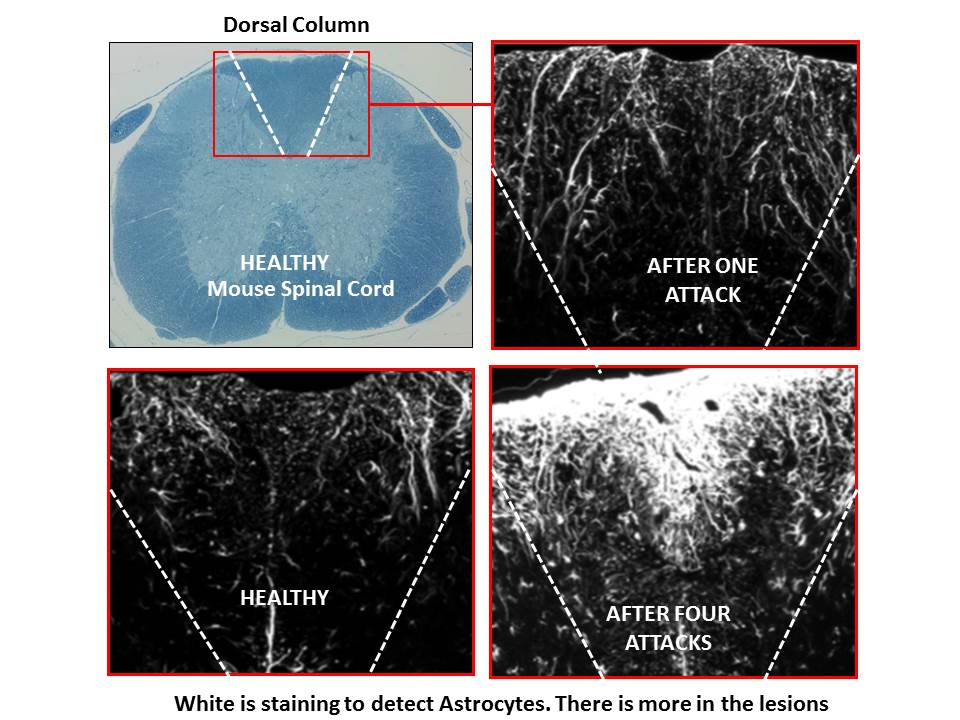 So whilst you can see there is not much atrophy in the size of the spinal cord (e.g. look above), because the nerve loss is masked by the production of scarring, we can see in the animals how much nerve content there is.

In this example although the spinal cord has only shrunk by 10% there was about 80% nerve loss in the nerve tracts examined in this example. Based honour early studies there is about 40% total spinal nerve loss 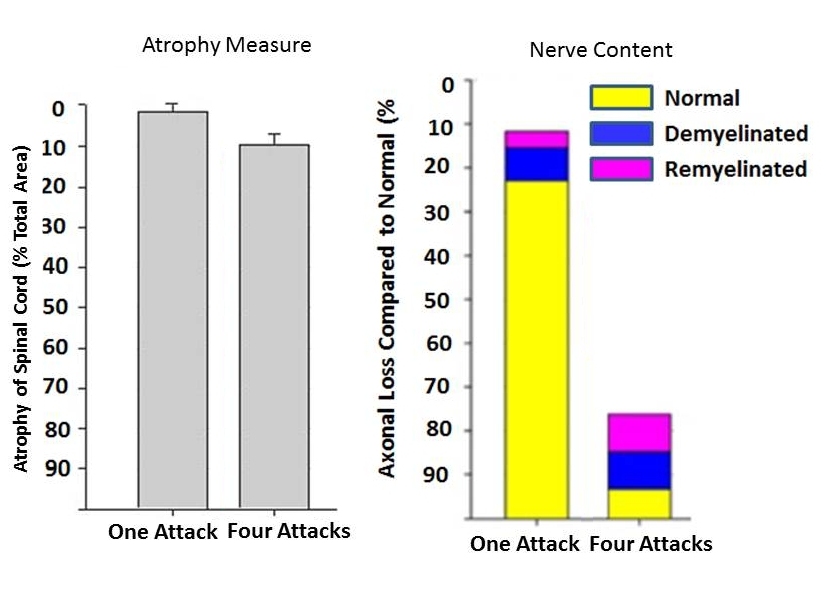 Animals will loose nerves quicker than humans but makes the point the MRI markers of atrophy may miss some nerve loss.

Some studies in MS look at whole brain or spinal cord atrophy (Shrinkage) but others are finding that grey matter shrinkage may be better to look at as white matter changes may be inluenced by swelling.

In some studies aimed at treating progressive nerve damage, the treatment actually made the brain/spinal cord tissue to appear to shrink. This may be because treatments are getting rid of inflammation and swelling this is called “pseudo atrophy”. This happened in the Lamotrigine trial in Progressive MSers, such that potential benefit is seen as failure. This can also occurs following HSCT.