#MSResearch Remyelination for MS on its way

2015 is just a few days old and this is news to celebrate, probably.

The treatment with anti-LINGO-1 appears to support some remyelination as evidenced by less latency of the visual evoked potential following optic neuritis (the bit reported was a trend only). This RENEW study was part of a planned studies in MS and part two will report in 2016.

Other companies will be now go hunting for a small molecule inhibitor that gets in the brain and blocks LINGO-1. They know they can charge a lot for antibodies compared to a chemical. But you could do a lot better

However on the downside the retina thinning, as an indicator of nerve loss is not apparently controlled.

Is this surprising…maybe not. if there is nothing to protect against the inflammatory penumbra (the damage that occurs because of the inflammation) I personally would not expect this mechanism to do that.

However this suggests that the EAE data does not exactly replicate the MS reality. In EAE there was a marked clinical effect. I personally would not have expected this for a repair agent as the damage has to accumulate before repair occur, so disease should have occurred followed by a better recovery. But in the experiments presented disease did not really become manifest. In our hands even strong neuroprotectors do not stop the disease from occurring but it stops the damage accumulating but there is better recovery.

However, the anti-LINGO appeared to remyelinate in the chemical demyelination models. 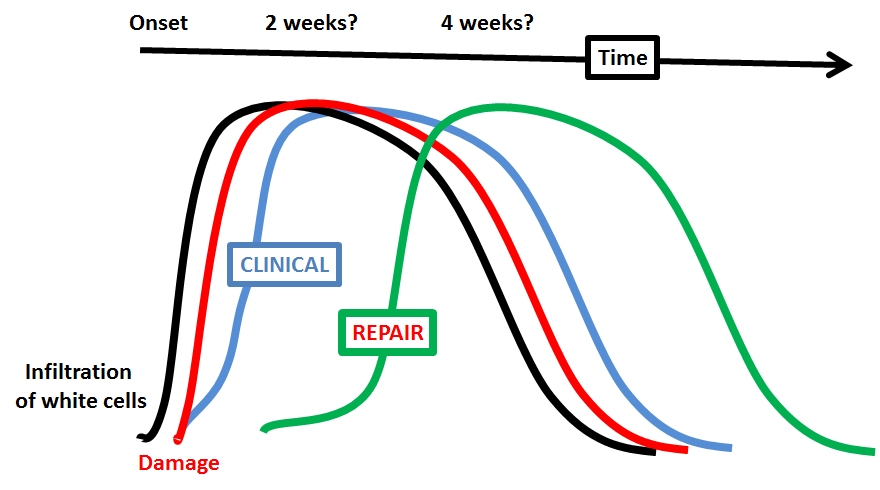 If there is nothing to stop the inflammatory penumbra, then the nerve loss will occur.

They may also not have been quick enough to have an effect. In our trial just finished we had people on drug within two weeks, not four, of the event to try and stop the inflammatory penumbra, we will know soon if it has worked.

It is important to realise that the anti-LINGO can then only remyelinates what survives the insult.

As ProfG previously reported and again shows above, we need immunomodulators at the bottom of the current therapeutic tree to stop the damage in the first place, the stop the nerves being damaged with a neuroprotector and then put the myelin and nerve repair agents on the top.

We know the immunomodulators work and they will deal with the lion’s-share of  problem, but will companies be willing to develop a polypill that targets different bits of the equation. They will have to if they are to get optimum results.

I am encouraged by this but it is just the start. This study is to target the easy bit, the recently demyelinated nerves. Will it work on chronically, demyelinated nerves surrounded by scars? There is no real published pre-clinical data on this so we will have to keep our fingers crossed.

However, we are moving into the age of Repair this is just the beginning.